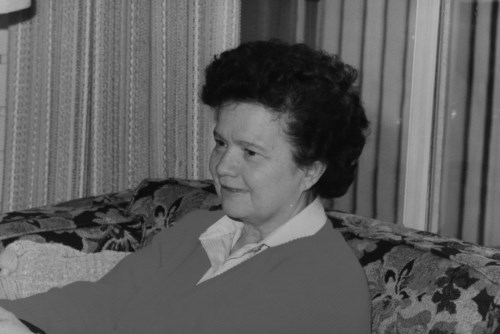 Born Elizabeth Regina Donlin on Dec. 2, 1929, in Wilkes-Barre, she was a daughter of the late Patrick and Mildred Hermit Donlin. She was a member of St. Robert Bellarmine Parish (formerly St. Aloysius Church), Wilkes-Barre, since birth and was a graduate of E.L. Meyers High School, Wilkes-Barre. Betty and her husband, Walter, were married on Aug. 20, 1949, by the Rev. M.J. Dacey.

She was employed by People's Laundry and retired from Sea Isle Sportswear, both in Wilkes-Barre. Following retirement, she went to work part-time at Wilkes-Barre Vocational Technical Center, where she thoroughly enjoyed her time working in the kitchen and spoke highly of all the students and staff she met there.

Betty will always be remembered as a woman who faithfully served her church. Wherever there was a need you would find her, whether it be supporting the many programs she was involved with, baking for the annual bazaar, selling tickets for church raffles or making her famous chocolate covered pretzels and other assorted candies.

In addition to her parents, Betty was preceded in death by her husband, Walter Lawrence Bloss, in 1996; sister, Darlene Louise Donlin; and brother, Edward James Donlin.

She was very proud of her family and adored seeing and talking to them via Skype. She especially loved being able to spend time with Madelynn and Katy and would talk about them quite often.

The family wishes to express their thanks for the excellent care her nieces, Diane Mushal, Hunlock Creek, and Darlene Ashton, Kingston, provided to her during her illness. Betty was blessed to be residing with her brother, Patrick and niece, Darlene, in Kingston this past year.

Betty's friends and neighbors will miss her smile and the many conversations which took place between them. She sincerely appreciated everything they've done for her throughout the years.

Funeral services with a Mass of Christian Burial will be held at 10 a.m. Tuesday in St. Robert Bellarmine Parish, 143 W. Division St., Wilkes-Barre.

To plant trees in memory, please visit our Sympathy Store.
Published by Citizens Voice on Jan. 15, 2021.
MEMORIAL EVENTS
Jan
19
Mass of Christian Burial
10:00a.m.
St. Robert Bellarmine Parish
143 W. Division St, Wilkes-Barre, Pennsylvania
Funeral services provided by:
Daniel J. Hughes Funeral & Cremation Service
GUEST BOOK
Sponsored by Daniel J. Hughes Funeral & Cremation Service.
2 Entries
We are very sorry to hear of the passing of Betty. She was such a lovely lady with a beautiful smile. She was one of the ladies in our parish that I looked up to and admired as she worked tirelessly helping out our parish. Betty will certainly be missed. May she Rest In Peace.
Judy & Todd McCarroll
January 15, 2021
My sympathy to the Bloss family at this time. Betty worked at the W.B.Voctech when I worked there,she was a great person.
Edward Evans
January 15, 2021