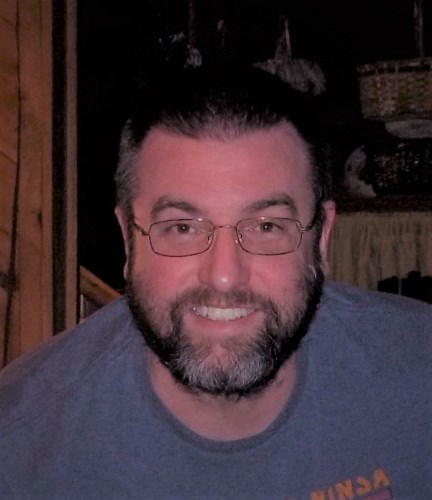 Casey graduated from Northwest Area High School in 1998 and went on to get his bachelor's degree in health physics from Bloomsburg University. He was employed as a health physicist at the University of Pennsylvania for 10 years. No, he was not a PE teacher. He played football and track and field for Northwest Area High School as well as one year of football at Bloomsburg University. Maybe he should have been a PE teacher.

Casey had a highly inquisitive and technical mind with a passion for science and photography. He was always thinking of his next invention and taking a minimum of 50 photos of the same subject to catch every angle and then he'd want to show you each and every one. He was very proud of his fogbow picture that made it on to WNEP. Casey was a patriot and gun enthusiast, buying his first gun at the ripe age of 28, when his wife was out of the country for work. He also enjoyed homebrewing beer and making wine as well as putting a minimum of three condiments on each meal he ate. Casey faced many challenges in life as we all do. Little did he know his biggest challenge would be the 22 5 to 7-year-olds he coached on the Northwest Area Junior Rangers D team for two years where his patience was truly tested.

When Casey wasn't brewing beer or looking into conspiracy theories, he loved being a father. It was his greatest accomplishment next to taking a five minute shower - once. He enjoyed playing catch with his son and passing on his knowledge of football. They also played Madden, where his son would show him all the slow-mo replays repeatedly just like he used to do to his friends. Casey and his daughter loved cooking and playing with snap circuits together. He passed on his love of science to her, starting at a very young age. Hopefully he didn't pass on his love of brewing too soon.

Visitation will be from 4 to 6 p.m. prior to the service at the funeral home.

Private interment will be at the convenience of the family.

Condolences can be made at clswansonfuneralhome.com.

Published by Citizens Voice on Dec. 1, 2021.
To plant trees in memory, please visit the Sympathy Store.
MEMORIAL EVENTS
To offer your sympathy during this difficult time, you can now have memorial trees planted in a National Forest in memory of your loved one.
Funeral services provided by:
Curtis L. Swanson Funeral Home Inc.
MAKE A DONATION
Please consider a donation as requested by the family.
MEMORIES & CONDOLENCES
Sponsored by Curtis L. Swanson Funeral Home Inc..
9 Entries
My thoughts and prayers are with the Lachenmayer family in these difficult times. I have so many fond memories of Aprile, Johnny and Casey growing up. So sorry for your loss.
Dawn Mayer-Doll (Buchman st)
December 14, 2021
So sorry for your loss. Casey was always so nice.
Melissa Notari and Family
School
December 3, 2021
I'm very sorry for your loss.
Desiree Murphy (Fletcher's daughter(step))
December 3, 2021
Our deepest sympathies to you all. The obituary is a beautiful tribute to Casey. Keeping you in our thoughts and prayers and sending our love.
Carissa Biago Armbruster and Family
December 2, 2021
As the days and weeks pass, and as you return to life's routine, may you continue to feel comforted by the love and support of family and friends.
Beverly Solano
December 2, 2021
Our deepest condolences to all. We are shock and in disbelief. We remember all the good times we enjoyed with him and his family. Our prayers and love to all.
Rivas´s
December 1, 2021
Our sympathies,prayers, and love to Becky. Emma, Noah, and the Lachenmayer family.
Joe and Debby biago
Family
December 1, 2021
May your memories of the wonderful times you shared with your loved one comfort you and your family, today and always.
American Heart Association
December 1, 2021
John and Joan, I am so sorry for your loss. Casey was a sweet and funny kid who Peter enjoyed playing with many years ago.
Lani (Thibault) Hall on Buchman St
Other
December 1, 2021
Showing 1 - 9 of 9 results