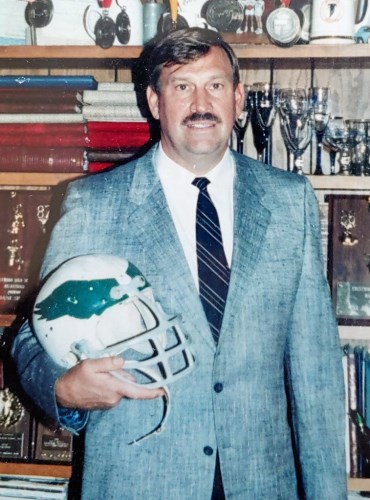 Chuck played football for Penn State from 1958 to 1962 and was a two-time All-East and All-American. He played in three Liberty and Gator Bowls; beat "Bear" Bryant for the school's first Liberty Bowl victory (1959) and was invited to the White House to meet JFK (1962 Gator Bowl). In 1963, he helped lead the College All-Star Team to beat the Green Bay Packers (20-17) for Vince Lombardi's worst defeat. He was president of Sigma Nu Fraternity, an honors student and member of PSU's All-Time Team of 1966. Drafted by the AFL and NFL, Chuck played in the NFL (1963 to 1969) for seven seasons with San Francisco 49ers, Atlanta Falcons, Detroit Lions and Philadelphia Eagles (retired 1970). He was inducted into the Pennsylvania Sports Hall of Fame in 2004.

Chuck went on to teach for 43 years (retired 2002) in public K-12 in the Greater Nanticoke Area and Hazleton Area School Districts, coach high school football and officiated PIAA sports. He also served 14 years as an elected official of the Crestwood School District.

Chuck served in the U.S. Army Reserves. He was a fourth-degree in the Knights of Columbus and a member of St. Jude's Catholic Church, Mountain Top, and St. John Fisher Catholic Church, Boothwyn.

In addition to his parents, Charles Sieminski and Elizabeth Sieminski Casey, Chuck was preceded in death by his brother, Adam Sieminski; and his sister, Mary Ann Vincavage.

Due to the COVID-19 pandemic, a funeral Mass and interment will remain private.

Condolences may be made by visiting www.paganofuneralhome.com.

Published by Citizens Voice on May 20, 2020.
To plant trees in memory, please visit the Sympathy Store.
MEMORIAL EVENTS
To offer your sympathy during this difficult time, you can now have memorial trees planted in a National Forest in memory of your loved one.
MAKE A DONATION
MEMORIES & CONDOLENCES
3 Entries
I was honored to work track meets as a starter with Chuck and Adam. When you saw them walk onto the field, you knew those events would run smoothly. Chuck was not just a great official, he was a better person. So very sorry to hear of his passing.

Joe Curry
Joe Curry
May 23, 2020
A beloved teacher of mine, one of the best human beings I will ever meet. God bless you. May we all meet in paradise and on that day there will be no more tears only everlasting joy. My deepest sympathy to all family members. Deborah Gdovin Rivera
Deborah Gdovin
Student
May 23, 2020
One tough adversary on the gridiron: however, a fine gentleman off the field. My deepest condolences to Barbara and other family members. He will be sorely missed.
Thomas Woodeshick
Friend
May 22, 2020
Showing 1 - 3 of 3 results