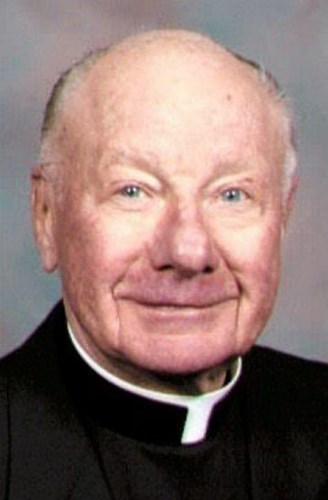 Born in Plains Twp. on Oct. 13, 1926, he was the son of the late Alex and Sophia Mohelski Olszewski.

Father received his early education at Plains Memorial High School, Wyoming Seminary, Kingston and St. Charles College, Catonsville, Maryland. Father entered the seminary at St. Mary's Seminary and University, Baltimore, Maryland, where he earned his bachelor of arts degree in 1947. Father went on to study theology at St. Mary's Seminary and University, where he earned his bachelor of sacred theology in June of 1949 and his licentiate in sacred theology in May of 1951. He was ordained to the priesthood on May 19, 1951, in Saint Peter's Cathedral, Scranton, by the Most Rev. William Joseph Hafey, late Bishop of Scranton.

Father found the most rewarding aspects of his priestly assignments to be administration of the Sacraments; teaching in the parish CCD program and instructing individuals in their journey to prospective conversion to the Catholic faith. Father also spoke the Polish language which allowed him to minister to the Polish speaking of his congregations where language barriers were an issue.

In addition to his parents, Father Olszewski is preceded in death by his brothers, Paul Peter Olszewski and the Honorable Peter Paul Olszewski.

A viewing will take place from 6 to 8 p.m. Tuesday in Sacred Heart of Jesus Church, 215 Lackawanna Ave., Dupont. Solemn Vespers will be celebrated at 8 p.m. following the viewing.

A Pontifical Mass of Christian Burial will be celebrated by the Most Rev. Joseph C. Bambera, D.D., J.C.L., Bishop of Scranton, at 11 a.m. Wednesday in Sacred Heart of Jesus Church.

Interment will be in Saints Peter and Paul Cemetery, Plains Twp.

Condolences may be made to wwwkiesingerfuneralservices.com.
To plant trees in memory, please visit our Sympathy Store.
Published by Citizens Voice on May 1, 2017.
MEMORIAL EVENTS
No memorial events are currently scheduled.
To offer your sympathy during this difficult time, you can now have memorial trees planted in a National Forest in memory of your loved one.
Funeral services provided by:
Kiesinger Funeral Services Inc.
GUEST BOOK
2 Entries
Farewell to our former good neighbor in Laflin. May Father Dan Rest In Peace.
Joseph & Deborah Sellitto
May 1, 2017
I was priveliged to be associated with Father when he assisted Monsignor Toloczko at Holy Trinity Parish in Nanticoke. In his retirement he continued to be a faithful dedicated priest. Throughout his life father gave his life to the church and its commission to baptize and teach. May God now grant him the eternal reward that he so worthily deserves.
Thomas Winarski
May 1, 2017