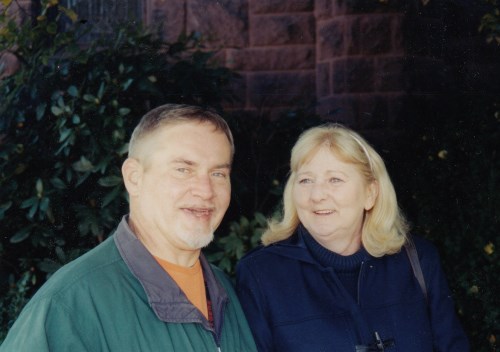 Dorothy J. Kosloski of Hanover Twp., born Dec. 12, 1949, to the late Dorothy J. and Joseph S. Patrick, passed away unexpectedly Tuesday, April 6, 2021, at home after caring for her husband, Michael J. Kosloski, during a long illness.

Michael J. Kosloski Jr. passed away peacefully Friday, May 7, 2021, at ManorCare, Kingston. Michael was just one month shy of his 70th birthday. He was born June 11, 1951, to the late Michael and Anne Kosloski.

It's difficult to speak of them separately because they have been together since their teens. Meeting at the Parrish pool, only 30 days separated them in life and now together eternally in heaven.

He attended Wilkes University on a sports scholarship and received his bachelor's degree. Michael was a teacher, coach and mentor to many local athletes.

Michael and Dorothy had an open door policy at their home. Any time of the day or night they were always welcoming their children's friends into their home.

They were the couple to go to for anyone who needed an ear or a sandwich. Often, you could find the whole neighborhood swimming in their pool or cleaning out their refrigerator.

Later in life, they enjoyed spending time with their grandchildren's activities and sports. They both enjoyed vacationing at the beach with Mike's siblings and relaxing at casinos.

Dorothy attended GAR High School. Although she held many jobs over the years her favorite was being a mom and a grandma. She enjoyed crafting, floral arranging, making candy and cooking.

Dorothy had a sassy spirit and would call in the troops if anyone she loved was being wronged. She had a small stature but a big heart and Michael was her gentle giant.

She was preceded in death by sisters, Joanne Crimmins, Allentown; Darlene Folger, Wisconsin.

A celebration of their lives will be held at a later date to accommodate family.

To plant trees in memory, please visit our Sympathy Store.
Published by Citizens Voice on May 13, 2021.
MEMORIAL EVENTS
No memorial events are currently scheduled.
To offer your sympathy during this difficult time, you can now have memorial trees planted in a National Forest in memory of your loved one.
MEMORIES & CONDOLENCES
7 Entries
Dear Mike and family, So sorry and totally shocked to hear about the passing of your parents. They were great people who truly loved family first, always active in both you and your sisters activities. I can just imagine how difficult it must be for your entire family losing both parents so close together. Please accept my sincere condolences in this most difficult time. Al Kopacz Venice, FL
Al Kopacz
May 17, 2021
Years rolled down my face reading this beautiful tribute ..this has truly captured their spirit completely..I have such beautiful memories of both of them ..always treating me and my children as family
Debra Formola
May 15, 2021
Micheal, Susan, Dorothy, and your entire family. I am sorry for loss. Your parents were wonderful people and always treated me well. Im glad I had the pleasure of knowing them. My thoughts and prayers are with all of you during this difficult time. Lisa Malloy
Lisa Malloy
May 15, 2021
I knew Michael growing up back in the '60's. He was a really nice guy. This is such a difficult loss. My prayers and thoughts are with all of you at this most difficult time.
Manus Mulherin
May 14, 2021
So sorry to see this. I didn't recognize Mike at first. Then I realized that I had worked with him at Sallie Mae years ago! What a smart, friendly, warm person he was. May he and his wife RIP.
Maria Tosh
May 14, 2021
So sorry to see this obit on your sister and her husband. My sympathy to you. You always spoke so warmly of all of your family but you will have great memories.
Anita Muhlbauer
May 13, 2021
Joan and Ned, I'm so very sorry for your loss.
Joan and Rick Hoggarth
May 13, 2021