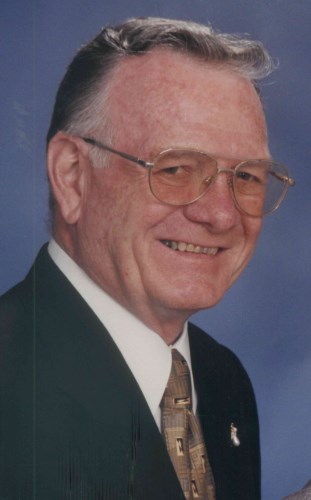 Born June 19, 1929, in Pittston, Jack was the son of the late Simon and Marcella Walsh Brogan.

Jack was a graduate of Exeter High School, Class of 1946, and after graduation, he enlisted with the U.S. Navy, serving his country on a minesweeper from 1946-1948.

Following in the footsteps of his father, he joined the business his father started on Main Street in Pittston, Sime Brogan's Clothing Store, eventually becoming the owner of the store and operating it until his retirement in 1988.

Retirement was not a word in Jack's vocabulary. Following the closing of his family business, he worked as a courier for Cefalo and Associates Law Firm, and also for the Gubbiotti Funeral Home LLC, Exeter, working there for over 25 years, most notably as the official hearse driver.

Active within his community, Jack was a member of many organizations, including the American Legion Post 833, Exeter; the Exeter Lions Club, with whom he held many posts throughout the years; the Greater Pittston Friendly Sons of St. Patrick, being given the distinct honor of "Man of the Year"; the Knights of Columbus, John F. Kennedy Council 372, Pittston, and its Fourth Degree Assembly 948; and the Naval Mine Warfare Association.

Jack was known for his passion for music! He was a member of the American Federation of Musicians, Local 140, Wilkes-Barre; was the alto saxophone player and manager of Cino Paci Band; and a member of the Catholic Choral Society.

A faithful Catholic, Jack was a member of St. Barbara's Parish, St. Cecilia's Church, Exeter, singing in its choir for many years.

In addition to his parents, Jack was preceded in death by his beloved wife, the former Louisa Altoe, with whom he shared 62 years of marriage; and his sister, MaryAnn 'Nancy' Flood.

Relatives and friends are invited to Jack's viewing which will be held from 4 to 7 p.m. Thursday in St. Barbara's Parish, St. Cecilia's worship site, 1670 Wyoming Ave., Exeter.

Interment will follow in Mount Olivet Roman Catholic Cemetery, Wyoming, where military honors will be offered by the United States Navy.

Funeral arrangements have been entrusted to the care of his friends at Gubbiotti Funeral Home LLC, 1030 Wyoming Ave., Exeter.

To send an expression of sympathy or a condolence, please visit www.gubbiottifh.com.

Published by Citizens Voice from Nov. 28 to Nov. 29, 2021.
To plant trees in memory, please visit the Sympathy Store.
MEMORIAL EVENTS
Dec
2
Viewing
4:00p.m. - 7:00p.m.
Saint Barbara's Parish, Saint Cecilia's worship site
1670 Wyoming Avenue, Exeter, PA
Dec
3
Mass of Christian Burial
9:30a.m.
Saint Barbara's Parish, Saint Cecilia's worship site
1670 Wyoming Avenue, Exeter, PA
Funeral services provided by:
Gubbiotti Funeral Home, LLC
MAKE A DONATION
MEMORIES & CONDOLENCES
Sponsored by Gubbiotti Funeral Home, LLC.
9 Entries
My sympathy to Jack's family. Jack always seemed like a nice man, I would see him when he sang with the Catholic Choral Society. Also saw him playing sax on the "band cart" a couple years ago in Jessup's St. Ubaldo parade.
Rosaire Betti
December 14, 2021
Sincere condolences to the family. Jack and Louise were good neighbors back when I lived almost next door. I even have movies of Jack jumping over the fence to his yard. He always remembered me when we'd meet, usually at Gubbiotti's. This very nice man will be missed. Please say hi to my parents from me when they meet you at the Gates.
Linda Kubasti Ninotti
Friend
November 30, 2021
Wanted to offer my sincere condolences to you and the family Sime.. We lost one of the "Legends" - David DeFaveri
David DeFaveri
Friend
November 30, 2021
Glad to be a friend of Jack. May he rest in the palm of HIS hands. Deepest sympathy to his family.
Susan Reinert Hintze
Friend
November 29, 2021
Everyone loved this guy.
Anonymous
November 29, 2021
A true gentleman! Rest in Peace.
Susan Baloga
November 29, 2021
Sending our sympathy to all. Our thoughts and prayers are with you, as we celebrate the life of a very special person. Unfortunately we were unable to get a flight. We all have wonderful family memories of times at the Brogan house.
Jimmy and Ruth
Family
November 29, 2021
Jack's Family, Remembering a great guy good soul; good friendly talks at our garage and also years ago at his clothing store.May your faith and memories bring comfort to all.Memory Eternal Jack!!! Jim &Justine Borino
[email protected]
Friend
November 29, 2021
Friends forever through the Knights of Columbus When my husband and Jack were active and still remained friends after His death 20 years ago jack was a man`s man he will be missed Rest in Peace my friend
Joan Mc Fadden
November 28, 2021
Showing 1 - 9 of 9 results