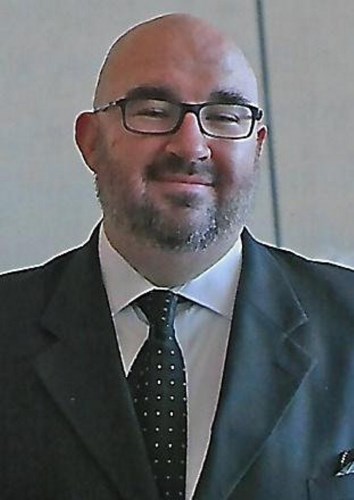 Born Feb. 18, 1975 in Wilkes-Barre, he was the middle of three sons to the late Randolph S. "Randy" and Constance A. "Connie" (Soltis) Yanoshak.

Until illness caused his early retirement from professional duties, Ryan had been employed as the managing director of marketing communications with the Pocono International Raceway in Long Pond for two years. Prior to that, he was assistant athletic director and special assistant to the executive athletic director at the United States Military Academy, West Point, N.Y. Before going to West Point, he spent three years as a graduate assistant and sports information director at East Stroudsburg University. Previously, he was employed by The Citizens' Voice newspaper, Wilkes-Barre, as a sports writer.

Ryan was preceded in death also untimely by his father, Randolph S. "Randy" Yanoshak on March 6, 2009, and by his mother, Constance A. "Connie" (Soltis) Yanoshak on April 8, 2014. He was also preceded in death by his paternal grandparents, John and Shirley (Bruso) Yanoshak and by his maternal grandparents, John Soltis in 2002 and most recently by Eleanor (Dymond) Soltis-Sofranko on Aug. 17 of this year.

Left to mourn his passing are his brothers, Randy Stephen Yanoshak Jr. and his wife, Maria of Wrentham, Mass.; and Corey Yanoshak and his wife, Amy of Dover, Del.; nieces and nephews, Annika, Cole, Ava and Lincoln Yanoshak; his companion of seven years, Brenda Beretta of Marlboro, N.J.; paternal aunts and uncle, Sharyn Yanoshak of Las Vegas, Nev.; Gayle Miles and Jill Gagliardi, both of Hanover Twp., John Yanoshak of Media; maternal uncles, John and Mary Beth Soltis of Drums and Andrew Soltis and his wife, Brenda, of Limerick; several cousins, co-workers and dear friends.

Interment with the rites of committal will immediately follow next to his parents in Oaklawn Cemetery, 1250 S. Main St., Hanover Twp.

Relatives and friends are invited to join Ryan's brothers and family for visitation and remembrances from 4 to 7 p.m. Sunday at the Wilkes-Barre Heights location of the John V. Morris Family Funeral Homes Inc., 281 E. Northampton St., and Monday directly at church from 10:30 a.m. until the time of services.

In lieu of floral tributes, Ryan's family would be humbled if those contemplating a memorial contribution in his memory, kindly consider his church, Saint Peter's Lutheran Church, 1000 S. Main St., Hanover Twp.

To send Ryan's brothers and family online words of comfort, a shared remembrance during this holiday season or for daily grief support messages, please visit Ryan's memorial page on our family's website at www.johnvmorrisfuneralhome.com.
To plant trees in memory, please visit our Sympathy Store.
Published by Citizens Voice on Dec. 9, 2017.
MEMORIAL EVENTS
No memorial events are currently scheduled.
To offer your sympathy during this difficult time, you can now have memorial trees planted in a National Forest in memory of your loved one.
Funeral services provided by:
John V. Morris Family Funeral Homes Inc.- Wilkes-Barre Heights
GUEST BOOK
12 Entries
Sorry for your loss. May you find peace and hope in the days ahead by trusting in God. Romans 15:13.
Martha
December 12, 2017
Randy, I remember going on a date with your little brother in the back seat of the car. My sincerest condolences. Please extend them to your family. Regards, Missy Ruskoski
Melissa Corea
December 11, 2017
Dear Randy and Corey,Your brother will be missed by many people he touched.We have very fond memories of Ryan and my two son's growing up in Lyndwood. Now he can rest in peace with your Mom and Dad. Our prayers are with you and your family.
Alan & Marytherese Nice Sr.
December 11, 2017
My most sincere condolences on Ryan's passing. I got to know Ryan when my son was a cadet at West Point and involved with athletics there. Ryan was such a friendly, outgoing guy. Everyone thought so highly of him. My thought and prayers are with you all at this very difficult time.
Jim Horvath
December 11, 2017
My thoughts and prayers go out to Randy and Corey, and the entire Yanoshak family. Ryan was taken way too soon, but touched so many lives in his 42 years, and leaves behind so many great memories with so many people. Thank you for letting me be one of those people. May you Rest In Peace.
Rob Leskosky
December 10, 2017
We are so very sorry for all family and friends who are mourning Ryan's passing. May our Father God grant you His peace. Ryan was part of a wonderful Christian family and raised to know the Savior Jesus Christ. With this knowledge we have peace through hope. Hope through faith. And faith through Gods grace. Love, Joe ,June Sonnenberg
June Sonnenberg
December 10, 2017
I had the privilege to hire and work with Ryan at ESU. He was the ultimate professional and a special human being. He will be missed! My prayers go out to his family.
TG
December 9, 2017
Thank you very much for offering me the opportunity to volunteer with your department this past Summer. While I was sad that I was unable to take the opportunity in the end, I am nonetheless grateful for your kindness and will pray for God's providence upon you and your family. Rest in peace.
Steven Taranto
December 9, 2017
Thoughts and prayers for all the family. May he rest peacefully.
Sharon Scarborough
December 9, 2017
So sorry for your family's loss corey. Prayers to all, too many have been taken from us too soon.

God bless you all.
Tim Morrissey
December 9, 2017
Ryan, we will all miss you at pocono. Your easy way with people made working with you more like a friendship than a job.

To Ryan's family: From my family to yours our thoughts and prayers are with you during this difficult time.