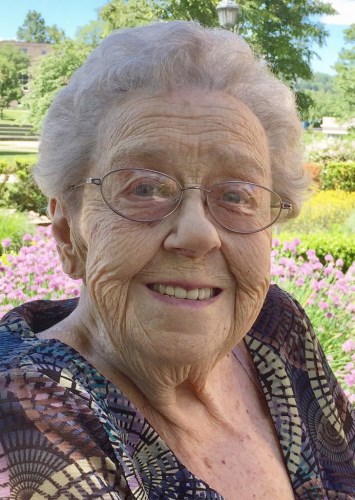 She was born in Nanticoke on June 5, 1932, the daughter of the late Peter and Pearl Walkowiak Helmecki. She was a life resident of Glen Lyon, where she graduated from the Newport Twp. High School, Class of 1950.

She was employed by Harris Semi-Conductor Co., Mountain Top as an assembler tester until her retirement.

Theresa was the only daughter and youngest child of a family of six. She enjoyed traveling and was proud of her Polish heritage. She was a devoted mother and grandmother to her children and grandchildren, including the Arch Street kids.

Preceding her in death were her husband of 42 years, Stanley J. Gorney, on Nov. 7, 1994; son, Daniel Gorney, in 2004; and brothers, Alphonse, Peter, John, Michael and Leonard Helmecki.

Interment will be in St. Adalbert's Cemetery, Glen Lyon.

Family and friends may call from 5 to 8 p.m. Thursday.
To plant trees in memory, please visit our Sympathy Store.
Published by Citizens Voice on Dec. 19, 2017.
MEMORIAL EVENTS
No memorial events are currently scheduled.
To offer your sympathy during this difficult time, you can now have memorial trees planted in a National Forest in memory of your loved one.
Funeral services provided by:
George A Strish Inc Funeral Home
GUEST BOOK
7 Entries
Family, loving condolences to you all! Cioci Theresa was a grand gal...loving, funny, straightforward! We'll miss her!
Michaelene Geiser
December 25, 2017
Theresa was one SPECIAL lady. Everyone loved her and she will be missed.
Joy Bird
December 20, 2017
Mark, Paul and family.
So sorry to read the passing of your mother and grandmother. She was a wonderful lady. I always enjoyed her company. Comfort and strength in this difficult time.
Patricia Smiga
December 19, 2017
Mark, and Lauren and Mark jr. so very sorry for your loss. Cookie Theresa's
friend
December 19, 2017
Mark and family,
I am very sorry for your loss. May God grant her eternal Peace.
Cathy Sebia Sincavage
December 19, 2017
Dear Gorney Family
So sorry to hear of your Mothers passing. We worked together for years, and she was such a wonderful lady.
RIP Terry
Sandra Michaels
December 19, 2017
Mark and family I am so sorry for you loss keeping you in my thoughts and prayers.
Jackie Straub
December 19, 2017