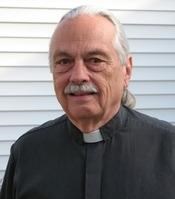 BORN
1936
DIED
2021
FUNERAL HOME
Penwell-Gabel Cremations, Funerals & Receptions
1321 SW 10th Ave
Topeka, KS
Arthur John Rathbun, Jr.
Manhattan - Arthur John Rathbun, Jr., 85, Manhattan, KS, died Sunday, August 1, 2021, at Stormont Vail Hospital, Topeka, KS, after a brief illness.
Arthur was born in Erie, PA on April 11, 1936, to Arthur John Rathbun, Sr. and Bernice (Wiler) Rathbun. He received a BS in Psychology from Penn State University, a Masters in Divinity from General Theology Seminary in New York City in 1962, and later a Masters in Counseling from Kansas State University.
Throughout his 57 years in the ordained ministry, "Father Art" served many churches in three different Episcopal Dioceses. He started as college chaplain in Edinboro, PA, in the 60s, where he was also very involved with the civil rights movement and working with high-need urban youth. After moving with his family to Kansas in the 70s, Arthur was the vicar at the Church of the Incarnation and then the Dean of Christ Cathedral, both in Salina. He was also the vicar of numerous small congregations in PA and KS, and, most recently, a supply priest for the Diocese of Kansas (filling in as vicar for many congregations as needed), while teaching the next generation of clergy at the Bishop Kemper School for Ministry. He led countless large scale fund-raising projects for the Episcopal Dioceses in Kansas, and worked with many small parishes to write grants for community outreach and parish development programs.
He had a special talent for constructing sermons that were meaningful, relatable, and to the point, sermons which effortlessly intertwined theology and scenes from his life, and from the lives of family and friends - and he gave his sermons entirely without notes! He delivered what would be his final sermon at St. Paul's Episcopal Church, Manhattan, KS, days before he was hospitalized (you can see it at <https://fb.watch/79SV1XLRS3/>, with the sermon beginning 24:50, and we would encourage all to listen, regardless of your belief system). It begins with one of his favorite phrases, one he sincerely believed: "It's another great day in the Kingdom!"
Arthur also worked for many years at the Kansas State University Counseling Services, where he taught Stress Management and Biofeedback, becoming known as "Mr. Stress Management." He had a particular focus on helping students in need learn to survive and thrive in college, as well as teaching classes on unlocking creativity, and giving hundreds of presentations on stress management. In addition, he helped develop and taught an online stress management course with the goal of reaching and helping even more students.
Near the end of his careers, Arthur "retired" several times: from full-time church work, twice from the Counseling Services, and most recently (2019) from teaching classes through KState's Global Campus. But none of these retirements seemed to stick, as he was always willing to take on another task, another responsibility, and always willing to pitch in any time he saw there was more "work to do."
Arthur was a big football fan, too, especially Penn State and KState football, and an avid reader, continually keeping a book in the car, just in case. He was involved with raising and showing Arabian horses for over 40 years, enjoyed a good cocktail in the evening, relaxing on the porch, and had a great, if often irreverent, sense of humor.
Together with his first wife, Trudy (Gier), he raised three children, of whom he was so proud. Arthur and his second wife Theresa (Lewis) were married June 6, 1987. Arthur is preceded in death by his parents and infant daughter Juliann. He is survived by wife Theresa, daughters Holly (and grandsons Kaiser and Coen DeMaranville) and Jill (Jonathan Davis), son A.J. (Natalie Fuller), brother Gary and his children, and former spouse, Trudy James.
Arthur was a perfect example of an optimist: giving care, assurance, and tools for life to so many people. He lived a life that gave without concern for receiving, providing much, yet asking very little, a true servant leader. He said and believed that "life is a mystery, love is the clue," that we should "take care of one another, love one another," and that "we must all stay together in prayer." Those words are the legacy that he would want to leave us with.
Although Arthur presided over countless funerals and believed in honoring death as a part of life's journey, he did not want to inconvenience those that may have to travel to attend his funeral. With that, in place of a service, his family asks that you assist with his final fund-raising efforts and remember him in your own, personal way. Memorial contributions in his memory are being directed to "The Rev. Arthur Rathbun Memorial Fund," which will support the work of the Bethany Garden Project and Bishop Kemper School for Ministry. Checks may be sent to: The Episcopal Diocese of Kansas, 835 SW Polk St., Topeka, KS 66612-1688. Online donations are welcomed through <https://episcopal-ks.networkforgood.com/>. Select "The Rev. Arthur Rathbun Memorial Fund." To leave a message for Arthur's family, please visit www.PenwellGabelTopeka.com.
Published by Topeka Capital-Journal from Aug. 7 to Aug. 8, 2021.
To plant trees in memory, please visit the Sympathy Store.
MEMORIAL EVENTS
To offer your sympathy during this difficult time, you can now have memorial trees planted in a National Forest in memory of your loved one.
Funeral services provided by:
Penwell-Gabel Cremations, Funerals & Receptions
MAKE A DONATION
MEMORIES & CONDOLENCES
Sponsored by CJOnline.com.
0 Entries
Be the first to post a memory or condolences.