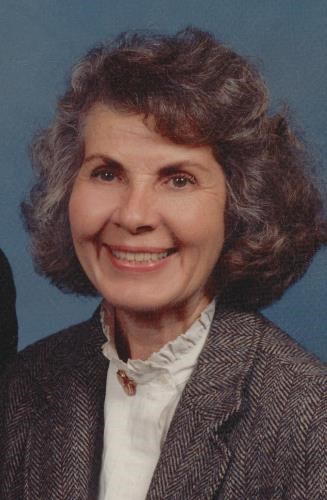 Nova was an accomplished seamstress, wonderful cook, and enjoyed collecting antiques and refinishing furniture. She worked at Jostens in Topeka and retired as a group leader after twenty-one years of service. She loved getting her family together for holiday dinners and especially loved spending time with all of her grandchildren.

She was a member of the Perry United Methodist Church. While her children were growing up she served on church committees and helped with Boy Scouts and Girl Scouts.

Nova married the love of her life, Donald Gene Cottrell, on December 24, 1949, in Topeka. He passed away on December 1, 2019. They would have celebrated their 70th wedding anniversary this past Christmas Eve.

The Topeka Cemetery has offered honorary grave space for the Cottrell's near the grave of Vice President Charles Curtis where the family plans to place a memorial stone.

She was preceded in death by two sisters, Geneva Miller and Rosalie McQueen, and one grandson, infant Donald E. Cottrell.

A private family service will be held at a later date. Memorials may be made to Jefferson County Friends of Hospice or Perry United Methodist Church in care of Rumsey-Yost Funeral Home, 601 Indiana Street, Lawrence, KS 66044.
Published by Topeka Capital-Journal from Apr. 8 to Apr. 9, 2020.
To plant trees in memory, please visit the Sympathy Store.
MEMORIAL EVENTS
To offer your sympathy during this difficult time, you can now have memorial trees planted in a National Forest in memory of your loved one.
Funeral services provided by:
Rumsey-Yost Funeral Home & Crematory
MAKE A DONATION
MEMORIES & CONDOLENCES
Sponsored by CJOnline.com.
5 Entries
I volunteered at the Curtis home for a short time and enjoyed getting to know Nova, her husband and her daughter, Patty. I just heard about her passing due to the Curtis home being put up for sale.
Patty and family, I’m so very sorry for your loss.
Sherilyn Cook
Friend
January 13, 2021
So sorry for your loss my god be with you
Love you both You friend Stanley Hayden
April 9, 2020
James and Gene,
So sorry about your loss. Stay strong brothers.
Rick
April 9, 2020
Sincere sympathies to Novas family.
I worked with Nova at Jostens.
I always thought she was so knowledgeable, so talented and a truely amazing person.
She will be missed.
Deborah Trekell
April 9, 2020
I am extending my deepest sympathy to the Cottrell family. I don't mean to intrude by asking this question. But I was wondering if Nova was related to Ella Mae Cottrell. Ella Mae would have been approximately 100 years old by now. She was my grandmother's neighbor in Topeka.
Dottie Clark
April 8, 2020
Showing 1 - 5 of 5 results