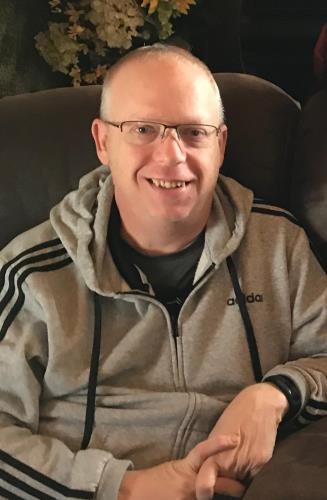 He was born August 26, 1970 in San Antonio, TX the son of Fred Granberry and Judith (Pancoast) Foster.

Russell grew up in San Antonio and graduated from John Marshall High School with the class of 1989. He then went on to serve his country in the United States Coast Guard from 1989 to 2005, attaining the rank of Petty Officer Second Class. Following his military service, Russell graduated from Friends University, Wichita, KS with a degree in Accounting. During his military service he was stationed in Mobile, AL, Elizabeth City, NC, Oklahoma City, Ok, Cleveland, OH, Brookings, OR, and Topeka, KS.

Russell was a military pay technician for the United States Coast Guard of Topeka during his working years.

On July 16, 2005 Russell was united in marriage to Marta Hedberg at Stotler Covenant Church. They recently celebrated their fifteenth year of marriage.

Russell attended Topeka Bible Church, Topeka, KS. He was a lifelong Texas Longhorns fan and in his youth a Houston Oilers fan. He loved statistics and data collecting. He loved Stratamatic sports games. He also enjoyed fantasy football and won his work league many times over the years. Recently he had begun a new hobby of Warhammer and enjoyed painting the figures. Over his years, in Kansas, he had also adopted the Kansas City Royals as his favorite baseball team.

He was preceded in death by his father Fred Granberry.

Following Covid-19 guidelines that require masks and social distancing, memorial funeral services will be at 2:00 p.m., Saturday, January 2, 2021, at Topeka Bible Church, Topeka, KS. Interment will follow at a later date at Rapp Cemetery. The service will be live streamed on the funeral home Facebook page for friends wanting to pay their respects. The family suggests memorials to Topeka Rescue Mission.

Memorials may be sent c/o Lamb-Roberts-Price Funeral Home, P.O. Box 194, Burlingame, Kansas, 66413. Condolences may be e-mailed to the family through www.lamb-roberts.com.

Published by Topeka Capital-Journal from Jan. 1 to Jan. 2, 2021.
To plant trees in memory, please visit the Sympathy Store.
MEMORIAL EVENTS
Jan
2
Memorial service
2:00p.m.
Topeka Bible Church
1135 SW College Ave., Topeka, KS
Funeral services provided by:
Lamb-Roberts-Price Funeral Home - Overbrook
MAKE A DONATION
MEMORIES & CONDOLENCES
Sponsored by CJOnline.com.
2 Entries
Russ really was a great fellow. His legacy with the Coast Guard, in uniform and as a civilian, will long live on in the memories of his coworkers and the many people in the field he served so selflessly and with such great affection. He was a mensch and more than that. He will be missed. He is, I am sure, with the Lord.
Matthew OConnell
Coworker
January 4, 2021
I'm was shocked and saddened to hear about Russ's passing. He was my roommate when we were stationed in Mobile, AL. He was a good friend, and along with our other roommates, we had a lot good times. He is in the presence of the Lord. Rest well brother.
Patrick Hull
Served In Military Together
January 1, 2021
Showing 1 - 2 of 2 results