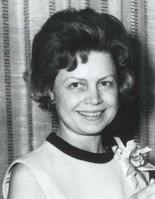 BORN
1920
DIED
2021
FUNERAL HOME
Penwell-Gabel Cremations, Funerals & Receptions
1321 SW 10th Ave
Topeka, KS
Ruth M. Kennedy
Ottawa - Ruth M. Kennedy, 101, Ottawa, formerly of Topeka, passed away Monday, August 2, 2021.
She was born March 15, 1920, in Denison, Kansas, the daughter of Noel E. and Mabel (Lyon) Coleman. Ruth grew up on a farm and attended North Star Grade School and graduated from Hoyt High School in 1937. She loved her pony, Bess and rode the five miles to the one room school house on her whenever she could. She graduated from Strickler's Business College and took her first job in Emporia where she met Tom Kennedy while he was attending Emporia State in 1939.
Ruth married Lt. Kennedy in June 1942 during WWII at Fort Sill, Oklahoma. He worked his way through the ranks to Brigadier General. They were married for over 72 years until his passing in 2014.
As soon as her youngest child started school, she started working full time, and at that time was one the few women who managed a full house of kids and a full time job. She earned her way as secretary to two Superintendents of USD 501.
In 1968 Tom was called to active duty and they relocated to Ft. Carson, Colorado where Tom was Commander of the 69th Brigade. They enjoyed that time in Colorado spending many weekends doing short road trips through the mountains and enjoying the beauty of Colorado whenever possible.
Ruth and Tom enjoyed many activities together including bridge, bird watching, square dancing, Knife and Fork Club, Topeka Civic Theatre, traveling, and the Topeka Garden Club. They had a beautiful garden and yard full of flowers and produce that was the envy of many.
She was a beautiful lady inside and out and will be missed.
She is survived by her daughters, Sandra Kokker (Tom Baumann), and Betsy (Ray) Steanson; son, Lt. Col. (Ret.) Michael (Jan) Kennedy; three grandsons, Jason, Zachary and Brian (Megan); three great-granddaughters, Cameron, Austyn, and Addison; sister, Dr. Marilyn Coleman (Larry); sister-in-law, Dollie Petr; numerous nieces and nephews; and longtime friend, Loma Putnam.
She was preceded in death by her parents, husband, and brothers, Alan and Roy Coleman.
A private family graveside will be 10:30 am, Thursday, August 5, 2021 at the Denison Cemetery. In lieu of flowers, memorial contributions may be made to the Topeka Rescue Mission, Inc., PO Box 8350, Topeka, KS 66608 or Disabled American Veterans (DAV), 2200 SW Gage Blvd, Topeka, KS 66622. To leave a message for Ruth's family, please visit www.PenwellGabelTopeka.com.
Published by Topeka Capital-Journal from Aug. 3 to Aug. 4, 2021.
To plant trees in memory, please visit the Sympathy Store.
MEMORIAL EVENTS
To offer your sympathy during this difficult time, you can now have memorial trees planted in a National Forest in memory of your loved one.
Funeral services provided by:
Penwell-Gabel Cremations, Funerals & Receptions
MAKE A DONATION
Please consider a donation as requested by the family.
MEMORIES & CONDOLENCES
Sponsored by CJOnline.com.
0 Entries
Be the first to post a memory or condolences.