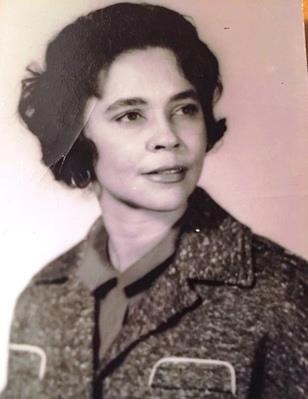 Jackson - Maude Lerita Williams Ballou (September 13, 1925- August 26, 2019) was born in Fairfort, Alabama to Mary and Rev. Hillary Parker Williams. She was a graduate of Southern University in Baton Rouge, Louisiana with a BS degree in business.

She often referred to herself as a "southern belle" and loved the finer things in life.

But more importantly, she was a devout Christian who lived by the word of the Bible. She loved her family.

She took pride in mentoring young people; keeping them on the straight and narrow and picking them up when they fell in life. So many of her students came back to her over the years to thank her for being there for them and credit her with their success.

She is preceded in death by her parents, siblings and former husband, Leonard Ballou, Sr.

The funeral service will be held at 11:00 a.m. Wednesday, September 4, 2019 at Wells Memorial United Methodist Church with burial following in Jessamine Cemetery. A visitation will be held from 6 p.m. to 8 p.m. Tuesday at Sebrell Funeral Home in Ridgeland and will resume at 10:00 a.m. Wednesday at the church.

Published by Clarion Ledger on Sep. 2, 2019.
To plant trees in memory, please visit the Sympathy Store.
MEMORIAL EVENTS
Sep
3
Visitation
6:00p.m. - 8:00p.m.
Sebrell Funeral Home
425 Northpark Drive, Ridgeland, MS
Sep
4
Funeral service
11:00a.m.
Wells Memorial United Methodist Church
MS
Funeral services provided by:
Sebrell Funeral Home
MAKE A DONATION
MEMORIES & CONDOLENCES
Sponsored by Sebrell Funeral Home.
3 Entries
My prayers are with you.
We worked together in the Gethsemane Enrichment After School Program . She was a loving and hardworking person. I missed her when she left Charlotte.
Linda Sagoe
October 27, 2019
My belated condolences to Howard and all the rest of Mrs Ballou's family. I had the considerable privilege of having her as my good friend and neighbor. She made a big contribution to the quality of life for us all. Rest in Peace, Mrs Ballou.
Owen Butler
September 5, 2019
Thank you so much for being that pathway for so many of us!! Sweet Rest unto you!!
Ethel and Rev. Freddie L. Carson
September 2, 2019
Showing 1 - 3 of 3 results