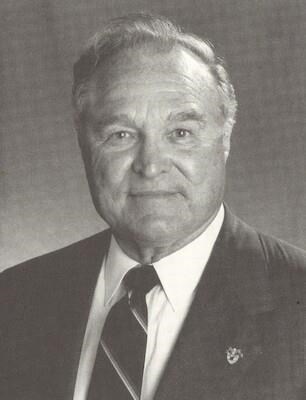 Jackson - Pre-written by the deceased:

William D. Mounger passed away on Friday, June 26, 2020 in Jackson, MS after a short illness. He was a native Jacksonian who was well known to many people.

He was born on March 31, 1926 to Veronica Robertson Mounger and William Malcolm Mounger, both deceased. His father was a long time CEO of Deposit Guaranty Bank and Trust Company which he built from a very small bank into the largest and most successful in Mississippi.

In 1944, he was appointed to the United States Military Academy, West Point, New York, intending to play football for the Army Team. Army was number one in the country for three years and he could not make that team: consequently, he concentrated on the difficult academic work and rigorous schedule and graduated from West Point in the Class of 1948 with a B.S. Degree in General Engineering.

He was commissioned 2nd Lt. in the U.S. Air Force, took Basic Pilot Training at Randolph Field, Texas, and received his pilot's wings in September of 1949 at Barksdale Field in Shreveport, Louisiana. He flew B-29's, but mostly B-50's, and participated in flying the first Atomic Bombs to Europe in 1950. He attained the rank of 1st Lt. and was Aircraft Commander of a B-50 Bomber with a ten man crew and was also an atom bomb commander. He resigned from the Air Force in February of 1953.

In March of 1957, he began working for Humble Oil and Refining Company (Exxon) in south Louisiana as a petroleum engineer. While there, he attended their Reservoir Engineering School and worked on several projects for the company. In July of 1958, he left Humble to open the first Petroleum Department in Mississippi for the Deposit Guaranty Bank & Trust Company which he managed until January of 1970. From then on, he was an Independent Oil Producer, and as an investor, participated in many business endeavors.

He was well known also for other activities, especially the USA International Ballet Competition. In 1986 when it was about to founder due to financial problems, Mayor Dale Danks asked him to save the competition. With only six weeks left before the competition, he raised $350,000, enabling it to be produced with Russia participating in the West for the first time, sending their three best dancers to perform thereby cementing the status of the USA IBC as the best in the world. For the 1990 USA IBC, he was development chairman putting the IBC in the best financial position of any arts organization in Mississippi. He then served as chairman of the 1994, 1998, 2002, 2006, and 2010 competitions assuring continued preeminence of the USA IBC as number one in the world; and in 2011 he was designated Chairman Emeritus of the USA IBC.

He served as a member of the Board and Honorary Chairman of the Mississippi Commission for International Cultural Exchange from its origination in 1994. This commission produced The Palaces of St. Petersburg (drawing 554,000 people) in 1996; The Splendors of Versailles in 1998 (drawing 275,000 people); in 2001 The Majesty of Spain (drawing 318,000 people) which was the largest number of objects ever displayed from the Patrimonio National and the Prado Museum and brought to Mississippi the Duke of San Carlos and Her Majesties the King and Queen of Spain; and in 2004, The Glory of Baroque Dresden which drew 133,000 viewers.

He worked very hard on behalf of the United States Military Academy by serving on its Board of Visitors (appointed by President Reagan) for two terms from 1984-1989 and served as Chairman of that Board in 1988 and 1989. He was chairman of the West Point Society of Mississippi from 1990 to 1995 and was elected as a trustee of the Association of Graduates from 1994-2001, and was elected as a Trustee Emeritus from that time on. He served as an Honorary Chairman of the West Point 350 million dollar "For Us All" campaign. Among other things, he sponsored the Blaik (the famous football coach) Room in West Point's new Kimsey Athletic Center and the Mounger Writing Center in Jefferson Hall, the new library. He was also a member of the Cullum Society and the Douglas MacArthur Society.

He was an avid tennis player and was a Vice President of the Southern Lawn Tennis Association and ranked several categories of junior players over the years. He ran many Junior Tennis tournaments including the only two National Championship Tennis tournaments of any kind ever held in Mississippi - the 1975 Boys Sixteen Clay Court Championship (won by John McEnroe) and the same championship tournament for 1976. Interestingly, he had previously been an excellent golfer reaching the semi-finals of the Jackson Country Club championship in 1960. Also he solved the Rubik's Cube without cheating and was Gin Rummy champion of the Petroleum Club, 1966.

He was very active in the oil and gas industry activities serving on The Mid Continent Oil & Gas Association's National Executive Committee from 1970 to date and as President of its Miss-Ala Division in 1968-69. For the Independent Petroleum Association of America, he served as vice president, executive committee member, nominating committee member, as national membership chairman and chairman of the finance committee. And, he also served on the national Petroleum Council in Washington, D.C. 1990-1994; President of the Petroleum Club 1966-1967.

Among other attainments are: Appointment by President Nixon to the 15 member National Review Board for the East-West Center in Hawaii 1969-1976; Vice President of the Board of Trustees of Jackson Academy 1966-1976; Finance Chairman of the Mississippi Art Association 1977-1978; Board of Directors of Deposit Guaranty National Bank 1964-1993; serving on all of its committees; Executive Committee of Delta Industries 1958 to date; Board of Directors of the Rankin County Bank 1970-1986; Board of Trustees Jackson Symphony; Board of Big Brothers-Big Sisters for Mississippi 2000-2001; Commissioning Committee for USS John C. Stennis 1995; Board of Directors of the Armed Forces Museum Camp Shelby, MS 2004 to date; Presidential (Bush II) appointment to the President's Advisory Committee on the Arts 2004 to 2009; Board of Directors Friends of Mississippi Veterans (Mississippi Veterans Memorial Cemetery) 2009 to date. Additionally, along with Joe Maxwell he authored his memoir Amidst the Fray, plus he wrote The Unforgettable Jim Furrh in 2012.

He received many awards including: The Bill and Emmett Vaughey Wildcat Award (Mid-Continent Oil & Gas Association) 1994; Governor's Award for Excellence in Arts-Patrons Award 1995; Recipient of People of Vision Award 1995; Recipient of the Exchange Club Americanism Award 1996; Knighted by Knights Hospitaller of Saint John of Jerusalem 1997; Goodwill Volunteer Service Award for 2001; Roasted by all major elected officials of the Mississippi Republican Party and was the first recipient of the Stuart C. Irby Philanthropy Award 2005; honored by the American Cancer Society 2007; Deputy Sheriff Hinds County 2004-2011, Deputy Sheriff Rankin County 1980-1988; received the Boy Scouts' Distinguished Citizen's Award 2007; honored by the Fondren Renaissance Foundation for Arts contribution 2012, plus by the Symphony on the Green 2018, and honored by a Tribute Dinner and a Gold Medal from the USA IBC 2012, and formation of the William D. Mounger Foundation 2018: recipient of the Mississippi Distinguished Civilian award 2014. He was a long time active member of the First Presbyterian Church in Jackson.

A Memorial Service will be held on Wednesday, July 1st at First Presbyterian Church in Jackson beginning at 12:00pm. The family and church ask that all social distancing guidelines be followed and all who attend wear a mask. For the convenience of those who are unable to attend the service will be live streamed at fpcjackson.org/livestream. A private family graveside will be held at Lakewood Memorial Park.


Published by Clarion Ledger from Jun. 27 to Jul. 1, 2020.
To plant trees in memory, please visit the Sympathy Store.
MEMORIAL EVENTS
Jul
1
Memorial service
12:00p.m.
First Presbyterian Church
Jackson, MS
MAKE A DONATION
MEMORIES & CONDOLENCES
Sponsored by the Clarion Ledger.
6 Entries
I was the USA IBC Box Office Manager in 1994 and worked with Billy. I had a lot of respect for him. And he did for me as well . God bless you dear friend and art patron. You made so many significant marks in this world and lived a rich and full life. My condolences for the family.
Mrs. Pam Bass Finnegan
Pamela Finnegan
Coworker
January 31, 2021
Words may not suffice to express the heartfelt sorrow that I feel for the passing of cousin Billy. Please accept my sincere condolences.
Thomas Robertson
Family
June 30, 2020
In the 60 years that I was privileged to know him, Billy Mounger provided sound, supporting advice and financial support for projects far beyond the major ones for which he is widely known. I honor his lifelong, successful efforts to make the world better than he found it.
John Vaughey,
Denver
John Vaughey
Friend
June 30, 2020
Honor and appreciation to Billy Mounger for the long-term good for so many. Prayers for this worthy person before God.
Victor LaGarde
Acquaintance
June 29, 2020
Billy Mounger was a man of wit and integrity. He exemplified how one man can make a real impact. He will be missed.
Bill Philipp
Friend
June 28, 2020
Billy Mounger did so much for our State, region, and country. He will be greatly missed.
Bud Robinson
Friend
June 28, 2020
Showing 1 - 6 of 6 results