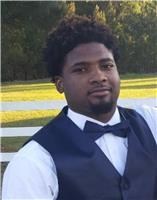 He was born on March 27, 1997 in Fayetteville, NC. Being a military child Keifh attended various schools and got the chance to travel the world often over his father's Military career. After a PCS move from Heidelberg, Germany to his current home in Hinesville, GA, Keifh attended Bradwell Institute (B.I. You Know!!) where his love for football and sports continued to grow. Keifh was just an overall athlete. He played football all three years of his attendance at Bradwell, ran track and played basketball for the local Recreational Department. Keifh graduated from Bradwell in May of 2016.

De'Keifh is survived by his two children Josiah Isaiah Thomas-Hudson age 2 and Sayde Marie Thomas 7mos, both of Hinesville, GA. His parents Kim Thomas-Hudson of NC and Donald Thomas of NY. Siblings Da'Les Thomas of NC, Sincere and Dasir Thomas (twins) both of NC and Prynce Eric Troup of GA. Both maternal and paternal Grandparents and his maternal Great Grandmother. A host of aunts, uncles alongside his cousins and his only nephew. De'Keifh also had a special friend the mother of his two children Megan Reiley of CO.

There will be a Remembrance Ceremony for De'Keifhs' friends to be announced at a later time.

Funeral services for De'Keifh are Saturday, May 8, 2021 at the Allenhurst Church Of Christ, 4667 W Oglethorpe Hwy, Allenhurst, GA 31313 at 11am for family and close friends of De'Keifh.

Dorchester Funeral Home will be handling the arrangements.
To plant trees in memory, please visit our Sympathy Store.
Published by Coastal Courier from May 4 to May 11, 2021.
MEMORIAL EVENTS
May
7
Viewing
1:00p.m. - 5:00p.m.
Dorchester Funeral Home
7842 E Oglethorpe Highway, Midway, GA
May
8
Funeral service
11:00a.m.
Allenhurst Church Of Christ
4667 W Oglethorpe Hwy, Allenhurst, GA
Funeral services provided by:
Dorchester Funeral Home
MEMORIES & CONDOLENCES
5 Entries
My condolence to the entire Thomas-Hudson family during this time. My thoughts and prayers are with you all. The Hamilton Family
Kenesha Hamilton
Acquaintance
May 6, 2021
Kim, I am so very sorry to hear this! Please know that you and your family are in my prayers.
Wanda J Williams
Friend
May 6, 2021
May the love of friends and family carry you through your grief. My prays are with you.
Daphine Nichols
Friend
May 6, 2021
Keifh was my First Born...my heart and soul...
Kim L hudson
Mother
May 5, 2021
My sincere condolences to you and your family at this time. Sending love and prayers to you all!!
Atrellia Quarterman
Friend
May 4, 2021
Showing 1 - 5 of 5 results