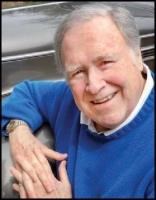 Joe Sherlock, entrepreneur, engineer, “car guy” extraordinaire and O-gauge rail enthusiast, died on Dec. 29, 2021, of complications following a heart attack. He was 78 years old.
Joseph Michael Sherlock, Jr. was born Aug. 5, 1943, in Philadelphia, PA, to Joseph and Anne (McNicholas) Sherlock. He graduated from St. Joseph’s Prep School, Phila, PA, in 1961, and from Villanova University in 1965 with a BS in mechanical engineering. After graduation, Joe worked as a development engineer at Uniroyal and then Rohm & Haas, first in the engineering lab and later in sales and marketing.
In 1966, Joe married the love of his life Carol Jean Howell. They welcomed a son Joseph III in 1967 and a daughter Kathleen in 1970.
In 1978, Joe and his family moved across country to Corvallis, OR, to pursue his dream of owning a business. Together with a business partner, Discovery Plastics grew from one employee to a worldwide distributer of acrylic displays and store fixtures with 70+ employees.
In 1989, Joe and Carol moved to Battle Ground, WA, and he began a new career as a management consultant to small and mid-sized companies. For 8 years, he wrote a popular “Doin’ Business” newspaper column for The Columbian, and authored 7 books. Joe volunteered with SCORE (Service Corps of Retired Executives) for 25+ yrs. He retired from “Sherlock Strategies” in 2011.
A self-described car nut, Joe had a passion for old cars, especially classic Lincolns. He owned a 1956 and ’57 Continental Mark II, the ’57 winning a Ford Motor Co. trophy at the 1994 Western National Meet. He served as Director of LCOC (Lincoln Continental Owner’s Club) and wrote and edited the chapter’s newsletter from 1992-2003. A talented illustrator, he drew many auto sketches and wrote extensively about cars on his blog (“The View Through The Windshield,” at www.joesherlock.com) and reviewed books about cars. His 1939 Plymouth Coupe street rod became his therapy car during two bouts with cancer.
Joe is survived by Carol, his wife of 55 years; their son, Joseph III (Evette) and grandson, Connor; their daughter, Kathleen Sherlock Bowers (David); and brother, Terence (Margie). In addition to his immediate family, he also leaves many cousins, friends and neighbors.
Despite many medical problems in his later years, Joe always lived life to the absolute fullest; his humor, determination and intellect were truly unmatched.
A Funeral Mass will be held at St. James Cathedral 218 W. 12th St. Vancouver Sat., Jan. 15, at 11:45 a.m.
In lieu of flowers, donations can be made to the Ray Hickey Hospice House or a charity of your choice.
Please share a memory @ www.columbian.com/obits

Published by The Columbian on Jan. 9, 2022.
To plant trees in memory, please visit the Sympathy Store.
MEMORIAL EVENTS
Jan
15
Funeral Mass
11:45a.m.
St. James Cathedral
218 W. 12th St., Vancouver, WA
MAKE A DONATION
Please consider a donation as requested by the family.
MEMORIES & CONDOLENCES
6 Entries
I followed Joe's blog and I will miss his insights and wit. While I never met him nor corresponded with him, he enriched my life. I will miss him as I would miss an old friend. I pray his family will be comforted in their time of loss and find some peace in the knowledge that Joe left friends he never met who are also mourning his loss.
Rob Merryman
Other
January 18, 2022
Followed Joe's blog for a number of years and always enjoyed his insights and occasional rants. I will miss his postings very much.
Pete Skimmel
Other
January 16, 2022
I never met Joe in person, but we exchanged emails here and there and had a lot in common. I work in the auto industry and could always count on Joe's blog to bring a fresh perspective on automotive topics, current events and daily life. My condolences to the Sherlock family. May you be comforted in this difficult time by the peace of our Lord. Joe will surely be missed by his many fans who, like me, never met him but considered him a friend.
Charlie Barnes
January 11, 2022
I had the pleasure and satisfaction of finding Joe's blog quite a few years ago, as early as 2009 from what I see in my archives. I've had an admiration for Joe, and the great content he added to his site ever since. I hope you know you have my sincere sympathy. I looked forward to seeing his blog every couple days so I could read along through lunch to learn from his wide coverage of news, and entertainment.
Justacarguyblog Jesse
Work
January 10, 2022
Joe, never met you but followed your blog for many years. Always enjoyed what and how you wrote. I´ll remember you and miss you. I offer my most sincere condolences to Carol and your family.
Dave Christof
January 10, 2022
I never met Joe, but followed his blog and exchanged a few emails. I'm sure going to miss his facts interlaced with his humor. Also his stories of growing up and St. Joes Prep. Rest In Peace
Mark Holbrook
Other
January 9, 2022
Showing 1 - 6 of 6 results