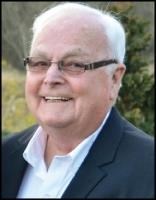 Richard (Dick) Frederick Osterberg, age 83, passed away due to diabetes complications. Dick was born in Barre, VT, to Frederick and Linnea (Bowman) Osterberg. He is survived by his husband Kevin Kaskie, and their two Scottish Terriers, Aden and Duff. His sister, June Elaine, did not survive infancy.
After graduating from Spaulding High School, he headed to Fresno, CA, and attended what is now Fresno City College, later transferring to Fresno State. He received his teaching credential and began teaching in Hanford, CA. He began work on a masters degree at Fresno State and then moved to Fresno Unified School District. Dick taught 10 years at the elementary/junior high level. He joined the education department at California State University, Fresno and remained there for 34 years. He graduated from the University of Southern California with a doctorate in Curriculum and Higher Education, 1977.
Dick will be remembered for his expertise in American Sterling Silver. He authored six books on the subject, and numerous articles. One book is in its 3rd edition. Dick at one time ran a sterling silver matching service, and appeared in many antique shows throughout California.
Dick is also known as a wonderful cook, and table setting expert. He frequently entertained for his many friends, and continued to provide a place for holidays for many of them. His interest in silver was also shown in his table settings with China, Linen, and Glass. He was always trying new recipes and shared them with his many friends. During the summer his garden provided ample fruits and vegetables and always enjoyed canning many of them. Through the years he belonged to many gourmet groups in California, Oregon and Washington.
A chance trip to the Northwest in 2005, resulted in selling his home in Fresno and moving to SW Washington which is where he met his husband.
His inurnment will take place at the Chapel of the light in Fresno, which is where he will join his parents.
A celebration of life will take place in Ridgefield, WA, at a later date.
Please share a memory @ www.columbian.com/obits

Published by The Columbian on Nov. 21, 2021.
To plant trees in memory, please visit the Sympathy Store.
MEMORIAL EVENTS
To offer your sympathy during this difficult time, you can now have memorial trees planted in a National Forest in memory of your loved one.
MAKE A DONATION
MEMORIES & CONDOLENCES
2 Entries
Well, Dick and I go a long way back, maybe 1943. We grew up just a couple hundred yards from each other and went to the same schools through high school. We gathered milkweed pods during WWII for life jackets for the military, we both gardened as children having Victory Gardens in our back yards. We shared our first fight walking home from the third or fourth grade one day, over what I cannot remember, but we just continued the walk home when we finished our"combat". We stayed in touch occasionally after Dick left VT for CA, exchanging an occasional recipe and I always looked forward to seeing Dick at our SHS class reunions until the travel became too difficult for him. I will miss Dick who was truly a "lifelong friend" of over 75 years.
Bob McAllister
Friend
November 27, 2021
I have many memories of Dick. Always had a big smile, was an amazing cook and host to all. He will be missed by so many of us that were blessed to have him in our life. Kevin we send our love to you and know you were by his side every minute taking such good care of him everyday. We all love you
Joan Archie
Family
November 22, 2021
Showing 1 - 2 of 2 results