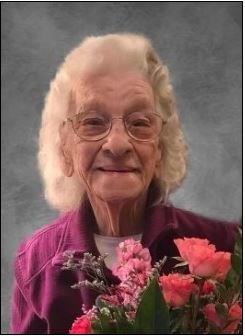 Adeline was born on Sept. 7, 1920 to Alex and Anna Marie (Walker) Stamm in Wayne County, Nebraska.

She married Malcolm "Smokey" Thompson, Sr. on Jan. 7, 1941, in Sioux City, Iowa. Adeline was a homemaker and caring mother to their five children. The last 3 ½ years she lived at Marquis Place in Omaha, Nebraska.

Her many hobbies included knitting, quilting, sewing, gardening, baking and taking care of her flowers. She was a member of St. John's Lutheran Church.

In lieu of flowers memorials to the family for future designation.

To plant trees in memory, please visit our Sympathy Store.
Published by The Columbus Telegram from Jun. 10 to Jun. 17, 2021.
MEMORIAL EVENTS
No memorial events are currently scheduled.
To offer your sympathy during this difficult time, you can now have memorial trees planted in a National Forest in memory of your loved one.
Funeral services provided by:
Kracl Funeral Chapel
MAKE A DONATION
MEMORIES & CONDOLENCES
Sponsored by Kracl Funeral Chapel Schuyler.
0 Entries
Be the first to post a memory or condolences.