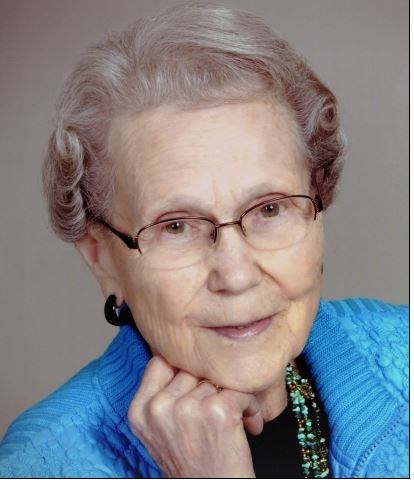 Mass of Christian Burial will be held at 10:30 a.m. on Friday, Oct. 1, 2021, at St. Bonaventure Church in Columbus. There will be a C.D.A. rosary at 4 p.m. on Thursday, Sept. 30, 2021, at McKown Funeral Home. Visitation will follow from 5 p.m. – 7 p.m. with a 7 p.m. vigil service also at the funeral home. Visitation will continue from 9:30 a.m. - 10:30 a.m. on Friday Oct. 1, at the church. Following the Services her body will be donated to Creighton University Medical School. Her cremains will be returned later to Columbus for private family burial.

The Mass will be broadcast on the McKown Funeral Home Facebook Page.

She graduated from St. Bonaventure High School in 1947, earned a B.A. from Wayne State College in 1950, and an M.S. from UNO in 1960. She commuted to high schools in Platte County to teach and worked at Becton, Dickinson and Company for 5 years. In 1965, she started the Guidance Dept. at Columbus Junior High, and then transferred to Columbus High as Guidance Counselor. She retired from Columbus Schools after 21 years of service.

Cathy was a member of St. Bonaventure Church and served as a Lector. She belonged to The Catholic Daughters, Servants of the Heart of the Father, and several teacher organizations. She was a lifeguard, swimming instructor and lap swimmer for many years.

She was preceded in death by her husband, Edsel Wibbels in 2010; her brother, Raymond Hauser; and her parents.

Family requests no flowers. Memorials may be made to St. Bonaventure Church, Scotus Central Catholic, or Servants of the Heart of the Father, P.O. Box 218, Platte Center, NE 68653-0218.

Condolences may be left at www.mckownfuneralhome.com

Published by The Columbus Telegram from Sep. 22 to Sep. 28, 2021.
To plant trees in memory, please visit the Sympathy Store.
MEMORIAL EVENTS
To offer your sympathy during this difficult time, you can now have memorial trees planted in a National Forest in memory of your loved one.
Funeral services provided by:
McKown Funeral Home Inc
MAKE A DONATION
MEMORIES & CONDOLENCES
Sponsored by McKown Funeral Home Inc.
0 Entries
Be the first to post a memory or condolences.