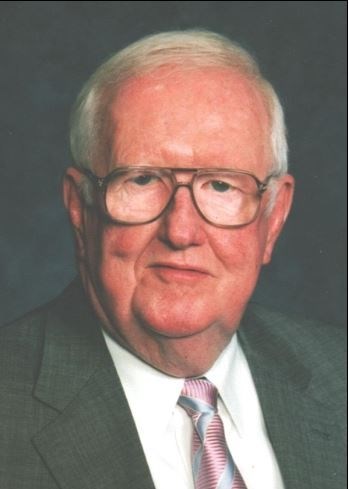 Daniel H. Riley was born July 27, 1937 in Fairbury, Nebraska to H.B. and Maree (McGerr) Riley. He graduated from Fairbury High School. Dan went on to St. Benedict's in Atchison, Kansas and received a Bachelor of Arts and Science Degree. Dan met Sandra Ayers Ellico in Kansas City and were married on Sept. 11,1965. They made their first home in Fairbury, where Dan worked as a salesman at Riley Motors. In 1967 the family moved to Columbus to be a partner and then sole owner of Rogers-Riley. In semi-retirement, Dan continued as a consultant for Cosgriff fundraising for many community improvements around the midwest.

Dan was a dedicated father and community member. He took an active role in the Catholic community, especially St. Isidore Parish in the building of the church. He served as president of the Chamber of Commerce and was a member of the Elks Club.

Dan enjoyed times with friends and family, playing golf, hosting dinners and closing a deal or two. His dedicated support to his family will be greatly missed as he moves on to his reward.

Dan was a beloved father and grandfather who will be deeply missed.

He is survived by his wife, Sandra Riley of Columbus, Nebraska; daughters, Maria Thomas of Kansas City, Missouri, and

Angie Riley and Chris True of Minneapolis, Minnesota; sons, Hugh B. Riley of York, Nebraska, and John Riley of Seattle;

He was preceded in death by his parents, H.B. and Maree Riley; brother, William H. Riley; and sister, Kay Gatz.

Condolences may be left at www.mckownfuneralhome.com.

To plant trees in memory, please visit our Sympathy Store.
Published by The Columbus Telegram from May 13 to May 14, 2021.
MEMORIAL EVENTS
May
16
Visitation
4:00p.m. - 6:00p.m.
May
16
Vigil
6:00p.m.
St. Isidore's Catholic Church
, Columbus, Nebraska
May
17
Visitation
9:30a.m. - 10:30a.m.
St. Isidore's Catholic Church
, Columbus, Nebraska
May
17
Mass of Christian Burial
10:30a.m.
St. Isidore's Catholic Church
, Columbus, Nebraska
Funeral services provided by:
McKown Funeral Home Inc
MAKE A DONATION
MEMORIES & CONDOLENCES
Sponsored by McKown Funeral Home Inc.
2 Entries
So sorry for your loss. Marilyn
Marilyn Murray
May 14, 2021
My deepest Sympathy Sandy. So sorry to hear of this. You and Dan were a big part in our lives at one time. Denny and Dan always had something to share and shoot the breeze. Prayers for your family.
Dorothy Tallon
May 14, 2021