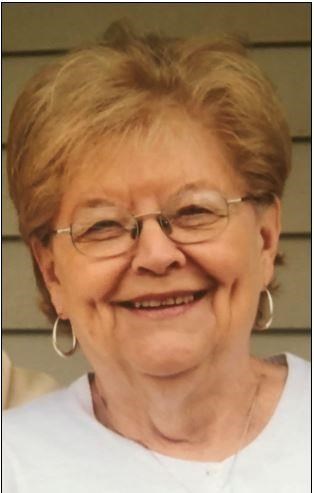 Lunch was held immediately following mass at the auditorium.

Patricia A. Montag was born March 5, 1939 on a farm near Breda, Iowa to Clarence and Evelyn (Booth) Karstens. She attended high school in Wall Lake, Iowa and later attended Ft. Dodge Business School in Iowa for 1 year. On May 27, 1961, she was united in marriage to David Montag in Sac City, Iowa. They lived in Dix, Nebraska and Patricia worked at First National Bank in Kimball. They have lived in David City since 1972. She worked as a bookkeeper for Kobza Motors, Oak Creek Foods and Neil Kuhlman in David City. Pat was a friend to whoever she met and loved a good conversation. She was an avid card player but a bit of a card snob as she would only play bridge. She liked a good cup of coffee especially with a dash of kahlua. Pat was a loyal fan of Husker volleyball and football. Some would say she had a bit of an obsession with a clean house. But, upmost, Pat loved her grandkids and passionately enjoyed watching their events.

Kracl Funeral Home is in charge of arrangements.

To plant trees in memory, please visit our Sympathy Store.
Published by The Columbus Telegram on Jul. 22, 2021.
MEMORIAL EVENTS
No memorial events are currently scheduled.
To offer your sympathy during this difficult time, you can now have memorial trees planted in a National Forest in memory of your loved one.
Funeral services provided by:
Kracl Funeral Chapel
MAKE A DONATION
MEMORIES & CONDOLENCES
Sponsored by Kracl Funeral Chapel Schuyler.
0 Entries
Be the first to post a memory or condolences.