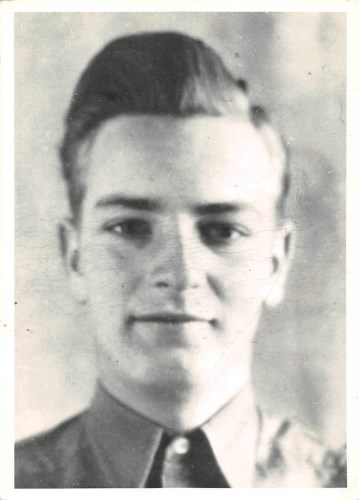 PFC John Paul "Jack" Langan, died Nov. 22, 1943, on the Island of Betio fighting for his country in World War II. John's remains have been recovered.

The family will receive friends from 10 a.m. – 12 p.m. on Wednesday, Sept. 29, 2021, at the McKown Funeral Home. At 12 p.m., we will begin the procession to SS. Patrick/Joseph Cemetery in rural Platte Center. The procession will leave McKown Funeral Home traveling east on 15th street to 18th avenue. We will go north on 18th avenue to Lakeview Road going west to the cemetery.

John Paul "Jack" Langan was born Jan. 30, 1925, the sixth of eight children to Edward and Mary Langan in Platte Center, Nebraska. Jack's mother died in 1936 when Jack was just 10. Within two years, Edward Langan moved to Idaho, leaving his children behind. The three oldest, Martha, Arnold, and Harvey, who were 19, 18, and 16 years old when their mother died, kept the family together as best they could.

When Arnold married his wife, Stella, in 1939, they took Jack and his two youngest brothers, Kenny and Don, into their home. Harvey and another older brother, Alvin, headed west to find work and later, during WWII, joined the Navy. Arnold also joined the Navy in 1943. Another sister, Dolores, who was 15 when her mother died, had become a beautician in Columbus, Nebraska, to help support the family. Martha had married and was raising her own family when she died in 1940 from a tragic fire.

Jack's younger brothers also joined the armed sendees after WWII. Kenny served in the Army and Don in the Air Force. All six Langan brothers served their country.

Jack grew into a solid athlete while attending St. Joseph's High School. After the U.S. entered World War II, the military gave him an opportunity to support himself. He enlisted in the Marine Corps on Nov. 26, 1942; two months shy of his 18th birthday. After training at Camp Pendleton, CA, Jack was assigned to the 1st Battalion, 6di Marine Regiment.

On Nov. 21, 1943,-the unit took part in an amphibious assault on the small - barely 2 miles long and 800 yards wide - island of Betio in the Tarawa atoll, about 2,500 miles southwest of Hawaii. The Japanese had built an airstrip there, and the Marines needed it.

The U.S. landed 18,000 Marines against fewer than 5,000 defenders. Jack's unit embarked on the west end of the island and fought their way east. They met fierce resistance from the Japanese, who faced annihilation. Only 146, mostly conscripted Korean laborers, were eventually taken alive.

About noon on Nov. 22, Jack volunteered to take water to some Marines who were pinned down. As he stood up, he was hit in the head by Japanese machine-gun fire, according to a letter the family received from one of his Marine Corps buddies. He died immediately and "did not suffer one bit," the Marine wrote.

Jack's body was hastily buried by his fellow Marines. Like half of the 1,069 Americans who perished during close quarters fighting Nov. 20-23, 1943, his remains were never identified. Though records indicated he had been buried in Row D of Cemetery 33 on Betio, that row was never found. On Oct. 7, 1949, a military review board declared his remains to be "non-recoverable."

History Flight surveyors finally found the Row D remains in 2019, and the DPAA recovered them. Twenty- two caskets arrived at the agency's Hawaii laboratory in July 2019. PFC Jack Langan's identification is one of 18 of the Row D group announced so far.

Published by The Columbus Telegram on Sep. 25, 2021.
To plant trees in memory, please visit the Sympathy Store.
MEMORIAL EVENTS
Sep
29
Visitation
10:00a.m. - 12:00p.m.
McKown Funeral Home Inc
2922 13Th St, Columbus, NE
Sep
29
Service
12:00p.m.
SS. Patrick/Joseph Cemetery in rural Platte Center
NE
Funeral services provided by:
McKown Funeral Home Inc
MAKE A DONATION
MEMORIES & CONDOLENCES
Sponsored by McKown Funeral Home Inc.
1 Entry
My condolences to the family of Pfc. Langan I just read the article in today´s Omaha World Herald about the long journey of Pfc. Langan. I do thank him for his service. And I am grateful that your family may celebrate his return home to Nebraska. My deepest sympathies. Bonnie Bloch
Bonnie Bloch
Other
September 29, 2021
Showing 1 - 1 of 1 results