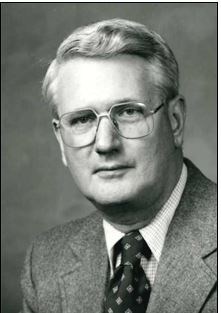 Mass of Christian Burial will be at 10:30 a.m. on Friday, April 30, 2021, at St. Bonaventure Catholic Church, with Fr. Mike Swanton celebrating the Mass. Interment will be in St. Bonaventure Catholic Cemetery. Visitation will be from 5 p.m.-7 p.m. on Thursday, with a 7 p.m. vigil service, both at the church. Visitation will continue on Friday from 9:30 a.m. until service time, also at the church. The funeral service will be broadcast live on Gass Haney Funeral Home Facebook page.

Robert L. Gangel was born Dec. 31, 1931, in Nebraska City, Nebraska, to Joseph and Jane (Wilson) Gangel. He graduated in 1953 from the University of Nebraska – Lincoln, where he was a member of Beta Theta Pi fraternity and ROTC, with a Bachelor of Science Degree in Business Administration. Following graduation, Bob served in the United States Air Force as a communication officer in Tokyo, Japan.

Bob was united in marriage to Marilyn Coupe on Dec. 10, 1955, in Nebraska City. They moved to Columbus in 1956 where Bob was employed at Becton-Dickinson. In 1960, they moved to Broken Bow, Nebraska, where Bob was the first manager of the new B-D operation. In 1965, they returned to Columbus, where he became plant manager. After leaving B-D employment, he pursued various business opportunities with First National Bank, Equitable Savings & Loan and Nebraska Public Power District. At NPPD, he served as vice president of administration, chief financial officer, and acting CEO before his retirement in 1996.

During his business years, Bob always found time to serve the community in various ways. He was on the St. Mary's Hospital Board when the merger of hospitals occurred. Bob later served on the Columbus Community Hospital Board and chaired a fund drive. He also served as a director of the Columbus Chamber of Commerce; United Way Board; Columbus Library Foundation; and the University of Nebraska Advisory Council to the college president. Bob was also on the Tasty Toppings, Inc. Board of Directors; president of Rotary and a Paul Harris Fellow; and a member of the Columbus Planning Commission.

Other business associations include serving as president of the Nebraska League of Savings & Loans; Columbus Industrial Team; board member of the Nebraska Investment Finance Authority; board member of General Telephone Company of the Midwest; and director of Nebraska Association of Commerce and Industry. During Columbus Days in 1986, Bob was named King Ferdinand in recognition of his years of community service.

As a member of the Elks County Club, Bob enjoyed golfing for many years at the Club. A long time parishioner of St. Bonaventure Catholic Church, Bob was a member of the Perpetual Adoration Society and the Knights of Columbus.

Bob has been a Husker fan and a season ticket holder for over 50 years. He and Marilyn enjoyed Husker alumni trips to football games in other states. They enjoyed five European trips and traveled to Scottsdale, Arizona, in the winter.

Bob was preceded in death by his parents, Joseph and Jane Gangel; wife, Marilyn Gangel; and brother, William "Bill" Gangel.