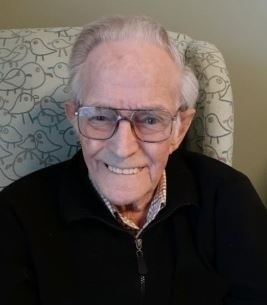 The funeral service will be held at 10:30 a.m. on Monday, Sept. 13, 2021, at Immanuel Lutheran Church, Columbus, with Rev. Patrick Sparling and Rev. Chris Ramstad officiating. Visitation will be from 2 p.m. – 4 p.m. on Sunday, Sept. 12, 2021, at Gass Haney Funeral Home. Visitation will continue from 9:30 a.m. until service time on Monday, Sept. 13, at the church, with a family prayer service at 10:15 a.m., at the church. Interment will be at the Gruetli cemetery (south of Monroe), with military honors. The funeral service will be broadcast live on Gass Haney Funeral Home Facebook page.

Robert Ruel Knowlton was born July 18, 1933, in Medford, Oregon, the oldest of two children to Ruel and Anna (Bonin) Knowlton. He was baptized and confirmed in the Lutheran faith. Bob attended Davenport Public Schools through graduation in 1952.

On June 12, 1955, Bob was united in marriage to Fern Reese in Edgar. They were blessed with five children, Rebecca, David, Lori, Jeff, and Jory. They spent 29 years together raising their family in Monroe. Fern passed away on July 8, 1984. On November 26, 1988, Bob married Sylvia (Clupny) Houske in Columbus.

Bob enjoyed many things in his life. He enjoyed attending church, gardening, watching Husker sports, and making others smile. Bob was strongly rooted in his faith and shared this with his family and others. But what he enjoyed most was his family. He always had a smile on his face when they were around. He was the rock and foundation of this family, teaching his faith and dedication to those he loved.

Bob was enlisted in the U.S. Army from 1953 -1955 where he was stationed in both Fort Knox, Kentucky and Fort Hood, Texas. His dedicated service earned the Korea Service Ribbon. He was also a member of Immanuel Lutheran Church since 1957. While living in Monroe, Bob was a volunteer for the Monroe Fire Department for 19 years.

Bob was a dedicated truck driver for Gerhold Concrete for over 50 years. He drove a ready-mix truck, a block truck, but was most proud of driving a 22 wheeler.

He will be missed forever.

Memorials may be directed to the family's choice.