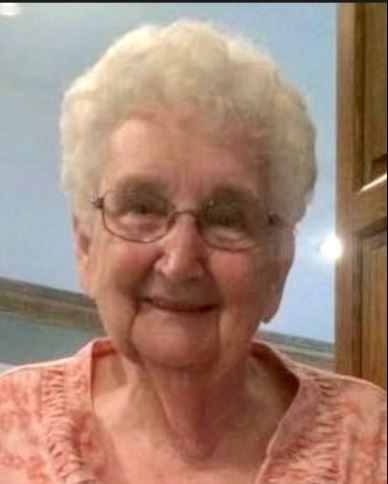 Virginia Marie Kudron was born Aug. 30,1931 in Columbus, Nebraska to Charles and Antonia (Murray) Kuta. On July 26,1950 she was united in marriage to Jerome J. Kudron at St. Bonaventure Catholic Church in Columbus, Nebraska. Virginia worked at Becton,Dickinson and Company for over 30 years until retiring. She was a member of St. Anthony Church, St. Theresa Sodality, Navy Mothers and the V.F.W. Auxiliary.

Virginia Marie instilled the importance of faith, love and the value of a good sense of humor to all her family. She embodied her Savior's call to love without limit and give generously expecting nothing in return. Patience and compassion were virtues she gave in abundance and will be a cornerstone her friends and family will lean on when remembering her. Her witty comebacks and lively personality always kept her loved ones on their toes. The world will be amiss without her gentle smile and rhubarb cake. Until the Lord calls us home or He returns, those who knew her anxiously await to see that smile again.

Condolences may be left at www.mckownfuneralhome.com.

To plant trees in memory, please visit our Sympathy Store.
Published by The Columbus Telegram on Jul. 21, 2021.
MEMORIAL EVENTS
Jul
22
Visitation
4:00p.m. - 7:00p.m.
McKown Funeral Home - Columbus
2922 13th Street, Columbus, NE
Jul
22
Vigil
7:00p.m.
McKown Funeral Home Inc
2922 13Th St, Columbus, NE
Jul
23
Visitation
9:30a.m. - 10:30a.m.
St. Anthony Catholic Church
, Columbus, NE
Jul
23
Mass of Christian Burial
10:30a.m.
St. Anthony Catholic Church
, Columbus, NE
Funeral services provided by:
McKown Funeral Home Inc
MAKE A DONATION
MEMORIES & CONDOLENCES
Sponsored by McKown Funeral Home Inc.
3 Entries
To Paula & family, I am so sorry to hear about the loss of your mom. As a childhood friend, I remember your mom always being kind & loving towards me. She made me feel like one of her own. I will always hold a special place in my heart with memories of those days. Praying for y'all. What is your loss is heaven's gain. Sending hugs and much love.
Jo Ann Knight Lerch
Friend
July 23, 2021
We send our condolences to the family
Mary and Gary Lewis
Family
July 21, 2021
To the Kudron Family: We are sorry for the loss of your mother, and praying that comfort and peace will come forth during this season of life. God Bless!
Roger and Melody Smith
Other
July 21, 2021
Showing 1 - 3 of 3 results