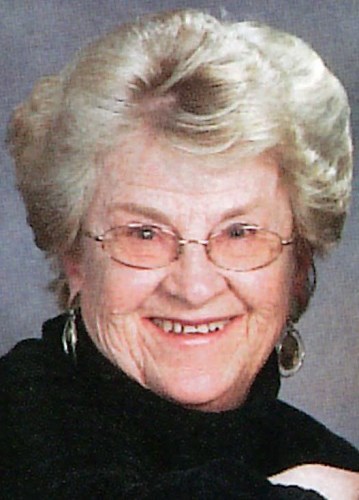 A Celebration of Life for Virginia (Van Berg) Smith will be held Saturday October 2, 2021 at 11:00 a.m. at the Federated Church, 2704 15th Street in Columbus. The service also will be live streamed on www.facebook.com/federatedchurch or www.federatedcolumbus.org/ (then click on the "You Tube" channel link).

Virginia died peacefully at home in Columbus, Nebraska on Monday, April 6, 2020 after a long illness. Virginia was born in Columbus on August 19, 1934 to M. H. and Viola (Schwartz) Van Berg, the eighth of nine children. She graduated from Kramer High School in 1952 and attended Doane College in Crete, Nebraska.

In addition to raising three children, Virginia worked outside the home most of her adult life. In the 50's, 60's, and 70's, she worked at the Columbus Sales Pavilion, founded and owned by her father. In the 80's and 90's she managed the office of her younger brother, Jack, a Hall of Fame thoroughbred race horse trainer.

In the late 90's, after the death of her older son, Virginia dedicated herself to community service. She founded and served as the president of the Pawnee Park Foundation in Columbus, which spearheaded a major renovation of the beloved park, including the replacement of the park's playground equipment and installation of the park's bike and running paths. Over the course of her leadership of the Foundation, it raised more than $400,000 to improve the park. For her community work she received the Columbus Sertoma Service to Mankind Award in 2000 and the Citizen Volunteer Award from the City of Columbus in 2013.

Virginia was a long-term member of the Federated Church, and she belonged to its Circle prayer and discussion group.

Virginia and Dwayne knew each other their entire lives. They started dating in high school and were married in Los Angeles, California in 1953 while Dwayne served in the United States Navy during the Korean War. Aside from a few years in San Diego and Lincoln, Nebraska, Virginia lived most of her life in Columbus.

She was profiled in a Lincoln (NE) Journal-Star column in 2000 for her work with the Pawnee Park Foundation, "Columbus Park Group has Dynamo Leading from Front." "The woman with gray hair, smiling eyes, and get-to-the-point personality," columnist Joe Duggan wrote, "is the good-humored Ma Barker of the Pawnee Park Foundation….in the midst of a 65-year love affair with Columbus."