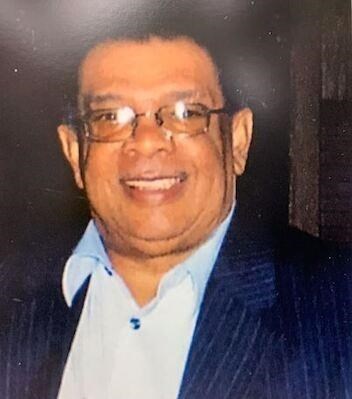 Remembering the Life of

August 8,1942 to the late Joseph and Mary Lou Saddler in Marksfield, LA. Ray was a devoted Catholic who enjoyed collecting various religious prayers which he often shared with friends and family.

Ray graduated from Castlemont High School in Oakland in 1961 where he began his track career and became a 2 time All American. Ray continued his education at Texas Southern University (1961-1965) where he was an oustanding "Track Star". While at TSU he was referred to by a reporter as Ray "Jackrabbit" Saddler because of his impressive speed on the track. Another sports reporter wrote in the local newspaper about his encounter with Ray.:

"In a preliminary Mile Relay, Saddler was waiting to run his leg of the race and he was eating a hot dog. Here he said, to a companion as his relay team member approached with the baton. Hold this, I'll be back in 46 seconds."

"And he handed his friend the hot dog and returned in

Ray later was a member of the U.S. Men's track team-quarter miler 440 where he competed around the world. Ray was tanked #2 in the U.S. men's 400 and he was featured in Sports Illustrated Magazine.

Raphael Saddler and Ruth Campbell were united in 2004 in Pittsburg, CA. While In Pittsburg, CA. Ray was a very active volunteer at the Pittsburg Senior Center. He generously shared his time and his warm giving spirit at the Center. Ray and Ruth often volunteered together. Ray later joined Ruth in Memphis, TN where they remained a committed couple until his death August 12, 2020.

Ray leaves to cherish his memory Ruth Campbell, his loving companion of 16 years, a son, Raphael Dumond Saddler (Charm), a daughter, Kimberly Childress (Andre) and his sister, Debra Saddler Stepter. He also leaves grandchildren, nieces, nephews, and a host of relatives and friends. Ray was full of wit and a true friend who will be greatly missed.


Published by The Commercial Appeal on May 31, 2021.
To plant trees in memory, please visit the Sympathy Store.
MEMORIAL EVENTS
To offer your sympathy during this difficult time, you can now have memorial trees planted in a National Forest in memory of your loved one.
MAKE A DONATION
MEMORIES & CONDOLENCES
0 Entries
Be the first to post a memory or condolences.