RICHARD EARL OAKLEY
FUNERAL HOME
Family Funeral Care Memphis
4925 Summer Ave
Memphis, TN
RICHARD EARL OAKLEY, 82, passed away on July 11, 2011 after a short illness. He was known as “The Senile Sorcerer” and his last business card stated “I Only Cheat a Little”. Richard was born November 1, 1928 in Memphis, TN and attended local Catholic schools. Richard was a self-taught musician who could not read music but could play most anything on the piano or organ after “listening’ a few times. He played his Hammond organ at local night spots from the Thunderbird Lounge, to Holiday Inns, to Shakey’s Pizza Parlor. For several years after the Malco Theater became “The Orpheum ”, he played the Orpheum’s pipe organ weekly before the Summer Film Series. Richard was interested in Magic since boyhood and has personally sparked the ‘magic bug’ in thousands of young and not-so young magicians. Early in his career he was an accomplished ventriloquist, whose favorite ventriloquist was ‘Rudy”. He traveled with the Royal American Shows carnival as a magician, performing at state fairs across the country. He worked at ‘The Fun Shop’, a local magic stop at locations downtown and after the move to Poplar Plaza and even at its present location on Highland near the University of Memphis. He was also the resident magician at ‘Trick or Treat’ on Perkins for several years. He leaves several cousins, Pat Michell, Nathan McGee, Leah Pleasants and Annette Buffalo of Memphis as well as Catherine Skinner of Oakland, TN as well as a host of friends. Family Funeral Care 901-761-8000 www.familyfuneralmemphis.com
Published by The Commercial Appeal on Jul. 13, 2011.
To plant trees in memory, please visit the Sympathy Store.
MEMORIAL EVENTS
To offer your sympathy during this difficult time, you can now have memorial trees planted in a National Forest in memory of your loved one.
Funeral services provided by:
Family Funeral Care Memphis
MAKE A DONATION
MEMORIES & CONDOLENCES
14 Entries
I met Richard at trick-or-treat on Perkins. My first encounter was a visit to Richards house where we shared our magic knowledge. Of course it was more like I was the student and he was the teacher. Ha ha. he was always so very nice to me. During the few years we met off and on, he had given me a couple of close-up magic tricks that I still own and used today. If it had not been for Richard I would never have gotten back into magic. I really learned a lot from him and also where to get a good barbecue sandwich. He used to love going to three little pigs. It is now 2019 and I still miss him. He was definitely a unique, one-of-a-kind person that I feel honored to have known.
Corbin Knighten
February 25, 2019 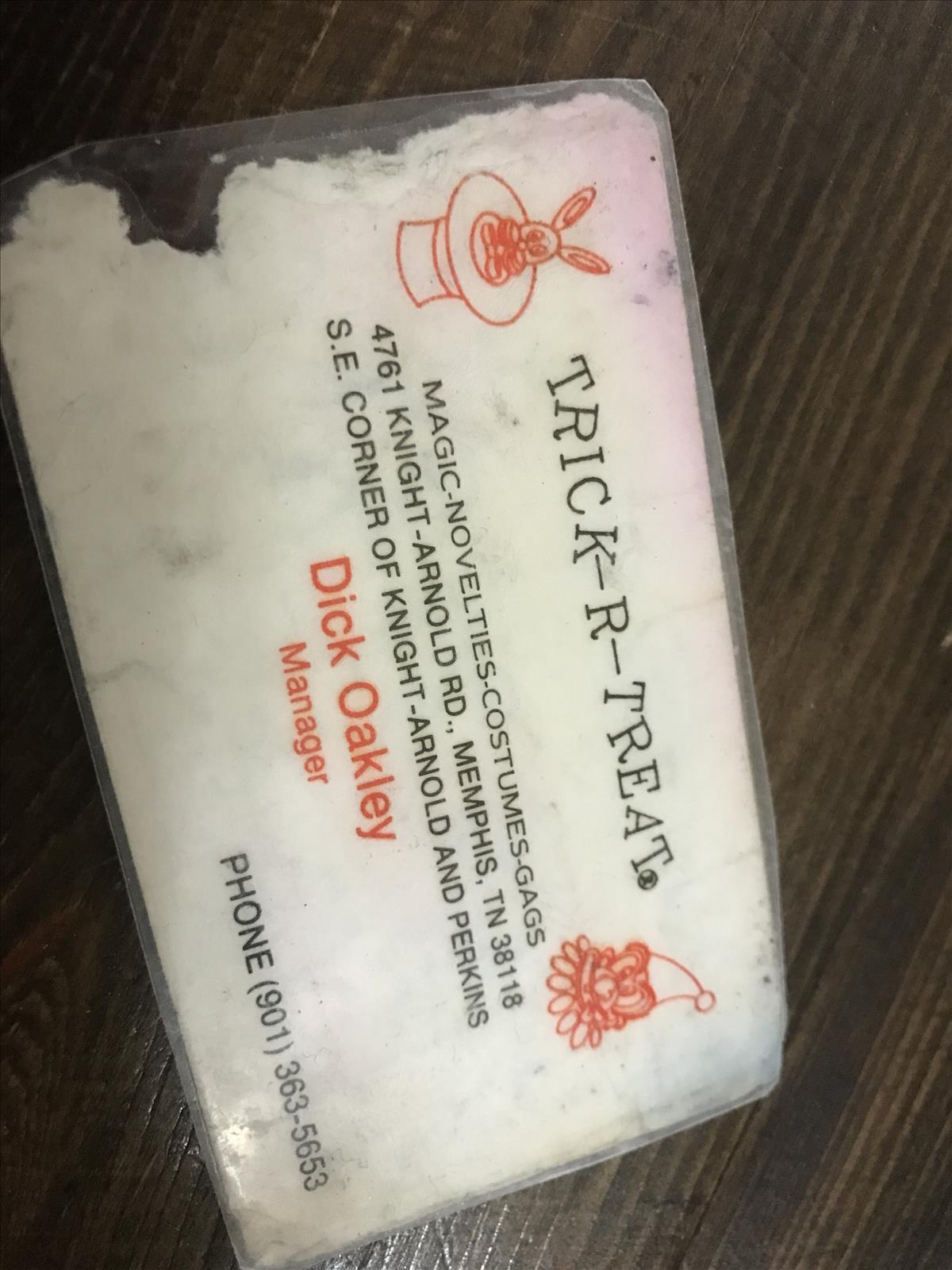 I met Richard in the early 90's. He was such an inspiration and fun to be around. Although we only spoke a few times after I moved away he left a mark on me. I have had his business card in my wallet for over 20 years. RIP my friend ;)
Jason Daly
January 17, 2017
Richard sold me my first real magic books, Slydini, Table Magic. Always liked that guy. Gosh, how fast the years go by. Miss you, Dick.
Chad Anthony
April 16, 2016
Dick Oakley was the man who taught me that, "A little magic will buy a lunch at nearly any Restaurant." And he always added, "... if you play your card just right."
Barclay Frazier
May 18, 2013
Dick Oakley was a visual artist.

I always had the same emotion the first time he would make a deck of cards change color, or produce a gigantic threaded metal nut from under an empty bowl- - - awe.

Fare well in your new venue.

Jim Eubanks (Germantown, TN)
January 10, 2012
see ya' down the road.
David Sweeney
September 21, 2011
I first met Richard "Dick" Oakley in the early 80's when he was at The Fun Shop at Poplar Plaza. I had been studying magic since 1968 and I thought I "knew it all". lol He taught me more about magic (not tricks) than anyone I knew. What he could do with a mere deck of cards, or a single coin was phenomenal. I just loved stepping back and watching him work the crowd. What a performer indeed. Thank You my friend for some wonderful memories.
Jeffrey Day
July 20, 2011 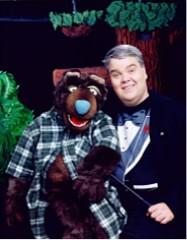 I knew Richard most of my life. I was the kid that wanted to do one handed magic while working a puppet. He thought that was so crazy and would pook fun whenever it came to mind. I was his friend nearly 20 of the forty years that I knew him. He was my extended Dad who I could talk to about anything and know he would give honest advice. This helped me through some difficult years. I will miss him so much!
Rickey Provow
July 15, 2011
I grew up knowing Mr. Richard through my dad, John Sorrell. He and Richard were friends for as long as I can remember. My favorite memory is of Richard playing the organ at Shakey's! (Maybe because it involved pizza as well...!) As I struggled to learn to play the piano, I remember being very impressed that he could play almost anything without even having music. Another thing that 'impressed' me was the fact that he never drove! Driving was such a milestone for me, I just could not fathom someone never doing it! The strongest memory, however, is of him being a true friend to my dad for over 40 years. He will be missed.
Beth Ramsey
July 14, 2011
Richard, when he was working at The Fun Shop, helped me get the most memorable Christmas present ever for my magician husband. It was a new book that they had just received that week. Jim had no idea I had obtained it. Richard was great magician and resource for young people who were interested in learning. I know he will be missed.
Harriet Surprise
July 13, 2011
I've been lucky enough to know Richard since 1975 when he sold me my first magic. Later in life I was proud to call him a friend & mentor. There are few people in this world with so many stories to tell & a willingness to freely share his years of knowledge about magic & life. Richard will be missed by many.
Steve Thomas
July 13, 2011
Richard sold me my first book on card tricks and a deck of trick cards when I was in my twenties. When I got hooked, he was there to suggest more books and help me with my sleight of hand skills. I probably would not be a professional magician today if I had not crossed paths with Richard Oakley.
Doug Sparkman
July 13, 2011
In 1942 to 1944 Richard and I were residents of Gailor Hall "Home For Boys" at 1055 Poplar and 4093 Summer. Richard's talents in Magic and Piano began while at Gailor Hall. Gailor Hall was renamed Memphis Boys Town in 1952. Go to www.gailorhall-memphisboystownalumni.org to see its history. Rest in Peace Richard.
Paul Beck
July 13, 2011
Offering our deepest condolences during this difficult time.
Gina Gaffney and Staff of Family Funeral Care Summer Avenue Chapel
July 13, 2011
Showing 1 - 14 of 14 results