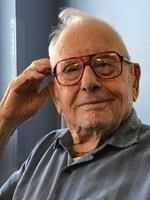 Concord, NH — Charles A. Richey of Concord, N.H., died Sept. 27, a few weeks short of his 102nd birthday. He is survived by his sons, Charles Richey Jr. and Timothy J. Richey, daughter-in-law Susan Richey, six grandchildren and nine great-grandchildren. He was predeceased by his wife of 69 years, Nikki Richey, in 2013, and son Gary K. Richey, in 2003.

A member of the "greatest generation," he was born Nov. 15, 1919, in Gainesville, Texas to Jesse Dewey and Velma Hatcher Richey. He was only 16 when his mother died, leaving him to help care for his sister Agnes and his brother Jack. Forgoing college where he could have played basketball, he worked instead alongside his father as a farm laborer. He then signed up for the Civilian Conservation Corps during the Great Depression, enabling him to send home part of his pay to his father.

He enlisted in the U.S. Army Air Corps in 1942 during World War II. After basic training, he learned how to operate and repair flight radios and instruct other radio operators.

Charles met Nikki on a double date in 1943 while he was stationed at Bolling Air Base in Washington, D.C. They were married the following year in North Weymouth, Mass. where he asked the USO to find him a best man from Texas.

From March 1945 to January 1946, he flew "the hump" aboard C-87, C-54 and C-46 cargo aircraft between India and China or as many pilots called it, "the aluminum trail," due to the many planes that crashed. After the war, the family was stationed in Texas and Spokane, Washington. In 1952, he was assigned to the U.S. Embassy's Air Attache aircraft as the radio operator in Tripoli, Libya. From there he was stationed in Kansas City, Dallas, Okinawa and then Virginia. He was reassigned to the Defense Communications Agency (DCA) in Arlington, Virginia, where he retired from the U.S. Air Force in 1964.

He then worked at the Goddard Space Center, the U.S. State Department and the DCA in the civil service.

After retirement, the couple moved to Littleton, N.H. where they went hiking, cross country skiing and traveled extensively around the country and world. He especially loved fly fishing in the local streams, and on annual trips to Canada. He also enjoyed volunteering to deliver meals and helping seniors with their taxes.

As a member of his generation, he was devoted to family and country. He lived simply, spoke quietly and loved greatly, and will be greatly missed.

A memorial service will be held at a later date at the State Veterans Cemetery in Boscawen, N.H.

Published by Concord Monitor on Oct. 5, 2021.
To plant trees in memory, please visit the Sympathy Store.
MEMORIAL EVENTS
To offer your sympathy during this difficult time, you can now have memorial trees planted in a National Forest in memory of your loved one.
MAKE A DONATION
MEMORIES & CONDOLENCES
1 Entry
I have so many great memories of my Uncle Charles and Aunt Niki. And I will keep reminding myself of these memories and they will continue to bring a smile to my face.
Kathy Nichols Noaum
Family
October 19, 2021
Showing 1 - 1 of 1 results