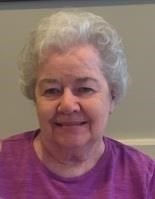 Franklin, NH — Edwina C. Shaw, a longtime resident of Franklin and Salisbury, NH passed peacefully on October 28, 2021 after a period of declining health. Edwina was born at home in Franklin on March 3, 1935 to Lionel Paquette and Laura (Gravison) Paquette Beaupre. She attended St. Mary's School and was a graduate of the Franklin High School class of 1953. Edwina was employed by the Franklin Regional Hospital for many years before retiring in 2002.

Many will remember Edwina for not only her incredible work ethic, but also her ability to command the dance floor. Oh, how she loved to dance! She was active in antique car clubs along with her husband and enjoyed touring New England in their restored Studebakers. Edwina was an avid reader who amassed an impressive personal library. In her later years, she enjoyed mastering crossword puzzles and jigsaw puzzles.

Edwina was predeceased by her parents, her husband Frederick C. Shaw, her stepson Frederick Shaw, her sisters, her stepfather, and her step siblings. She is survived by her daughters Patricia (Dane) Accavallo and her husband Lee of Estero, FL, and Katherine (Dane) Carroll and her husband Pete of Ashburn, VA. She is also survived by her grandchildren, Sarah Vespa, Angela Vespa, Megan Godfrey (husband Terry), Dan Carroll, and Ben Carroll (wife Maura), along with five great grandchildren and a sixth due in December.

A graveside service will be held at Oak Hill Cemetery in Salisbury in late spring, with an announcement to follow.

Edwina's family would like to thank the staff at The Golden Crest assisted living facility for the loving care and concern they have provided her over the last two years. Additionally, the family would like to extend their warmest thanks to the Franklin VNA & Hospice who provided so much comfort over the last several months. For those who would like to do so, contributions to either of these fine organizations in Edwina's memory would be welcome, The Golden Crest Activities Fund, 29 Baldwin St., Franklin, NH 03235 or Franklin VNA & Hospice, 75 Chestnut St., Franklin, NH 03235.

Please visit www.neunfuneralhomes.com for further information, an online guest book, or to share a memory of Edwina.

Thibault-Neun Funeral Home, 143 Franklin Street, Franklin, NH is assisting the family of Edwina.
Published by Concord Monitor on Nov. 3, 2021.
To plant trees in memory, please visit the Sympathy Store.
MEMORIAL EVENTS
To offer your sympathy during this difficult time, you can now have memorial trees planted in a National Forest in memory of your loved one.
Funeral services provided by:
Thibault-Neun Funeral Home
MAKE A DONATION
MEMORIES & CONDOLENCES
2 Entries
Patricia and Katherine, I am sorry to hear of the loss of your mom. My deepest sympathies to you and your families. I remember your mom as a welcoming, lively, hardworking woman. It seems she never changed. May you find comfort in the memories and strength in each other. My thoughts are with you. "Let us read, and let us dance; these two amusements will never do any harm to the world." -Voltaire
Kevin S. Marshall
November 4, 2021
Offering our deepest sympathies during this time.
The Staff of Thibault-Neun Funeral Home
November 3, 2021
Showing 1 - 2 of 2 results