BORN
1928
DIED
2012
FUNERAL HOME
Bennett Funeral Home
209 North Main street
Concord, NH
ALLENSTOWN - Surrounded by her loving family, Newvart "Newvie" (Vosgershian) Goodwin quietly passed away Wednesday, May 2, 2012 after recent declining health. She was the beloved wife of the late Lewis Goodwin. A former resident of Hooksett and Allenstown, Newvie spent her final months as a resident of The Mountain Ridge Center in Franklin where she received much kindness and care.

She graduated from Stevens High School and married her one true love, Lewis A. Goodwin of Claremont. They settled in Hooksett where they raised their four children.

Newvie held a variety of jobs throughout the years ranging from electronics assembly to Avon lady. She took particular pride in her position as a lunch lady at the Three Rivers School in the Pembroke school system, where she won several cooking awards. In her later years, she worked as a home care aid for the Concord VNA. She derived great joy from helping others.

Always loving and giving, Newvie filled her spare time with many interests. As a young mother, her home became a haven for all the neighborhood children, where they could always count on Mrs. Goodwin to spearhead carnivals and lemonade stands. She was a den mother for her son's Cub Scout group and was highly active in the Hooksett Youth Athletic Association. In her later years, Newvie volunteered for the Allenstown soup kitchen and performed with the "Hooksettites", an entertainment troupe that traveled to nursing homes and hospitals. She enjoyed being a member of the Red Hat Ladies of Allenstown. Newvie received great pleasure from creating crafts, which she always gave to family and friends for Christmas or birthdays.

A sweet, gentle, generous woman, she was a favorite aunt to many nieces and nephews. Newvie will be greatly missed by her family and many friends.

She was the mother of Linda Nepveu and her companion, Nelson Vance of Nashua, Paul Goodwin and his wife, Bernadette of Imperial, Penn., Sharri Merriam and her husband, Joseph of Franklin, and daughter-in-law Kathie Goodwin of Concord.

She was predeceased by her son, Allan Goodwin and son-in-law, Donald Nepveu.

Relatives and friends are invited to celebrate Newvie's life at a memorial service immediately following the calling hour at the Bennett Funeral Home.

Newvie's family is grateful for the care she received at Mountain Ridge Center. In lieu of flowers, those wishing may honor Newvie with a donation to the Mountain Ridge Residents Council, 7 Baldwin Street, Franklin, NH.

The Bennett Funeral Home of Concord is in charge of the arrangements.

Messages of condolence may be offered at www.bennettfuneral.com.
Published by Concord Monitor on May 5, 2012.
To plant trees in memory, please visit the Sympathy Store.
MEMORIAL EVENTS
To offer your sympathy during this difficult time, you can now have memorial trees planted in a National Forest in memory of your loved one.
Funeral services provided by:
Bennett Funeral Home
MAKE A DONATION
MEMORIES & CONDOLENCES
9 Entries
Sherri, Paul and Linda. I was sorry to hear of your mother's passing. I remember always having a wonderful time when Barbara and I would come over and visit and go swimming in the pool. She was a very kind and loving person and will hold a special place in my heart.
Deborah Ouimette-Butterfield
May 15, 2012 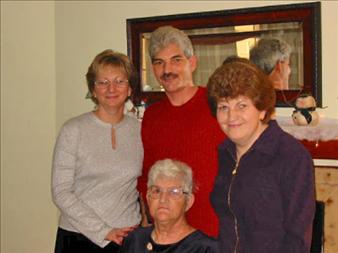 Thanks to everyone for your kind words of love and support. We were deeply moved by the turnout honoring my mother's life on Saturday. It is clear that she was much loved and will be greatly missed.

Kim: your sweet memories made me smile on one of my darkest days. Thank you.

Danny and Gail: You and your family are part of some of my best childhood memories. My mother loved every one of you as her own.

Red Hat Ladies: seeing you at my mother's life celebration brought to us my mother's sense of fun and spirit.

Marilyn: Thank you for the mass. Sharri and I were not aware that you had kept in touch with my mother. Auntie Naz meant so much to me and I miss her. Now my mom can join her in decorating cakes!Sisters together again.

Marie Anne: I always remembered you as a sweet, gentle spirit, someone my mother referred to with great tenderness. Your memories brought my senses alive with the comforting tastes, scents and touch of family times together. Thank you.

There are so many others to thank. You know who you are.You were there for us and, more importantly, there for mom. We appreciate that you shared a part of her heart and participated in the celebration of her life with us.

We know she is at peace.
Linda Nepveu
May 14, 2012
Dearest Cousins Linda, Sharri, and Paul,

From afar, I send each of you loving hands in prayer, arms for hugs, and joy in your Mother's life's great memories. Mine are now 51 years old, yet things that continue through lifetimes: how she magically whipped up huge cakes with fluffy boiled frosting from her electric mixer on the stand in the kitchen, and how she loved to read the "funnies" in the morning paper and laugh at all the jokes at precious Christmas gatherings in Claremont where my most cherished childhoold memories remain, from the scent of the real tree's needles, the
taste of orange Jell-O with sliced bananas, to the great feeling of being with all my cousins, and the light itch on the backs of my legs from sitting on the mossy-green colored living room chairs when wearing a dress...and occasional weekend visits in summer, when Sandra, David, Danny and Diane would come run around, while Marilyn and I would enjoy relaxing on the lawn. Each Aunt is precious to me...each with different gifts that I have happily held; especially welcoming generosity and love. Newvie, with her baking, cooking, laughter in life, spur of moment diving in to things with gusto along with her imaginative creativity to make thoughtful, pretty things and her kindness indeed must live on through her children, my dear Cousins!

Love to you all in celebrating her life, the gifts she gave of herself, and in her new spiritual life, leaving her magic with each of you!

Cousin Marie Anne
Omaha, NE
craft gifts and cards will always be with me
Marie Anne Smith
May 13, 2012
Dear Linda and Sherrie, Please accept our deepest sumpathy on the passing of your mother and my aunt Newvie, She was such a kind and gentle spirit. A Catholic Mass will be celebrated on my mother's birthday May 18, by the Reverand Stanley Piwawar in Newvie's honor. I know she loved walking to church and joining her friends there. God bless you all at this time. We will hold you in our prayers. Marilyn and Ronald Gilbert
May 12, 2012
We all at the Red Hatters miss you so much. Always fun to be with. Will remember all the kindness you showed us. Rest in peace. The Foxy Red Hatters from Allenstown
May 8, 2012
Dear Linda, Your mother was a gentle soul who raised a beautiful daughter. My thoughts and prayers are with you and your family.
Tonja
May 7, 2012
She was always a great friend & of course the four boys will always remember you & your children. We had such fun when we all went in my VW bug to go shopping..Marlene (Ray) Anthony & family
Marlene Anthony
May 6, 2012
You were always fun to be with. We loeve you and will miss you Aunt Newvie. Rest in peace. <3
Dan & Gail Newton
May 5, 2012
I was one of those "neighborhood kids" and my brother (Gilbert) and I stayed at Mrs. Goodwin's house quite regularly. She taught me a lot about cooking, crafts, how to sell your belongings at a flea market, and got me my first baby sitting job (that she also had to rescue me from because the baby threw up all over me and I didn't know what to do). We did a lot of things together, however the one thing I will remember most about her is how she taught me to make Candy. Lots of it! So much of it, that at one point in time, we actually had a little business going!!! She was quite an entrepreneur when she wanted to be.:)
I am so happy I was able to see Mrs Goodwin again as an adult, and she was able to meet my son (Sam), who I now take to the flea market and make candy with!
Rest in peace Mrs. Goodwin. Your beautiful sole has certainly touched my life and many others, and I know you have a wonderful place in Heaven.
Kim DuBois Little
May 5, 2012
Showing 1 - 9 of 9 results