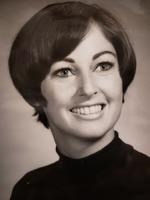 Penobscot, ME — Pamela Ruth McDonald, formerly of Hopkinton, NH, died April 16, 2021 at home in Penobscot, ME from T-Cell Lymphoma. She was born in Santa Cruz, CA on November 17, 1947 to Paul Laughlin McDonald and Marvis Lyle Campbell McDonald.

Her family moved to a farm outside of Stockton, California when she was a toddler, where her parents grew almonds, walnuts, and cherries. It was there she developed a love of the natural world and first felt God's active presence in her life.

Pam graduated from Linden High School as class Valedictorian, was active in the local chapter of the International Order of Rainbow for Girls and was awarded the Grand Cross of Color for exceptional service to Rainbow and her outreach to the community. Pam matriculated at Stanford University in Palo Alto, CA graduating in 1969 with an English degree, having spent her junior year in Tours, France.

She served as a mentor to new foreign students adapting to life in the U.S. and was greatly influenced by student demonstrations promoting social, gender and racial justice and equality.

Pam began a long career in nonprofit development at the Stanford University Development Office, where she created a program to train major gift volunteers and to honor major donors to the University. She later served as Associate Director of Foundation Giving, responsible for raising $30 million from California foundations in support of the University's $300 million 'Campaign for Stanford' in the 1970's. She also served in various volunteer capacities for the Stanford Alumni Office, including as founder of both the Stanford Club of Western Washington and the Stanford Club of the San Joaquin Valley in central California, and as Regional Director of Individual Giving for New Hampshire and Vermont during Stanford's $1.1 billion 'Centennial Campaign', which resulted in her invitation to Stanford Associates, an honorary organization of 3,000-plus Stanford alumni who have demonstrated significant and long-standing volunteer service to the University.

During these early phases of her career, Pam, at age 26, was diagnosed with Lupus.

After moving with her young family from California to New Hampshire in 1987, Pam worked for five years with Wiita Family Realty in Concord, where she received numerous sales awards, before returning to the nonprofit community for the next twenty years.

Throughout her professional career Pam worked to strengthen nonprofit organizations by providing their staff, board members, and volunteers the skills to raise the resources necessary "to build lives, change lives, and to save lives." In recognition of her professional accomplishments, Pam was selected for both Leadership Greater Concord and Leadership New Hampshire.

Pam was an active volunteer in the Episcopal Church throughout her life, believing that strong Christian Education programs provided foundational moral and ethical values to children and young adults so they would make choices to help make the world a better place. She served as the volunteer director of Christian Education at St. Thomas, Medina, WA and at St. Andrew's, Hopkinton, NH, and was a member of the Vestry at those congregations as well as at St. John's, Dunbarton, NH.

She was commissioned by the Bishop of New Hampshire as a Diocesan Lay Preacher.

Pam served three terms as President of the Hopkinton Woman's Club and was the recipient of the Muriel Lima Award for exceptional service to the Hopkinton Community. She was an active volunteer in her children's schools and loved the many opportunities to serve as a room mother.

After surviving a year-long battle with Lymphoma in 2009, Pam felt called to ministry with the sick and dying. She entered Episcopal Divinity School at the age of 63 and graduated with a Masters of Divinity Degree. She was awarded the John Robbins Hart Memorial Prize, presented by the faculty for excellence in preaching. She joined Compassus Hospice and Palliative Care as a Chaplain, supporting patients and their families at end of life, and frequently was invited to officiate at their memorial services.

Pam 'semi-retired' and moved to Maine with her husband Chris in 2019 to their home on Toddy Pond. She delighted in the wildlife that shared the property with them, especially bald eagles alighting in the trees, surveying lunch opportunities at water's edge. She learned to sail and loved the peace and serenity of the rural environment, even as she dealt with a new, more aggressive form of Lymphoma.

Pam's greatest joy in life was her family. She is survived by her devoted husband Christopher W. Closs; her three children, Joseph Robinson "Jay" Truesdale, IV and his wife Jacqueline of Loudon, NH, and their children Ella, Augusta, Charlie and Alden; Katharine Campbell Truesdale and her husband Cameron Frothingham of Great Cranberry Island, ME, and their sons Grayson and Merrin; and Benjamin Laughlin Truesdale and his wife Helene St. Leger Buchan of Philadelphia, PA; her brother Paul Michael McDonald and his wife Patti of Rancho Santa Fe, CA; and 16 beloved nieces, nephews, and great nieces and nephews. She was predeceased by her parents, and her sister Sandra Gene McDonald Clowes.

Pam will be interred at the Bay Cemetery in Penobscot, ME, a peaceful site overlooking the Northern Bay.

Pam, author of the foregoing, asked that memorials in her name be directed to nonprofit organizations or churches that work for justice and equity for all people, especially remembering the poor, the homeless, the sick, and those suffering on the margins of our society.

Take a moment, reach out, and touch others with gifts of Love and Hope.

A celebration of Pam's life will be held at St. Andrew's Episcopal Church, Hopkinton, NH on Sunday, August 29, 2021 at 1:30 PM, followed by a reception for family & friends.
To plant trees in memory, please visit our Sympathy Store.
Published by Concord Monitor on Jun. 20, 2021.
MEMORIAL EVENTS
Aug
29
Celebration of Life
1:30p.m.
St. Andrew's Episcopal Church
, Hopkinton, NH
MEMORIES & CONDOLENCES
9 Entries
I'm very sorry to hear of Pam's passing. I remember her fondly from her days at CONFR. Thinking of her and her family.
Michele Talwani
July 1, 2021
Went to school with Pam at Linden. She was such a light! I found peace in her words. She inspired me in so many ways. I have missed her on FB and decided to check on her and found this. Saddens me but I know where she is...Home...and I know the Angel's are rejoicing! Sending you all peace as she would want. Dont cry for me...I've done it all...loved much...and rejoice now! Gods blessings.
Barbara Freeman
Friend
July 1, 2021
Pam was a very special soul. She brought a sense of peace and love to all our hospice patients as well as to our office. Her presence and beautiful smile is missed and we hang on to beautiful memories of her in our hearts
Michele Martino
Friend
June 21, 2021
Pam was a great gal...went to school K-12, always community involved. A Cheer leader for our football team. I remember her Austin-Healy Sprite sports car and how a bunch of us lifted it up on the High School roof to celeberate one of her accomplishments.....JIM HAMILTON Linden California
JIM HAMILTON
Neighbor
June 20, 2021
Wow I met Pam and her husband Chris in Antigua. We shared a taxi to our hotel from the airport. I was by myself and we talked the entire ride. It was my first time in Antigua but they regularly vacationed there. Pam knew the history of the island’s sugar industry and the history of the island’s people. She was such an amazing, passionate person that I left the ride feeling so good about the world, life, and my future. We decided to friend each other on Facebook and I’ve been following her life the past few years. It’s so sad to see such a special person suffer. Even though I hardly knew her, she made such an impact on my life. I will always remember that taxi ride and how I felt around her.
Tara Mastriano
Acquaintance
June 20, 2021
My heart fills with compassion when I remember and think about Pam. We spent many hours through CONFR thinking and planning opportunities to help nonprofit executives strengthen the capacities of their organization in service to their missions. She inspired so many of us to reach for new levels of excellence and lived this out in her own life. I am deeply affected by her passing and send my love and condolences to her family and all who lived at some time in her light.
Laura Chaney
Friend
June 20, 2021
Pam was always so positive. I met her and her family at St. Andrew's and enjoyed various interactions there, but also valued her professional advice in nonprofit fundraising. The drive to take on a new calling at 63 was inspiring and of course her determined battle to not let the cancer get the best of her. She was ALWAYS an inspiration. Such a big loss. Hugs to you all.
Ruth Smith
Friend
June 20, 2021
My deepest condolences on the passing of Pam. I had the honor of working with her at Compassus. She was a blessing to all she served, not only our patients and their families, but to our staff, as well. She was a gentle, yet bold and passionate spirit housed in a petite frame. She will forever be a part of me and my continued Hospice work, and I, as well as the patients and families I serve, are all the richer for it.
JENNIFER POULIN
Coworker
June 20, 2021
I enjoyed our time together working at Compassus Hospice in New Hampshire. Pam was a caring coworker and friend. I know her patients were blessed by her.
Vinny Joy
Friend
June 19, 2021
Showing 1 - 9 of 9 results