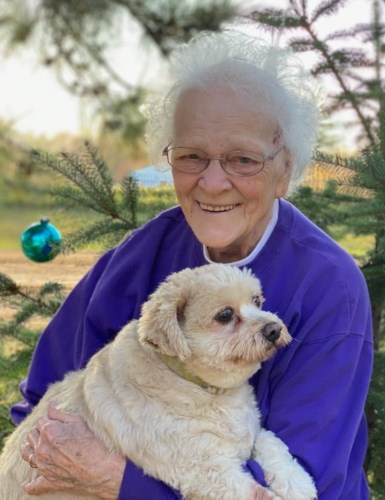 Florence married Delbert Swanson on June 25, 1950. They were married for a wonderful 55 years, until he passed away in January of 2005. They had four children and lived in the town of Rush City for 10 years, until they built their current home out in the country near Rush Point. Florence worked various jobs throughout the years, but retired from Plastech Corporation in Rush City after many years. She was a member of the First Evangelical Lutheran Church in Rush City. Some of her favorite pastimes were playing cards with her large group of friends at the Rush City Senior Center, meeting for coffee with friends at Burger King, and numerous outings with family and bus trips to the casinos. Her favorite hobbies included reading chapter books daily (she had read 1,507!), shaking dice and playing the game Farkle with family, playing cribbage daily with Kevin, baking cookies and banana bread and canning from her large garden. She especially loved her dog and best friend, Ralphie of 11 years! She was known for her "spunk" and "telling it like it was", and she always put a smile on everyone's face that she met. She will be remembered for her caring, generous and loving ways. She lived a very simple life and always put everyone else first.

Pastor Nathan Baker-Trinity will officiate at funeral services for Florence: 11 AM, Friday, December 3, 2021 with a time of visitation and reviewal planned from 5-8 PM, Thursday, December 2 and also one hour prior to the service all at the First Evangelical Lutheran Church in Rush City. The interment will take place in First Lutheran Cemetery, Rush City.