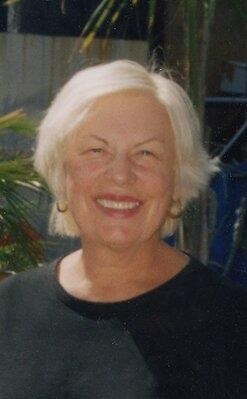 Grace graduated from Vassar Univ. in 1959 and was active in the Alumni Assoc. She began a career in banking as the Trust Officer at Pennsylvania National Bank (PNB). After starting her family, Grace became a substitute teacher for many years. She was also incredibly active in the PTA. She was a longtime Past Pres. Of the Pennsauken PTA, former Vice Pres. of the Second Region of NJ, as well as Past Pres. of the NJ State PTA. Grace earned her Master's in Divinity from Eastern College now Palmer Theological Univ. and became the Minister of the Riverside Methodist Church. After passing the mandatory retirement age for Senior clergy, Grace joined Haddonfield United Methodist Church in a parttime capacity. Additionally, Grace was an avid Master level Bridge player, member of the Lions Club of Camden, member of the Merchantville & Tavistock Country Clubs.

Grace's family will receive friends on Tuesday, April 6th, 10-10:45 AM, at the Haddonfield United Methodist Church, 29 Warwick Rd., Haddonfield, NJ; where her Service will follow at 11 AM. Entombment, Locustwood Cem., Cherry Hill, NJ. In lieu of flowers, please honor Grace in her mission to end hunger by donating to the Food Bank of South Jersey, 1501 John Tipton Blvd., Pennsauken, NJ 08110 (www.foodbanksj.org)


Published by Courier Post from Apr. 1 to Apr. 2, 2021.
To plant trees in memory, please visit the Sympathy Store.
MEMORIAL EVENTS
Apr
6
Visitation
10:00a.m. - 10:45a.m.
Haddonfield United Methodist Church
29 Warwick Rd, Haddonfield, NJ
Apr
6
Service
11:00a.m.
Haddonfield United Methodist Church
29 Warwick Rd, Haddonfield, NJ
Funeral services provided by:
Kain-Murphy Funeral Services
MAKE A DONATION
MEMORIES & CONDOLENCES
Sponsored by Kain-Murphy Funeral Services Holl-Murphy Funeral Home.
5 Entries
On behalf of colleagues and friends in ARMS (Association of Retired Ministers and Spouses), we extend our heartfelt sympathy to Grace's family and to her many church friends. She will be missed.
Bob and Linda
Friend
June 6, 2021
To the Benson and Hunter families, so sorry to hear “Aunt” Grace passed. So many fond memories of her. She and “Uncle” Dab are together again.

Chris Eife
Friend
April 11, 2021
Such sad news. Gracie was one of my favorite people. She was always so positive and had a wonderful smile. We played bridge together for years and she was a formidable player. I have been missing her all this year and will continue missing her each and every time I think of her. I know she had a very strong faith so now she is at peace in Heaven and I am sure she is smiling down on us. Love you, Gracie, Sue Hill
Sue Hill
Friend
April 4, 2021
Our deepest condolences are with Emmy and her children and grandson and also our hearts go out to Grace’s beloved daughter, Gracie, son-in-law, Dave, and her three most treasured Grandsons. We will always remember Grace in our hearts, her smile, her friendship, her love and her most precious sense of humor. We have many, many wonderful memories of Grace, hosting her New Year’s parties always were always a highlight, traveling to Aruba with Grace will forever make me smile. If there’s one thing we will forever bring smiles to our hearts, it will be Grace’s sense of humor and infectious smile. God be with those you left behind Gracie, Heaven gained a great lady. Rest In Peace forever with your beloved Dab.
Maryann & Todd
Friend
April 3, 2021
I was saddened to learn of the loss of Gracie. She was a lovely person. We grew up in Shamokin, belonged to the same church and went to the same high school. Our parents were close friends. I am slightly younger than Gracie and Emmy but was always fond of them both. I offer sincere condolences to her family and friends.
Judy Lynch Stoddard
Friend
April 2, 2021
Showing 1 - 5 of 5 results