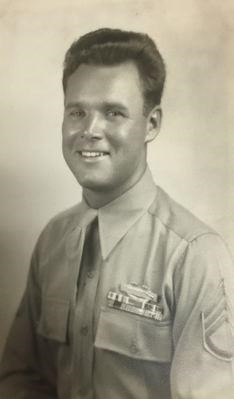 Matthew J. "Pete" Ott, 97, entered eternal life, Tuesday November 22nd, peacefully with family at his side. Pete resided at Collingswood Manor, with his wife. He was a longtime resident of Pennsauken, New Jersey.

Pete was born and raised in Camden, NJ. He graduated from Camden Catholic High School in 1936. He proudly served his country during World War II in the Army, where he served as a Staff Sergeant. He was the recipient of the Purple Heart, Asiatic Pacific Theater Campaign Ribbon with 2 service stars, and awarded the Silver Star for gallantry in action in the Philippines. Due to his war injury, he was sent stateside to recover in Massachusetts, where he met his future wife Marilyn. They celebrated their 70th wedding anniversary this past April.

Pete was a pressman for Curtis Publishing for over twenty years. He later worked for Pennsylvania Hospital as a printer, where he retired from in 1985. He found retirement too quiet and worked part-time for Lee Auto Supply, delivering tools and supplies to many auto garages in the area.

While raising five children, he also volunteered at St. Peter's Roman Catholic Church, helping with various ministries. He was an usher and a charter member of the St. Peter's Council for the Knights of Columbus #6735. He was a fourth degree knight for thirty-four years. He served as Grand Knight twice and was a member of the McCarthy Assembly. Pete forged life-long friendships while being a member of the Knight's.

Pete loved to travel to the coast of New England, especially to tour lighthouses. He liked to collect nautical items for his house projects. Pete loved to work with his hands, whether it was a small repair or a full project. Woodworking was his passion. Over the years, his children could find him sanding away on his next project. Pete was an avid dancer and would go ballroom dancing with Marilyn on Saturday nights.

He enjoyed attending his grandchildren's activities, including dance and music recitals, and sporting events. He even attended Veteran's Day at their school, where he shared many war experiences. Pete will be missed by all.

Pete was born to the late Pierson and Violet Ott nee Mason in Camden, New Jersey. He was preceded in death by his brother, James Ott. He is survived by his wife Marilyn, nee Learned, his sister Dorothy Dietert. His five children Jacqueline and husband Jonathan Bonner, Catherine and husband Neil Corrado, Steven, Richard and wife Donna, Jonathan and wife Patricia. Eight grandchildren Tom, Ondine, Christopher, Micaela, Ashley, Alicia, Amanda, and Alexis. And many cousins, nieces, and nephews.

Relatives and friends are invited to attend his visitation on November 29, 2016 from 7pm-9pm and on November 30, 2016 from 8:30am-9:30am at Inglesby & Sons Funeral Home, located at 2426 Cove Rd., Pennsauken, NJ 08109. A Mass of Christian Burial will be celebrated on November 30, 2016 at 10am at St. Peter Church, located at 43 W. Maple Ave., Merchantville, NJ 08109. Pete will be laid to rest at Calvary Cemetery in Cherry Hill. In lieu of flowers, memorial donations can be made to St. Vincent De Paul c/o St. Peter or Knights of Columbus St. Peter #6735. To post photos, share a memory, or send an online condolence, please visit www.inglesbyfuneral home.com.

Our prayers and thoughts are with you.

Brothers and Sisters of Christ the King OFS Fraternity.
Kathleen Fletcher, OFS
November 29, 2016
Rest in peace Uncle Pete. I'll never forget our times in Martha's Vineyard. You taught me so much about fishing but also about always doing the right thing. Love you!
Stephen Smith
November 28, 2016
My husband Walt and I send our most heartfelt condolences to the entire Ott family. Pete worked with us at Lee Auto Supply and what a great employee he was! Exemplary! It was a pleasure to be around him. He always had a kind word or a story to tell. Even after he retired, he would come back to visit. We will miss him.
Monica Lee
November 27, 2016
Showing 1 - 3 of 3 results