Published by Courier Press on Oct. 25, 2015.
To plant trees in memory, please visit the Sympathy Store.
MEMORIAL EVENTS
Oct
26
Calling hours
2:00p.m. - 8:00p.m.
Alexander Funeral Home-North Chapel
4200 Stringtown Road, Evansville, IN
Oct
27
Calling hours
10:30a.m.
Alexander Funeral Home-North Chapel
4200 Stringtown Road, Evansville, IN
Oct
27
Funeral service
11:30a.m.
Alexander Funeral Home-North Chapel
4200 Stringtown Road, Evansville, IN
Funeral services provided by:
Alexander Funeral Home-North Chapel
MAKE A DONATION
MEMORIES & CONDOLENCES
Sponsored by Guy Jones.
34 Entries
I had the pleasure to meet Ernie long ago in my broadcast days. A great person in so many aspects. My thoughts and condolences to his family for the loss of such a man.
David Harrison
November 29, 2015
I never had the pleasure of meeting Ernie, but I am so incredibly sorry for your loss. He was OBVIOUSLY very loved, not only by his family, but an entire industry. My prayers are with you! If there is anything my foundation can assist with, please do not hesitate to call me!
Bridgette Hester
Hubble Foundation
256-506-3354
Bridgette Hester
November 16, 2015
The broadcast tower industry has lost an icon and great engineer. Almost everyone in the business has probably crossed paths with Ernie at some point and we will all miss him. I'm glad we took a few minutes at the 2015 NAB show last spring to hang out and chat.
John McKay
October 29, 2015
We will miss Ernie, are thoughts and prayers are for Kathy and all of Ernie's family. I was blessed to be able to working with Ernie for several years helping him learn horsemanship, ranch roping and cattle working skills. A few years later Kathy, Tom and Sally joined us and it was always a great time to work with the group.
Ernie you will be missed by all who knew you. You were a Hand, when ever I throw my leg over my horse and shake Out a loop, my thoughts will be Ernie this catch is for you my friend!
Bob King
Bob King
October 28, 2015
We have the greatest respect for Ernie. He was a compassionate person and a straight shooter, and we will miss him. Our deepest condolences to Kathy and the Jones Family.
Dave Waltz
October 28, 2015
Ernie and I shared the same first name and middle initial. I would call him and say "this is the Other Ernie". I am so honored to have known him. The world has lost a great human being and engineer. May God Bless his family in this terribly difficult time.
Ernie Hopseker
October 27, 2015
Even though Ernie worked for my company's "competitor" for many years, you wouldn't know it when we met. Whether it was at the annual (or semi-annual in they heyday) meeting of TIA-222 or elsewhere, he would always greet me as a friend even though I had done nothing to deserve it. He will be sorely missed in the broadcast industry. My condolences to his closest friends and family.
Adam Jones
October 27, 2015
My thoughts and prayers are with Kathy and all the Jones family at this time of great sorrow. Ernie was a pillar of the tower engineering and safety community and will be missed more than words can offer. Ernie's tireless efforts for the benefit of others will be a lasting legacy.
Don Doty
October 27, 2015
Ernie was one of the "good guys". Whenever I would see him which could be in any state of the union, he would greet me with a friendly face and a soft spoken voice. The world is a better place since he was here. He will be greatly missed by all of us that knew him.
Mike Parrish
October 27, 2015
Mike Drake
October 27, 2015
Mark & I send our most sincere thoughts and prayers to Ernie's family. We met Ernie 10 years ago when he came here to ride & rope with Bob King. And we met Kathy in 2007 for the Spring branding at the Gordon Family Ranch in Nebraska. What a great couple they made. Happy Trails Ernie, we'll be roping with you again some day!
Cheryl Lieurance
October 27, 2015
I have known Ernie professionally for a lot of years and I will say he is truly an icon in the industry and will be greatly missed. I have no doubt that there are families out there that still have their loved ones because of his contributions. Thoughts and prayers to the family.
Carl Lampley
October 26, 2015
My deepest condolences to the family and friends of Ernie. He was a pioneer in the industry and made it a better and safer place for many people. He was a great man and will be missed by many.

Michael Fergus
October 26, 2015
Thoughts and prayers for all of Ernie's family. It is still so hard to wrap my head around this tragedy. Wondering why one family has to suffer from so many tragic accidents?
Aunt June was correct when she told me that Ernie's wife, Kathy, was their angel. May all of your wonderful memories of Ernie help you find comfort in the days ahead.
Cousin Cathie Griffith Jones
October 26, 2015
How deeply saddened I am to hear of Ernie's passing, having known him professionally for over 20 years. Ernie was a gentle man and an important and integral part of the telecom industry and we owe him greatly. His desire to share his knowledge of engineering benefited all.

My thoughts and prayers are with his family and friends.
Mark Malouf
October 26, 2015
My deepest sympathy to Ernie's family, friends and most of all his co-workers. I was blessed to have worked with him at ERI and he was a true gentleman and dedicated to his work. May his legacy, love and big ole grin continue with his children and grandchildren. Prayers and thoughts for everyone during this difficult time.
Beth Seaton
October 26, 2015
I was greatly saddened by the news of Ernie's passing. My deepest condolences to the family, co-workers and the many friends across the nation who are all mourning the loss of a great man.

Scott Clifton - WLS Radio Chicago
October 26, 2015
It has been an honor and a privilege to have known and associated with man of Ernie Jones integrity and professionalism. Your will be truly missed in the industry and as a friend.

God Bless
Bill Allen
October 26, 2015
Ernie was a colleague as well as a friend, honest and good at what he did. He will be missed.
My condolences to the family.
Roger Hatfield
October 26, 2015
Ernie was a great friend and leader. I had the privilege of working with Ernie for over 30 years. His passion for hard work and making things better was contagious. He brought a sense of calmness to all involved working through difficult problems. Everyone always listened to Ernie as he shared what he had learned from his wide range of experiences. And he did this with a special respective humor that I know all that have worked with him will always remember.

Thoughts and prayers to his family and friends.
Dave Brinker
October 26, 2015
We have lost our good friend and colleague.
Thank you for your unselfish dedication to the industry and your unique expertise. We will all miss being in your company and the honor of working alongside of you.

The Engineers of the CBS Television Stations Group
CBS Engineers
October 26, 2015
So long buddy, sure going to miss you.
Jim Walker
October 26, 2015
I only knew Ernie professionally, but he was the best I ever knew. My deepest sympathy to his family for their loss.
David Kasperek
October 26, 2015
Ernie- One of the finest persons I have ever known. Over a lifetime you only meet a few people that you can say that about. As so many others have expressed he truly was a one of a kind...the best. I feel privileged to have known him and hopefully in some way I can pass along just a tiny part of the huge Legacy he leaves.
Curt Wilkinson
October 26, 2015
patty davis
October 26, 2015
I performed my first tower analysis back in 1997 and sent it to my client where it later ended up in Ernie's hands for an independent review. Ernie called me to go through the analysis and instead of criticizing me for any mistakes I made he worked through them with me. He didn't know me and we worked for different companies so he could have easily contacted my client and made me look bad, but instead we went through the issues and I resubmitted the report. Ernie probably didn't even remember this interaction with me because it was his nature to do the right thing, but it made a huge impact on me and my career. I have since analyzed thousands of towers and built and engineering firm from 2 people to 200 people. I credit Ernie for helping me achieve success in my career. I will keep his family in my thoughts and prayers.
Chad Tuttle
October 25, 2015
A great guy who never worried about getting his hands dirty. The industry has lost a major player.
My condolences to the family.
Bob Guill
Bob Guill
October 25, 2015
Praying for the family, and all of Ernie's friends. May you find comfort in the wonderful memories of this great man's life. God bless you all.
Shaun and Shannon Bradley
October 25, 2015
Ernie was a real class act. He was my friend for 27 years and was respected due to his character that he lived by example. He will be greatly missed by all.
Praying for the entire Jones family.
Brian McKee
October 25, 2015
Ernie was the consummate engineer, gentleman and friend. Ernie bettered my life by being my friend and fellow engineer.
Bill Cordell
October 25, 2015
Ernie was my boss at ERI for 10 years. He was an unbelievable man of character and integrity. I will always remember him for showing us what work ethic was. I am just heartbroken for his family. What a loss.
Carol Van Winkle
October 25, 2015
God blessed this Genuine Man's Man ... a Man of Honor, Diligence and Humility ... I'm so pleased to have personally spent a few gloriously memorable occasions with EJ ... Your Memories are Carved in Indiana Limestone. God's Speed to your Wonderful Family.
in Zax, Brother John '81
TK 918
John Pfeifer
October 25, 2015 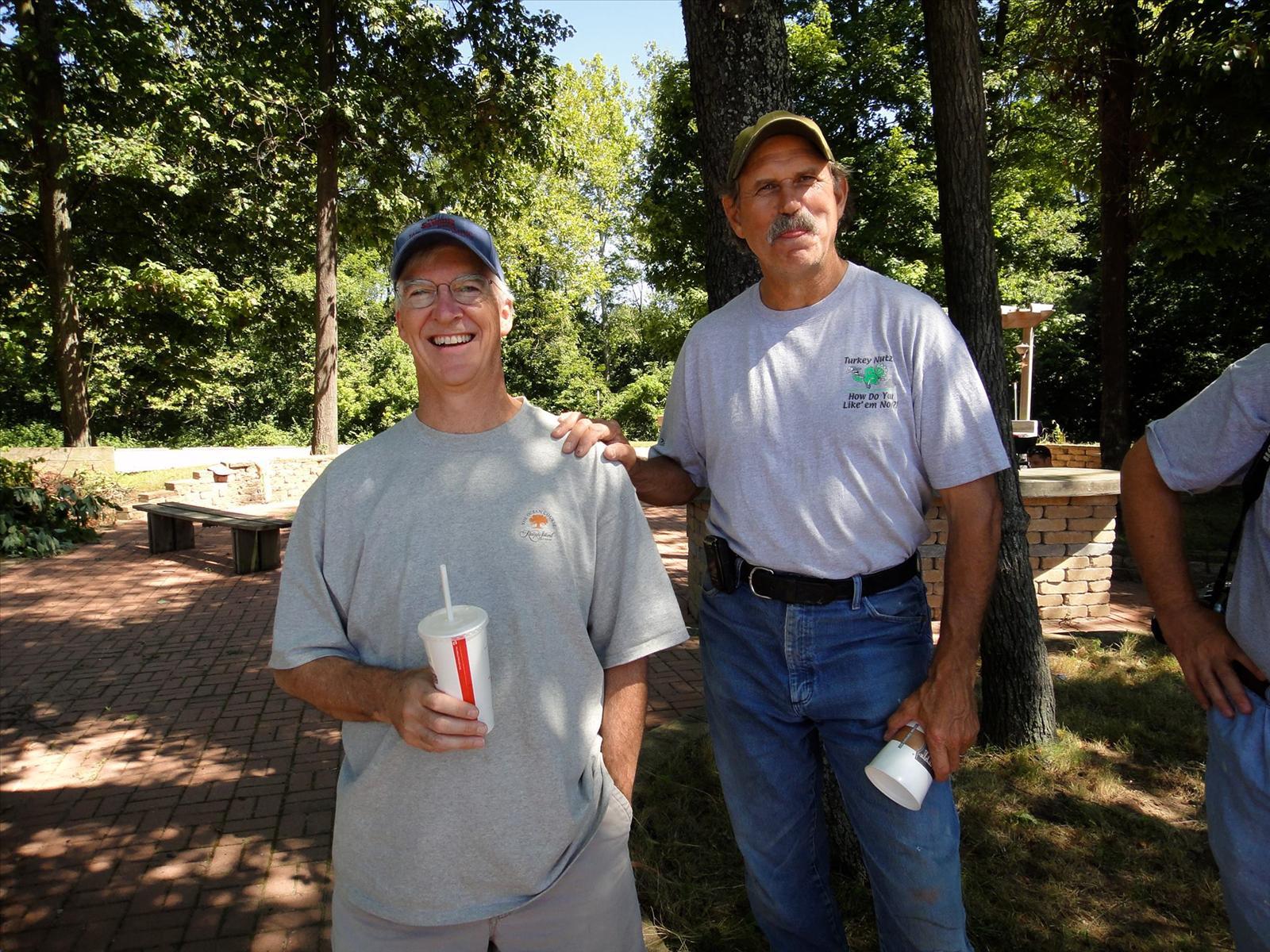 Ernie was my Lambda Chi Alpha brother at Rose Hulman. We graduated in 1973.
Ernie was such a great person in so many ways. Such a great brother. He'd do anything for you. Awarded the Best Rose Athlete Award in 1973. But being the best athlete is not what he is best known for, it was his wisdom, humility, integrity, his looking you in the eye and REALLY listening to you. Ernie put you first. He was a great leader. He simply made everyone he touched a better person by his words and example. He was a magnet, everyone wanted to be with Ern.
I know I'm a better man today from having the opportunity to live with EJ those Rose years. God bless you Ernie!
Please pray for Ernie and his wife Kathy and family.
Bill Thaler
October 25, 2015
Went all thru school with Ernie, he was always a good guy and a good friend, Thoughts and prayers to the family.
Mary Jane English Tilton
October 25, 2015
Showing 1 - 34 of 34 results