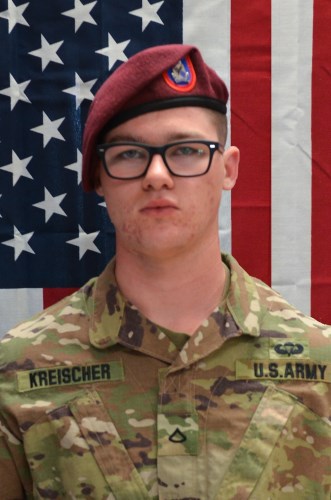 BORN
1999
DIED
2019
FUNERAL HOME
Krill Funeral Service
860 W Mulberry St
Bryan, OH
STRYKER - Pfc. Brandon Jay Kreischer died Monday, July 29, 2019, during combat operations conducted in Kandahar Province, Afghanistan.
Brandon was a 2018 graduate of Bryan High School, Bryan, Ohio, where he participated in choir, Light Shine Singers, wrestling, football and track. He was an avid weightlifter and enjoyed working out, going to movies, music, reading and Wednesday night youth group at Bryan First Church of Christ. He achieved his lifelong goal of joining the Army on April 25, 2017. He did his basic training as an infantryman and later airborne school at Fort Benning, Georgia, becoming a paratrooper assigned to the 82nd Airborne stationed at Fort Bragg, North Carolina, prior to his deployment.
Brandon is survived by his wife, Grace Aubrey Kreischer, whom he married on January 28, 2019, in Fayetteville, North Carolina, and his unborn son, Callum, expected in December. Also surviving are his parents, Brianne (Jason) Barlow of Stryker; his siblings, Sage (Mercedez) Saladin-Barlow of Edgerton, Ohio, and Rylan Garza of Bryan; his grandparents, Carrie Cook of Bryan, Jim and Lisa Esterline of Montpelier, Ohio, Cindy Krass of Stryker, and Mike and Wanda Barlow of New Haven, Indiana; numerous aunts, uncles and cousins, including a special aunt and uncle, Angie and Ray Pelland of Stryker; and his beloved harnessed cat, Gunther. He was preceded in death by his grandparents, Bill and Sharon Staniski and John Kreischer Jr.
Visitation will be held Friday, August 9, 2019, from 3-8 p.m. in the Bryan High School gymnasium, Bryan. Services will be held Saturday, August 10, 2019, at 11 a.m. in the Bryan High School gymnasium, with Pastor Brock Rohrer officiating. Private interment will follow in Evansport Cemetery, with graveside military rites conducted by the United States Army 82nd Airborne Honor Guard.
Memorials are requested to Brandon Kreischer Memorial to benefit Grace and Callum Kreischer, established at F&M Bank. Deposits may be made at any F&M Bank branch or mailed to P.O. Box 216, Archbold, Ohio 43502.
Krill Funeral Service, 860 West Mulberry Street, Bryan, Ohio, has been entrusted with arrangements.
To sign the online register or send condolences, please visit www.krillfuneralservice.com.

To plant trees in memory, please visit our Sympathy Store.
Published by The Crescent-News from Aug. 7 to Aug. 8, 2019.
MEMORIAL EVENTS
Aug
9
Visitation
3:00p.m. - 8:00p.m.
the Bryan High School gymnasium
, Bryan, OH
Aug
10
Service
11:00a.m.
the Bryan High School gymnasium
, OH
Funeral services provided by:
Krill Funeral Service
MAKE A DONATION
MEMORIES & CONDOLENCES
Sponsored by Krill Funeral Service.
21 Entries
Grace: My condolences to you, Callum and your Family on your loss. As a former Paratrooper with the 82nd, it always pains me to read of these tragic events. May God Bless you during these trying times may Ge extend His Mercies to you all.Bob Brewster82nd Airborne 1971-1972
Bob Brewster
August 28, 2019
You don't know me and I don't know you. However, you gave the ultimate sacrifice for people you'll never meet nor you'll never know. GOD BLESS YOU and your family. Praying for peace and blessings to your family.
Frankie Satterfield
August 13, 2019
I did not know you personally, but wanted to thank you for your brave sacrifice for your country. Rest in Glory.
Suzi Bowman
August 12, 2019
Thank you for your service and sacrifice Brandon. Keeping your family and friends in our prayers.
Martinez Family
August 12, 2019
I am an Army mother and truly wished I could have attended the services and pay my respects, but unfortunately I was unable to attend. God had instilled the courage, strength, and willingness needed to defend this country in Brandon at such a young age. His dedication to our country, our freedoms, and its people are appreciated and will never be forgotten. Please know there are many heartfelt prayers being said for your family.

May God bless you during this very sad time.

Fran Enochs
August 12, 2019
Thank you for your service PFC. Brandon Jay Kreisler. Prayers for your family. RIP Sir.
Valli Owens
August 12, 2019
RIP Fellow Soldier. To the family, my sincere condolences. God Speed.
SFC (Retired) Alvin Jones
August 12, 2019
Thank you for your service to the United States of America.
Faith Vinson
August 12, 2019
I'm so sorry for the loss of your loved one. I didnt know Brandon but I read about his sacrifice and service to our country and I would just like to honor him by saying "thank you for your service". May the Good Lord comfort all of the family, friends, and those who served with Brandon.
Sincerely,
Felita Kilday Greeneville Tn
Felita Kilday
August 11, 2019
At Ease, Soldier.
A Fellow Infantryman
August 11, 2019
Thank you for the ultimate sacrifice in your service to our country and all of us. I do not know you, but thank you is truly not enough. You and the family you left behind will remain in my prayers. May you Rest In Peace and may perpetual light shine upon you. May God give your family comfort.
A grateful citizen
August 11, 2019
May God hold Brandon's family and friends in the palm of his hand as they deal with the grief and may memories sustain them throughout this time and in the future. God Bless Each Of You. Sincerely,
Geri Martorano
August 11, 2019
My family offers our most sincere condolences to the entire Kreischer family. While we did not know Brandon, it is clear that he served his country with bravery and devotion. We are so grateful for his service and sacrifice and we mourn with you at his loss. Our prayers are with you during this difficult time. May the Lord comfort you and give you peace.
Ann Wilkinson
August 11, 2019
With profound sadness and eternal gratitude.Frank T. Johnson Captain US ArmyViet Nam 1970-1971
August 11, 2019
My I offer my heartfelt condolences to the entire Kreischer family and friends.
PFC Brandon Kreischer is a true American Hero fighting the forces of evil, guarding our Country, and our way of life. Our flag does not fly because the wind moves it. It flies with the last breath of each American soldier who died protecting it.Our debt to these American Heroes in the Service of our Nation can never be repaid. They have giving the ultimate sacrifice and have earned our undying gratitude.
America will never forget your sacrifice, Rest in peace PFC. Brandon Kreischer!
U.S. ARMY Veteran
4th Div. 12th Inf.
Keith Kruse
Lady Lake FL.
August 10, 2019 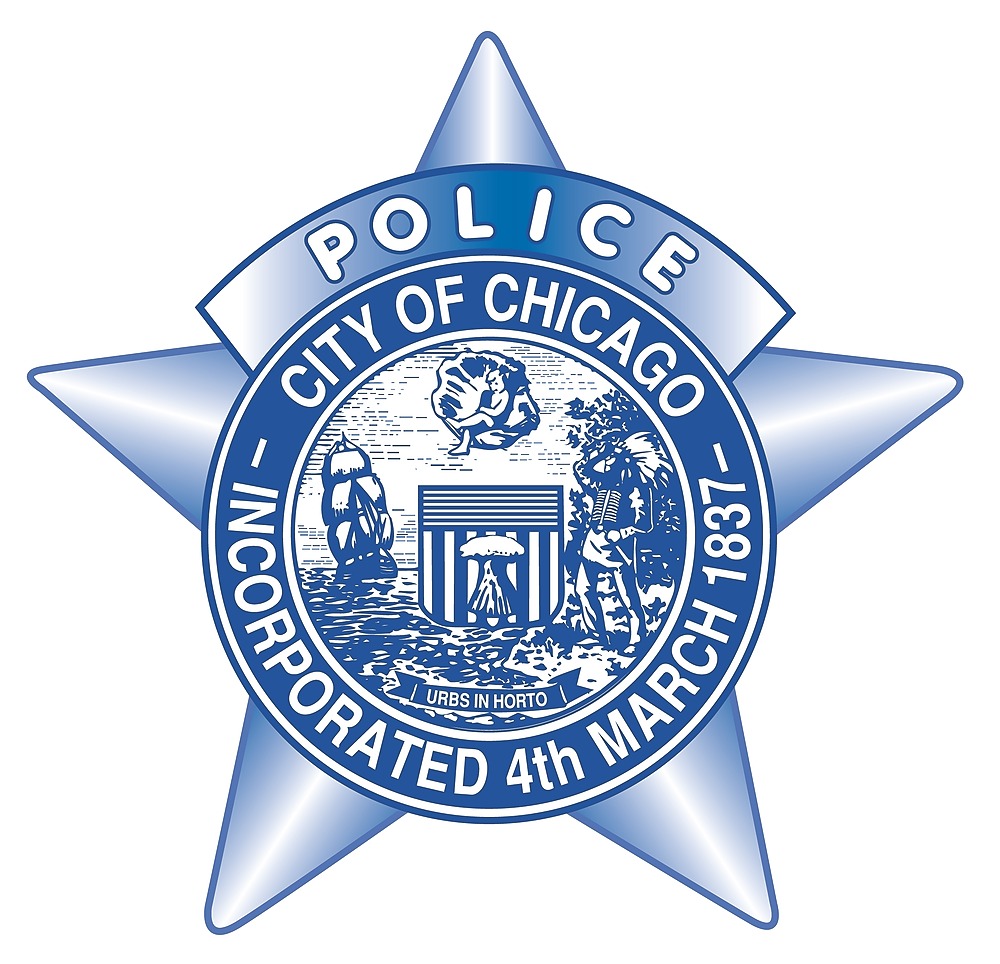 Heartfelt and prayerful condolences from the Chicago Police Chaplains. Brandon will be remembered at the Police Mass on Sunday, 11 AUG, 11:00 a.m. at Mercy Home - 1140 W. Jackson Blvd. In the meantime, may family and friends know the healing touch of our all-loving, all-merciful God! [Police Chaplains Ministry: www.ChicagoPCM.org or 312/738-7588]
~~ Fr. Dan Brandt, CPD Chaplain
August 10, 2019
You are an American hero. May God hold you close for the rest of eternity. I pray for your family to find peace and that your son grows up to know you are a hero. Your death is untimely but it is not for nothing. We are a great country because of heroes like you. Thank you for your service. And thank you for your sacrifice.
August 9, 2019
Thank you for your service to our country, bless
your family during this time.
Kenneth and Kay Donaldson
August 8, 2019
God Bless you, Brandon. I didn't know you, but I will not forget you. Heroes are to be remembered! Thank you for your service and sacrifice.
Dan Hall
August 8, 2019
Thank you for your service Brandon. Rest in eternal peace!
Brenda Riggenbach
August 8, 2019
I am sorry for your loss.
Debra Dunsford
August 7, 2019
Showing 1 - 21 of 21 results