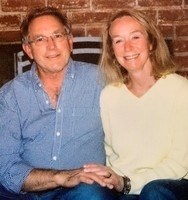 FUNERAL HOME
Brookings-Smith, Main Chapel
133 Center Street
Bangor, ME
Adele A. Factor
Adele A. Factor, 79, of Bangor, Maine, devoted wife of Dr. Don E. Factor for 57 beautiful years, moved forward into heaven with the eternal love and unending support of her family around her at her home on Friday, January 15, 2021. Born in Fairfield County, Connecticut, she was the daughter of the late Carl A. and Elizabeth G. Zelich. She was a devoted friend to so many and her help and compassion were bottomless.
A graduate of Lauralton Hall (Milford, Connecticut), and the University of Connecticut (Storrs), Mrs. Factor earned her Masters in Business Administration, Beta Gamma Sigma, from the University of Maine (Orono). A patient educator at her core, Dela tutored countless middle and high school students with special needs in both the public and private school systems. Dela also had a wide and deep knowledge about investing and used that when engaging herself in her faith, family, and husband's career. She was the "Knights of Columbus' biggest fan" and her children's proudest cheerleader. Dela joined Don at countless medical meetings throughout his accomplished career, and chaired many fundraisers for Northern Light Medical Center, previously known as Eastern Maine Medical Center. Her efforts with the Auxiliary To Penobscot County Medical Society resulted in the realization of Dr. Factor's vision and dream of bringing the first stereotactic breast biopsy unit to Bangor. Before settling in Maine and meticulously restoring their historic home to its original glory, Don and Dela lived in a dozen states over the course of their marriage. They enjoyed travelling internationally and researching the history of the places they visited. They maintained delightful friendships with many who attended the Austin Healey Club of North America Annual Conclave where, at the good-natured frustration of many members, the couple routinely won arduous international time-and-distance road rallies. Dela was an avid hiker and a member of the Penobscot Area Trekkers and Hikers (PATH) Club, a downhill skier logging many vertical miles on the slopes at Sugarloaf Mountain (Carrabasset Valley, Maine); and an accomplished golfer with a long-standing membership at the Penobscot Valley Country Club (Orono, Maine).
She was both an exceptional mother and the best mom a child could ever have. Survivors include her husband, Dr. Don E. Factor, of Bangor, Maine; one son, Kenneth P. Factor, of New Hampshire; two daughters, Elizabeth M. Williams and her husband, James P., Sr., of New Hampshire, and Catherine M. Russell, of Massachusetts; one brother, Carl A. Zelich, of Florida; one sister, Barbara M. Ferguson, of Connecticut; and seven grandchildren, Benjamin P. Factor, of Maine, James P. Williams, Jr., of New Hampshire, Douglas W. (Tripp) Russell, III, of Massachusetts, Grace E. M. Factor, of Maine, Kathryn E. Williams, of New Hampshire, Holly E. Russell, of Massachusetts, and Samuel E. Russell, of Massachusetts. The Factor family wishes to extend their sincerest thanks to all of the dedicated caregivers, hospice professionals, pharmacists, nurses and doctors at the Dana Farber Cancer Center and The Brigham and Women's Hospital (Boston, Massachusetts), and Northern Light Medical Center and The Cancer Center of Maine (Bangor, Maine) for their loving care of Mrs. Factor. Due to the COVID-19 pandemic and their mutual desire to remain together for eternity, a private family mass will be held at this time, and she will be publicly remembered in celebration with her husband when he joins her in heaven after which they will remain together in perpetuity at Arlington National Cemetery. An active and devoted Roman Catholic in her community, Dela found comfort and strength at the touch of her many rosaries and was committed to pro-life messaging and action. In lieu of flowers, friends who wish to make contributions are invited to donate to The Knights of Columbus, Pine Cone Council 114, P.O. Box 994, Bangor, Maine, 04401 with MEMO: PRO LIFE. Masses may be requested at the church of your choice, or at Saint John's Catholic Church, Saint Paul the Apostle Parish, 217 York Street, Bangor, Maine, 04401, (207) 217-6740.
Condolences to the family may be expressed at BrookingsSmith.com
Published by Connecticut Post on Jan. 21, 2021.
To plant trees in memory, please visit the Sympathy Store.
MEMORIAL EVENTS
To offer your sympathy during this difficult time, you can now have memorial trees planted in a National Forest in memory of your loved one.
Funeral services provided by:
Brookings-Smith, Main Chapel
MAKE A DONATION
MEMORIES & CONDOLENCES
Sponsored by Brookings-Smith, Main Chapel.
1 Entry
Cathy and family, thinking of you all. So sorry for your loss. What a beautiful picture and life story.
Maureen Studley
Friend
January 27, 2021
Showing 1 - 1 of 1 results