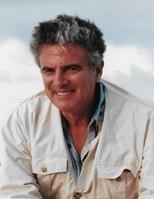 FUNERAL HOME
Harding Funeral Home
210 Post Road East
Westport, CT
Arnold Van Hoven Bernhard
Arnold Van Hoven Bernhard 1934-2018
Van Bernhard, age 83, of Westport, CT, beloved husband of Dianne Jones Bernhard, passed away on March 07, 2018.
Van was a longtime resident of Westport, Connecticut, a sculptor and pastel artist, philanthropist, financial analyst, and ecologist. He was the son of the late Arnold Bernhard and Janet Kinghorn Bernhard. Arnold Bernhard was the founder of Value Line Investment Survey.
Van was an alumnus of the Choate School, was enrolled in the ROTC and graduated as a biology major from Colby College of the class of 1957. Afterward, he was commissioned as a Lieutenant in the United States Air Force and served his active duty at Lakenheath, Suffolk, England. After his military service, Van worked at Value Line and was in the forefront of computerizing the company and family holding company, Arnold Bernhard & Co., Inc. In the 1960's he started Printing Services, Inc., a subsidiary, to computerize mailing lists and other printing services, later becoming Vice President of Value Line Securities as a securities analyst and served on the Board of Directors of both Value Line and Arnold Bernhard & Co., Inc. until 1995.
A passionate entrepreneur, Van was a founder of Hummingbird Farms, the hydroponic tomato farm in Maryland, a partner in Bernhard Link Theatrical Productions, a fashion and event production company in New York City, a partner in Bernhard Brown, a sound and light company in Texas, as well as a partner in Bernhard Thomas, a state of the art wall panel manufacturer in Connecticut.
In 1997, he donated to Quinnipiac University the Arnold Bernhard Library, naming it after his father, and endowed a professorship in economics and directorship for special education. At Colby College, he created and endowed the Arnold Bernhard professorship in Arts & Humanities, in honor of his father as well. He established the Draupner Ring Fund for teaching in Biology at Tufts University. He served on the Board of Trustees at the University of Bridgeport and was a Trustee Emeritus at Quinnipiac University. He was the lead donor in the realization of creating Coyle Gymnasium and a Science wing at Greens Farms Academy.
A practicing fine artist and staunch supporter of the arts, Van was a founder and producer of Bernhard Ballet. He had a one-man retrospective of his art at the Newington Cropsey Foundation in 2006 and was awarded Man of the Year in 2007. Van was a member of the University Club, the Explorers Club, the Pastel Society of America, the Portrait Society of America and The National Arts Club. He was a charter member of the Fairfield County Hunt Club and Aspetuck Valley Country Club. He was an avid historian and researcher of Viking history and Nordic mythology.
Van spent much of his time on Hummingbird Cay, his private island in the Exumas, Bahamas, where he maintained a tropical ecology field station for research, experiments, and study for Tufts University. At Christopher Newport University a credited study is offered yearly in Island Biology and Experimental Design at Hummingbird Cay. Van sponsored bonefish, stingray and lionfish research conducted by The Island School and Cape Eleuthera Institute on Hummingbird Cay. In partnership with Harbor Branch Oceanographic Institute at Florida Atlantic University, he originated a program and established a hatchery to restore queen conch populations to the Bahamas. Van fostered scientific research and coauthored published scientific papers on island ecology and marine habitats and left an indelible mark on countless students, professors, and visitors to Hummingbird Cay.
Van is survived by Dianne, his wife of twenty-seven years, and children Angela Bernhard Thomas, her husband Harold of Redding, CT, Jeffrey Barbee Bernhard of Weston, CT, and Leon, Nicaragua, Tiffany Hope Charles, her husband Shayne Anderson of Santa Monica, CA. His daughters from his previous marriage to Diane Ekholm Valante, Edith Bernhard van Harwegen den Breems of Westport, CT, and Ingrid Bernhard Gordon, her husband Richard of Westport, CT. He was a doting Papaw to his beloved grandchildren; Forrest, Isabelle, Lars and his wife Susan, Richie, Martin, Nielsen, Tyler, Audrey, and great-grandson Benjamin. He is survived by his twin sister Jean Bernhard Buttner, her children Marianne Buttner Asher and her husband David, their children Innes and Iona, Janet Buttner Eakman and her husband Gary, their children Nate and Allison, and Raluca Buttner, wife of Edgar "Ned" Buttner (predeceased) and their children Edgar, Grette and Mika. His first wife, Susan Grondona Dolge of New Canaan, CT. A loving extended family and a great number of wonderful friends and acquaintances.
A memorial service, with military honors, is to be announced at a later date by the family.
Contributions in memory of Van may be made to the Dianne and Van Bernhard Fund for research in the field of metabolic therapies for cancer at the George W. Yu Foundation for Nutrition and Health into the. www.Yufoundation.org.

Published by Westport-News & The Hour & Connecticut Post & Fairfield Citizen from Apr. 4 to Apr. 8, 2018.
To plant trees in memory, please visit the Sympathy Store.
MEMORIAL EVENTS
To offer your sympathy during this difficult time, you can now have memorial trees planted in a National Forest in memory of your loved one.
Funeral services provided by:
Harding Funeral Home
MAKE A DONATION
MEMORIES & CONDOLENCES
Sponsored by Dianne Bernhard.
11 Entries
We loved him---a great man and a great friend. He made an impact on those he touched.
Skip & Joan Tolette
Friend
March 29, 2020
Chris and Jenny Kettel send their sincere sympathy and also from The Exuma Foundation. Van was a great guy who did much to help this island.

[email protected]
May 7, 2018
I will remember him at the sight of every majestic sunrise upon the horizon and beyond the sea....with its soft, varied hues of pink .....simply regal....like the man himself........
Rest In Peace Mr. Bernhard.
Rita (Rita Moreno) Hassan
April 27, 2018
Van, thank you for your friendship.-Mary Cava
April 17, 2018
Van was a very kind and loving person, made you feel like he had been your friend forever! God Bless his precious family!
Peggy Hannsz
April 12, 2018
Deeply sorry for you great loss, When anxieties overwhelmed you, God comforted and soothed you
Ps. 94:19.
CB
April 7, 2018

Mr. Bernhard was a genuine person and had a positive impact on my life that I will never forget. He will be truly missed.
Darrick Lin
April 7, 2018
We all loved him--such a kind and gentle man.

Memories: We met at Colby 62 years ago----he flew Joan to one of our away varsity soccer games. Another time he flew me to see if we needed to bring snowshoes for an Appalachian Trail Spring maintenance trip on the Barren-Chairback Range in Maine. Canoe trips and climbing Mt. Katahdin with the Outing Club. Fast forward to being with Van and Dianne at the Colby Inaugural of the Arnold Bernhard Professorship in Arts and Humanities with five of Van's buddies in 2005. Stay strong as Van would want you to. Blessings to Dianne and the family. Special regards to Jeff.

Joan & Skip Tolette
April 6, 2018
Extending condolences for your loss. May the peace of God comfort you during this difficult time.
April 5, 2018
Strength, Love, Peace and Compassion.
John Rodriguez
April 4, 2018
Rest in peace Mr. B. My sincere condolences and prayers to an incredible and most wonderful family. An honor.