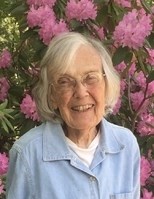 FUNERAL HOME
Tighe-Hamilton Funeral Home
50 Central Street
Hudson, MA
Elizabeth Clifford Clark
October 4, 2021
Elizabeth (Betty) Mabel Clifford Clark, age 96 of Hudson, MA entered peaceful eternal rest on October 4, 2021. She was predeceased by her husband Sheldon H. Clark and her brother Arthur Charles Clifford. She was the daughter of Arthur and Mabel Brough Clifford. Betty was born and raised in Bridgeport and lived in Stratford for 34 years, later relocating to Hudson, MA. She is survived by her 4 children and their spouses; Charles Clark, Maria Arista (wife) of Canaan, NH, Marie Clark Jeffrey, Tom Jeffrey (husband) of Sudbury, MA, William Clark, Nancy Killian (wife) of Westminster, MA, and Jonathan Clark, Pamela Earle (wife) of Sterling, MA. 4 grandchildren; Lillian (Clark) Jeznach, Steven Clark, Gordon Clark, Emma Clark; 2 great-grandchildren; Mabel and Everett Jeznach.
Betty attended Beardsley School, Warren Harding High school, Eastman School of Music (B.S.) and Syracuse University. She worked at Peoples Savings Bank in Bridgeport, Sage Allen Department store in Trumbull and served as a teacher aide for the Stratford public school system. She was an active member of the First Congregational Church in Stratford and later St. Luke's Episcopal Church in Hudson MA. Betty was an accomplished musician who, in the 1940's, led an all-female "big band" and continued to play music throughout her life. She always enjoyed sewing, knitting and crafts, passing these skills down to her daughter Marie. Betty was an active woman who loved her walks and the companionship of her dogs. Her greatest joy was being surrounded by the company of her family and friends at gatherings. A private burial was held at Lakeview Cemetery, Bridgeport, CT. Tighe-Hamilton Regional Funeral Home, Hudson, MA assisted with funeral arrangements.
Published by Connecticut Post on Oct. 11, 2021.
To plant trees in memory, please visit the Sympathy Store.
MEMORIAL EVENTS
To offer your sympathy during this difficult time, you can now have memorial trees planted in a National Forest in memory of your loved one.
Funeral services provided by:
Tighe-Hamilton Funeral Home
MAKE A DONATION
MEMORIES & CONDOLENCES
Sponsored by Tighe-Hamilton Funeral Home.
2 Entries
I am very saddened to hear of the passing of a dear friend and a beautiful lady. Betty was always an inspiration to many. She was always in a good mood and always pleasant. I will always remember our good times and conversations together. My deepest sympathies to her family that she loved so much.
Norman Wittkofske
Friend
October 14, 2021
How very sorry I am to read of your mother´s passing.I had the pleasure of getting to know her when your father and I were teaching partners in Stratford.She was a lovely woman.I am also saddened to see Sheldon has passed.My sympathy goes out to all of you.
Janet Geary Haffner
School
October 11, 2021
Showing 1 - 2 of 2 results