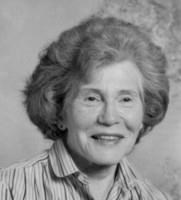 BORN
1923
DIED
2018
Evelyn Zolan
Evelyn Hyman Zolan died August 16, at IU Health Bloomington Hospice House. She is survived by her children, Paul Zolan (Kate Steinway) and Mimi Zolan (Jeff Palmer); her brother, Leon I. Hyman (Frances Hyman); four grandchildren, Sarah Zolan (Sue Spang), Alex Zolan (Amanda Zolan), Nick Palmer, and Mike Palmer; and three great grandchildren. She was predeceased by her son, Eric William Zolan, who died in 1974 while serving in the US Army; by her husband, Aaron Louis Zolan; by a sister, Shirley Kleinman; and by a half-sister, Hannah Langel.
Evelyn was born October 24, 1923, in Bridgeport, CT, to Wolf and Fanny Hyman. Her father was a pharmacist, and the family lived above their drug store, where the children worked from an early age. Evelyn graduated from Central High School in Bridgeport, winning the Hallen Prize for English. She received an Associate's Degree in the Arts at the Junior College of Connecticut and earned her BA in Psychology from the University of Chicago in 1944. After college she went home to Bridgeport to care for her mother and worked as the director of youth activities at the local Jewish Community Center.
Evelyn married Louis Zolan on August 31, 1947. In 1951 they moved to Fairfield, CT, where they raised their three children. Evelyn had always wanted to be a teacher and work with children. She was therefore honored to be accepted into the prestigious Yale Fairfield program, through which she earned her MA and her credential in teaching in 1958. She taught second grade and then first grade (her real love) at Oldfield School in Fairfield, CT, from 1961 until her retirement in 1980. She then enjoyed volunteering as a docent at the Bridgeport Museum of Art, Science, and Industry.
In 1981 Evelyn and Louis started their tour of college communities by moving to Durham, NC, where they were active participants in Duke's Learning in Retirement program. Evelyn also taught remedial reading in the Durham County School System, volunteered at Duke Hospital, and tutored English to Japanese friends. While in North Carolina, Evelyn and Louis welcomed their first grandchildren, Sarah and Alex. In 1986 Evelyn and Louis moved to Ann Arbor, MI, where Evelyn enjoyed the Women's City Club, the local chapter of the American Association of University Women, and volunteer work for International Neighbors. Evelyn and Louis were also devoted participants in study groups in the classics, mythology, and current events.
In 1996 Evelyn and Louis moved to Bloomington, Indiana to be near Mimi and her family. Evelyn thrived in being an on-the-spot grandma to Nick and Mike and stayed involved in all of their activities. She also greatly enjoyed continuing visits
to and from her son Paul and his family. Evelyn immersed herself in Bloomington life, becoming an active member of Altrusa (a service organization) and the Red Hatters (a social organization). She enjoyed spending time, involving much bridge and many parties, with her numerous wonderful and close friends. Lifelong opera fans, Evelyn and Mimi spent many happy afternoons at HD broadcasts from the Metropolitan Opera and many happy evenings at IU Opera and Ballet productions. She also enjoyed the lovely gardens that Jeff planted and maintained at her home.
Evelyn loved children, literature, opera, ballet, and ballroom dancing. She was also a published poet. She enjoyed wonderful relationships with numerous devoted students, including, most recently, students from the IU School of Nursing who served as aides during the last years of her life. Memorial contributions in her honor may be made to the Friends of the Monroe County Public Library for fiction or children's books, or to the IU Jacobs School of Music. Burial and a family memorial will be held in Fairfield, CT, in the fall.
Published by Connecticut Post on Aug. 19, 2018.
To plant trees in memory, please visit the Sympathy Store.
MEMORIAL EVENTS
To offer your sympathy during this difficult time, you can now have memorial trees planted in a National Forest in memory of your loved one.
MAKE A DONATION
MEMORIES & CONDOLENCES
4 Entries
Mrs. Zolan was my first grade teacher st Oldfield. She was a wonderful teacher!
Patti Woods
August 23, 2018
she taught my daughter Nancy at Oldfield school in Fairfield. what a wonderful teacher
annette santini
August 22, 2018
Sending loving thoughts to my second grade teacher! Rest in Peace, Mrs. Zolan!
Roxanne (Hart) Ruane
August 22, 2018
I taught in Oldfield School for a few years while Evelyn was also teaching there. I found her to be a lovely, sensitive and caring woman and a skilled and dedicated teacher. My condolences to her loved ones. Rest in peace, Evelyn. The world is a better place because of your presence here. You will be very much missed.
Paula Sweeley
August 19, 2018
Showing 1 - 4 of 4 results