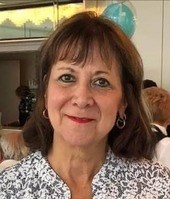 BORN
1950
DIED
2021
FUNERAL HOME
Baldwin Brothers Funeral & Cremation - Port Orange
620 Dunlawton Ave
Port Orange, FL
Joan K. "Gio" Iannotti
1950 ~ 2021
Joan Karen Iannotti, "Gio," 70, of Port Orange, Florida, passed from this earth at 7:36 a.m. on September 9th, 2021, in Daytona Beach, with her son, Robert, by her side.
Born on December 6th, 1950 in Bridgeport, CT, to parents Vincent and Carolyn Iannotti, a tool and dye maker, and a nurse, respectively, "Gio," a nickname given to her by her father's father, Giuseppe, was an only child, but had many cousins throughout Connecticut and Italy. Gio attended St. Joseph's Catholic High School in Trumbull, CT, where she accumulated many close childhood friends who served as de facto "aunts," and their children de facto cousins, to her Irish-twin sons, Bobby and Ricky, born 13 months apart. Joan attended Annhurst College in Woodstock, CT for her undergrad, where she accumulated more lifelong friends. She studied English Literature for a semester at the University of Oxford in England, then earned a Masters in Finance at the University of Bridgeport. Joan married her soul mate, Robert Peter Piccirillo, at St. Theresa's Church in Trumbull, CT, in 1978. Shortly after getting married, Bob and Joan immigrated to St. Petersburg, Florida, where Joan began her career in finance working for a company called E-Systems, becoming its first female executive. E-Systems, Inc., a military defense contractor, which built top-secret spying equipment and other advanced electronic gear, was eventually acquired by Raytheon. Joan loved going to the beach, boating, and bike riding. But what she really loved to do was write. Joan re-adopted her childhood nickname, "Gio," repurposing it for her pen name, under which she published several novels, "Triangle", "Act of Contrition," and an edited edition of her father-in-law's book, "Beggarman Thief." Joan retired from Raytheon in 2014, relocating several times between Florida and Connecticut, before finally settling down in Port Orange, close to where some of her childhood girlfriends from Connecticut had decided to settle in Florida, as well. Unfortunately, cancer took her before she was able to enjoy writing in her new house, which is located in a wonderful neighborhood and has a white picket fence.
Joan is survived by her two sons, Robert Vincent Piccirillo, of West Palm Beach, Florida, and Richard Frank Piccirillo, of Port Orange, Florida, respectively. She is also survived by many cousins throughout Connecticut, her godson, Marc Wysocki, of Jacksonville, FL, as well as her cugini, Lorenzo Conte, of Ajax, Ontario, Canada, and Giuseppina Conte, of Cerreto Sannita, Italia. She is also survived by her many lifelong friends who became de facto sisters, Marie Zyskowski, of Shelton, CT, Eileen Lowe, of Port Orange, FL, Tina Riccio, also of Port Orange, FL, Lucile King, of St Petersburg, FL, and many others, too many to list. And, her most recent dog rescue, Buddy.
Joan was preceded in death by her soul mate, Robert P. Piccirillo, her brothers-in-law, Ricky and Billy, and all of the mutts she loved along the way, Jason, Tiki, Layla, Enzo, Peggy Sue.
Joan's funeral will be held on Friday, September 24th 2021, at 11:00 a.m., at St Theresa's Catholic Church, the same church where she married Bob. She will be interned with her parents, Vinny and Carolyn, and her soul mate, Bob, in the Iannotti Family Plot, at Gate Of Heaven Cemetery, in Trumbull, CT, following the service. Please join the family afterwards at Vazzy's in Bridgeport for drinks and food and good times.
Joan was the absolute embodiment of "The Giving Tree," and sometimes she cared more about others than herself, especially in regards to her sons. She has left a hole in so many hearts that can never be filled! And, she will be truly missed.
R.I.P. Joan Karen Iannotti; December 6th, 1950 - September 9th, 2021.
Published by Connecticut Post on Sep. 21, 2021.
To plant trees in memory, please visit the Sympathy Store.
MEMORIAL EVENTS
Sep
24
Funeral
11:00a.m.
St Theresa's Catholic Church
FL
Funeral services provided by:
Baldwin Brothers Funeral & Cremation - Port Orange
MAKE A DONATION
MEMORIES & CONDOLENCES
Sponsored by Baldwin Brothers Funeral & Cremation - Port Orange.
5 Entries
I have such sweet memories of us when we were little children playing together. I am sure you had a great reception in heaven where you were rejoined with all of our relatives for eternal life in heaven. You came from Love, you are Love, and you have returned to Love. Much love to you my dear cousin Joanie.
Donna Carbone Lichtenfeld
Family
September 30, 2021
My condolences to Joan's sons. I was sorry to see the news of Joan's passing. Although we never knew each other well, Facebook allowed us to have some connection to each other. May she rest peacefully.
Sandra Iannotti
Family
September 28, 2021
Joan was a great co-worker and friend, bright as a star. I also enjoyed her books after her retirement. She was one of a kind! RIP
Jim Newman
Work
September 24, 2021
Joan: You were truly an asset to my world. I loved you with all my heart. I will miss you dearly. It hurts me deeply that we can't talk and visit each other any more. You were the most: loving ,caring,considerate,generous and strong willed person I ever met. My heart is full of sadness now you are gone but the memories will always linger on. You were truly my BFF. You were always there when I needed you and I was always there for you. I am so glad you are no longer suffering and you can now rest peacefully with you love ones.
Eileen Lowe
September 23, 2021
Joan was a great lady. I was privelged to know her when we both worked at Raytheon. May her memory be eternal
Eli Dalabakis
Work
September 22, 2021
Showing 1 - 5 of 5 results