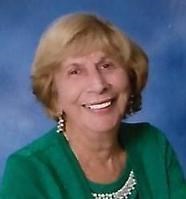 BORN
1924
DIED
2018
Lorraine Theresa Brodsky
Lorraine Theresa (Betchley) Brodsky, age 94, joined her Lord on November 15th, 2018. Lorraine was born on the very fitting date of February 29, 1924 in Brooklyn, NY. This birth date appointed her the unique status of being a leap year baby and, apparently, aging very, very slowly. This birth date is also very symbolic: Lorraine took pride in leaping her way through life – from dance studios, musicals, and class rooms; through her many travels, and long into retirement.
As a teenager she joined Dance Teachers of America in New York and enjoyed watching musical rehearsals. Later she enrolled in New York University to take various dance courses and taught ballroom dancing to grade school children. After moving to Milford, she opened 'Ms. Lorraine's Dance Studio'.
Lorraine earned degrees in health, physical education, and special education. She taught elementary school in Milford and Fairfield CT where she integrated musicals in the class room to facilitate her students' language skills development – a technique that to this day is considered efficient and effective. She was so loved by her students that they skipped recess to rehearse the musicals with her. Her name even appears in the 1972 edition of Outstanding Elementary Teachers of America.
Lorraine leapt into the arms of war veteran Ed Brodsky Jr., married on December 19th, 1945 and had two children: Terry and Edward. In her retirement, Lorraine balanced part-time supervision in an academic program with travels. She and Ed visited all 50 states (the contiguous 48 all in their motorhome) and took quite the number of photos to prove it. They moved to Nettles Island, Florida - first during the winter months and then as full-time residents. After Ed's passing in January 2006, Lorraine decided to slow down. How? She attended yoga classes with students half her age, and choreographed line dancing routines into her early 90s.
Lorraine is survived by her daughter Terry (Brodsky) Lucash of Marlborough, MA and daughter-in-law Sarah Brodsky of Southbury, CT; grandson Richard Brodsky, Sharon Garrett, and great-granddaughter Lila of Seattle, WA; grandson Eric Brodsky of Lynnwood, WA; granddaughter Perrin (Lucash) Ventress, Zachariah Ventress, and great-grandchildren Ian, Aiden, and Sophie of Wayland, MA; grandson Garrett Lucash, Yumiko Murai, and great-grandchildren Kellen and Aila of Wayland, MA.
She was preceded in death by both of her parents, her husband Edward Brodsky Jr., her son Edward William Brodsky, her son-in-law Stanley Michael Lucash, and grandson Neal Brodsky.
Lorraine will be deeply missed, and it is hard to believe that she will leap no more.
Published by Connecticut Post on Jan. 13, 2019.
To plant trees in memory, please visit the Sympathy Store.
MEMORIAL EVENTS
To offer your sympathy during this difficult time, you can now have memorial trees planted in a National Forest in memory of your loved one.
MAKE A DONATION
MEMORIES & CONDOLENCES
3 Entries
I am so very sorry for your loss. May the God of comfort be with you in your time of need.
MT
January 18, 2019
Terry, I am so sorry for the loss of your wonderful mom. Dancing lessons with her were like a dream come true for me as a child. I fantasized about being a ballerina for years. She inspired me for much of my life as I continued on in many kinds of dance into adulthood. She was a wonderful, patient, and loving woman. You and your family are in my prayers.
Barbara Smith Gosse
January 14, 2019
Lorraine and Ed were great neighbors in Fairfield. Lorraine was wonderful lady and neighbor. She has truly earned her wings.
Patti Morken
January 14, 2019
Showing 1 - 3 of 3 results