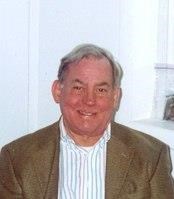 FUNERAL HOME
Spear-Miller Funeral Home
39 South Benson Road
Fairfield, CT
Peter S. Swann
Peter Stuart Swann, age 83, of Westport, beloved husband of 52 years of Patria (Lynk) Swann, passed away peacefully with Patria by his side in the early hours of Thursday, April 15, 2021. Born in New York City, the son of the late Charles Bennett Swann and Evelyn Henry Swann, he had been a Westport resident since 1972. He attended the University of Colorado and served in the United States Navy. Mr. Swann enjoyed a long and rewarding career in the newspaper representative business, retiring as Director of Research for the Papert Company. He was member and former President of the Media Research Directors Association. Peter was an active Westport community volunteer. He served as Treasurer for Save Westport Now and Friends of the Westport Library. In 1998 he served as Treasurer of the "River of Names" mural fundraiser during the major renovation of the Westport Public Library. For many years he performed patient outreach for Trinity Episcopal Church of Southport, playing piano for the patients at the Ludlow Health Center in Fairfield. In addition to his loving and devoted wife, Patria, he is survived by a brother, Sherwood Lee Swann and his wife Mary of Newport, NC; a dear cousin, Lawrence Tuttle and his wife Betsy of Munson, MA; two nieces and a nephew. A graveside service will be held Friday, April 30, 2021 at 11:00 a.m. at Willowbrook Cemetery 395 Main Street, Westport with the Rev. Peggy Hodgkins officiating. In lieu of flowers, friends may consider a donation in Peter's memory to Trinity Episcopal Church, 651 Pequot Avenue, Southport, CT 06890. For information or to offer an online condolence please visit www.SpearFuneralHome.com