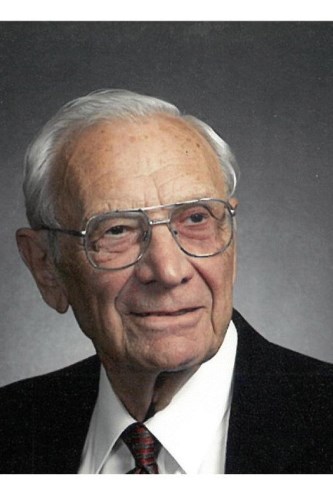 George L. Ebener, age 98, passed away on Monday, October 11, 2021 at the Bridges at Bent Creek in Mechanicsburg where he was a resident. He was born April 19. 1923 in Carlisle and was the son of William Carl and Blanche (Shughart) Ebener. George was married to the late Gladys (Miller) Ebener for 59 years who died March 1, 2001.

He was a 1941 graduate of Boiling Springs High School where he was class president and played trombone in the band. Mr. Ebener was the senior broker in the real estate firm George L. Ebener and Associates. He received his real estate license on May 22, 1952 and began his career at the former Paul Eichelberger real estate office in New Cumberland. After working as an agent for the former William Hooke, Sr. real estate agency, he went out on his own in 1957 and opened an office on 20 S. Pitt St. He then relocated to 44 W. High St., then to 139 W. High St. where he finished his career of six decades. In 1983, he opened a second office in Shippensburg at 430 E. King St. Mr. Ebener was a member and past president of the Carlisle Board of Realtors and a member of the PA State Board of Realtors. For many years, he served as a real estate appraiser for Dauphin Deposit Bank. Prior to his real estate career, he was co-owner of Ebener and Hubbert milk transporting business for local farmers in Cumberland County.

In addition to his late wife, Mr. Ebener was preceded in death by his infant son Donald Lynn Ebener and daughter Beth Maria Sanders who died on November 21, 2018.

A funeral service will begin with Masonic funeral rites at 11:00AM on Saturday, October 16, 2021 at Hoffman Funeral Home and Crematory, 2020 W. Trindle Rd., Carlisle, PA 17013. Interment will take place at Westminster Cemetery. To sign the guest book please visit www.HoffmanFH.com.

Published by Carlisle Sentinel on Oct. 13, 2021.
To plant trees in memory, please visit the Sympathy Store.
MEMORIAL EVENTS
Oct
16
Funeral service
11:00a.m.
Hoffman Funeral Home and Crematory
2020 W Trindle Rd, Carlisle, PA
Funeral services provided by:
Hoffman Funeral Home and Crematory
MAKE A DONATION
MEMORIES & CONDOLENCES
Sponsored by Hoffman Funeral Home and Crematory.
3 Entries
So sorry for your lose.i work at the bridge's.george was a kind man.he always had something nice to say.i will always remember him.he always wanted to give you a pencil or a toy for your grand child.he will be missed.
Lynda Clark
Work
October 14, 2021
George was the type of honest man that forms the backbone of America. He enjoyed telling the stories of driving cattle through the streets of Carlisle in the 40´s when he was a kid. He was a fixture at the various firemen´s festivals. The fall outings at his cabin in the mountain were always enjoyable. It was a pleasure to know George and to consider him as a friend. He will certainly be missed.
Wayne F. Shade
Friend
October 13, 2021
Dear Sharon and Family, What a lovely tribute to a life well lived. I have fond memories of your father from our childhood days. May he Rest in Peace. My deepest sympathies.
Jerriann Loose Manze
October 13, 2021
Showing 1 - 3 of 3 results