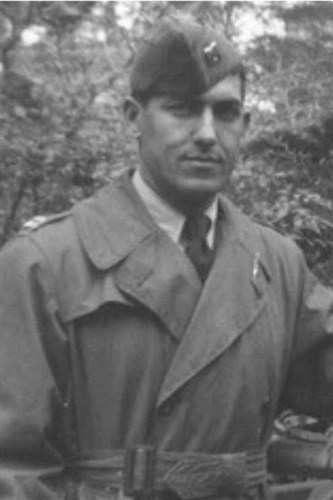 Samuel Lombardo LTC Ret. US Army passed away on June 11, 2021 at 101 in Pensacola, FL. Born July 12, 1919 in Caraffa, Italy to Pietro Lombardo and Agata Iofrida, he emigrated with his mother and 2 sisters in October 1929 joining his father who was established in Juniata Gap, a few miles north of Altoona, PA. There he grew up during the depression hunting and fishing in the woods behind his home to help feed the family. In 9th grade he quit school to help his father learning the stone mason trade and ultimately becoming a Master Stone Mason himself. On Nov 11, 1939 he enlisted in the Pennsylvania National Guard and went on to Officer's Candidate School in Ft. Benning GA. As the war progressed he volunteered for combat duty and joined the 99th Infantry Division which landed him in Normandy in November 1944. He and his platoon fought through the Battle of the Bulge, the Remagen bridgehead, the Ruhr pocket and on to Berlin. During this time his platoon made the first American flag to cross the Rhine river for the 99th division from scraps of material they found along the way. It is now displayed at the Infantry Museum in Ft Benning GA. During the war he received 2 Bronze Stars, one with valor and a Silver Star.

After the war he and his family moved to Southern California where he re-enlisted and had a 20 year career to include time in Japan, Korea and Vietnam as an Intelligence Officer. He also married June Peralta and had two children. He graduated from the Army Language School in Japanese and could speak, read and write fluently. Upon retirement, he worked in Civil Service retiring to an avocado ranch in Fallbrook, CA. Always learning new things, he made award winning wine, grew the giant pumpkin and made suburb pumpkin pies, played golf to include a long friendship with Arnold Palmer and continued to use his stone mason talents to build wine cellars.

Eventually he moved back to Pennsylvania settling in Carlise where he and second wife Jean lived for many years. While there he received the 4 Chaplain's Medal and the French Legion of Honor and was recognised by the Pennsylvania Senate as an outstanding citizen. After Jean's death, he moved south to Destin and then to Fort Walton Beach where he lived in a Senior Living home until he required more care and was moved to Pensacola near to his two children Mark and Michele Lombardo along with Mark's wife Cheryl.

When he first arrived in America, his father told him 3 things...learn English, be a good citizen and be an American. He accomplished all 3 to the max.

He was preceded in death by his parents, three sisters (Josephine, Paula, and Agatha, and one brother Peter) and his first and second wives. He is survived by his two children and daughter-in-law, one grandchild Deanna Lombardo and a younger sister Jeanette Motta as well as many nieces and nephews to include family in Italy where he was born.

Services will be held Saturday, June 19th at the Emerald Coast Funeral Home and Reception Center, 161 Racetrack Road NW, Fort Walton Beach, FL 32547. Visitation will be at 1000 followed by a service at 1100 with a reception to follow.

Expressions of love and sympathy may be placed and viewed at www.emeraldcoastfuneralhome.com

To plant trees in memory, please visit our Sympathy Store.
Published by Carlisle Sentinel on Jun. 16, 2021.
MEMORIAL EVENTS
Jun
19
Visitation
10:00a.m.
Emerald Coast Funeral Home
161 Racetrack Rd NW, Fort Walton Beach, FL
Jun
19
Service
11:00a.m.
Emerald Coast Funeral Home
161 Racetrack Rd NW, Fort Walton Beach, FL
Funeral services provided by:
Emerald Coast Funeral Home
MAKE A DONATION
MEMORIES & CONDOLENCES
Sponsored by Emerald Coast Funeral Home.
2 Entries
I remember Mr. Lombardo well from the retirement community he and his wife lived in at Carlisle PA. I remember that Sam decided to grow the world's largest pumpkin one year, so they gave him a plot of land and he worked hard on it. Another memory is when we re-did a courtyard, Sam laid all the brick pavers and told us about working with his dad doing masonry. The last memory is from 9/11/01 when Sam put on his uniform and went down to the recruiting office to see if he could re-enlist and if there was anything he could do to help America. He was an amazing, interesting person.
Joy M.
Other
June 18, 2021
Sam was a proud American and greatly admired. He will be missed but his memory will remain.
COL(R) Art Bradshaw
June 16, 2021
Showing 1 - 2 of 2 results