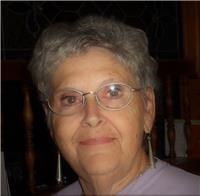 Her parents returned to the Ash family farm in Broken Bow, Nebr. when she was a toddler.  She grew up attending Sunday school and church at the First Christian Church.

As a young girl she showed a talent for singing and playing the piano.  She and younger sister, DeDe, never tired of playing their version of "Name That Tune." They took tap dancing lessons together and played with paper dolls for hours. They loved to go to the garden with a salt shaker and eat tomatoes and peas. Also, eating fresh plums and mulberries fresh from the tree was a treat.

The family went on many picnics to the Gates River and always had a large Fourth of July celebration, complete with making homemade ice cream. Many lazy summer days were also spent at New Helena with the family on picnics and her mom would pack a delicious meal for all to enjoy while her dad would fish hoping for a catch of the day.

During the long, deep snow winters, a corn shovel served as a sled for going down the hills on the farm. Val loved going to the movies at the Bow Theater and continued her love of them throughout her life.

In high school, Val excelled in home economics class and was on her way to becoming an amazing seamstress, cook and homemaker. She graduated with the class of 1959, the same year her younger sister, Vivian, started kindergarten.  Val graduated from the Grand Island Beauty School and received her cosmetology license.

Her next life venture was a return to California. She married William J. (Bill) Teahon, on June 6, 1963 in the little white chapel at Knottsberry Farm in Anaheim, Calif. They lived near Santa Ynez at Rancho Felicia where Bill was employed. They became the parents of two sons, Timothy John and Terry James.

Val and Bill shared a love of country music and were excellent dancers. They also enjoyed square dancing for several years. At one time, Val's petticoats lined the laundry room ceiling.

The family moved back to Halsey to own and operate the Double T Bar with Bill's brother Lee and his wife, Rita.  The bar became a gathering spot for miles around and was known for live music dances and annual mountain oyster feeds for loyal customers.

The lure of the west entered again and Val and family moved to Del Norte, Colo. where Bill again worked on a ranch. This was a picturesque and mountainous area and the boys enjoyed skiing near there. Getting further west, Bill accepted a job at the Hohner Cattle Co. in Oakland, Calif. and Val became a manager for a large apartment complex there.

Moving toward retirement, Val and Bill began looking to settle in Arizona. They found a beautiful southwest style home in Prescott Valley on Valley View Drive. It became the destination for biannual family and friends gatherings, complete with deep-pit barbecues, music, dancing and fellowship.

Val was a strong, confident, inspiring woman, and was devoted to her family. She had a no-nonsense approach to life and a deep, abiding faith that never wavered in any circumstance.