DR. ALBERT WALKER
1920 - 2011
BORN
1920
DIED
2011
FUNERAL HOME
Nash-Nelson Funeral Home
141 N. Maple Street
Hinckley, IL
Dr. Albert Walker, 91, retired professor of journalism at Northern Illinois University, died June 22, 2011, at Oakcrest DeKalb Area Retirement Center. He was born Feb. 15, 1920, in Newton, Mass. He retired in 1990 after 23 years, but returned in 1995 to teach part time to 1998.
A veteran of World War II and Korea, he joined Northern Illinois University faculty in January 1968 to establish a public relations sequence in the Journalism Department. He helped to establish the department's graduate program in journalism and was its coordinator until his retirement. He founded a charter chapter of the Public Relations Student Society of American and was the director of the department's graduate program.
His professional career consisted of six years as a reporter and 10 years in public relations, before beginning his teaching career.
Dr. Walker was an accredited member of the Public Relations Society of America, which recognized him with its Outstanding Public Relations Teaching Award in 1976 and Outstanding Faculty Advisor Award in 1989. He also belonged to the Society of Professional Journalists and the Association for Education in Journalism and Mass Communication.
He graduated from Baker University in Kansas and Northwestern University's Medill School of Journalism in Evanston. He earned a doctorate from Case Western Reserve University, Cleveland, Ohio.
He is survived by his three daughters, Barbara Walker-Thoreson of Phoenix, Ariz., Margaret Walker-Pollak of Chicago and New Orleans, La. and Ruth Walker-Williams of Elburn.
Cremation has taken place at Anderson Funeral Home Crematory, DeKalb.
A private interment service will be held at Clark Cemetery in Millersburg, Ohio, where his wife, Mary Margaret, was interred in 2010.
Memorials can be made to the Albert Walker Memorial Fund for DeKalb County Hospice in care of Anderson Funeral Home, Ltd., P.O. Box 605, 2011 S. Fourth St., DeKalb, IL 60115.
For information, visit www.AndersonFuneralHomeLtd.com or call 815-756-1022.
Published by Daily Chronicle from Jun. 25 to Jun. 26, 2011.
To plant trees in memory, please visit the Sympathy Store.
MEMORIAL EVENTS
To offer your sympathy during this difficult time, you can now have memorial trees planted in a National Forest in memory of your loved one.
Funeral services provided by:
Nash-Nelson Funeral Home
MAKE A DONATION
MEMORIES & CONDOLENCES
17 Entries
My thoughts and prayers are with you all. I had the privilage of meeting Meg and knowing Al. I will miss our Starbuck's dates and the stories he told. He was always very proud of you girls. I am very sorry for your loss.
Teri Gensler
July 13, 2011
Dear Ruth, Margaret, and Barb: So sorry to hear about your Dad. You are in my thoughts and prayers. I hope that you and your family will find peace and comfort in knowing that he is together again with your Mom.... and we will be seeing them again some day. God Bless You
Lisa Gannon
July 2, 2011
RUTH OUR GREATEST SYMPATHY. YOU WILL BE IN OUR THOUGHTS AND PRAYERS AREA14 TEAM
Georgia Colquhoun-Pryce
July 1, 2011
Ruth,
So sorry to hear about your Dad's passing.
Thoughts are with you.
Lynn Rourke - Cochrane
June 29, 2011
OUR DEEPEST SYMPATHY TO MARGART;BARB; AND RUTH WE WILL MISS YOUR DAD WALKING PAST OUR HOME. HE IS TOGETHER WITH MEG.LOVE, DICK AND JO ANN BOARDMAN
JoAnn/Dick Boardman
June 29, 2011 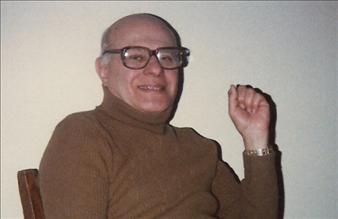 Thank you to everyone for your comments and support. We will miss dad very much, but knows he is in his place next to mom.
He was a great teacher and mentor but also a great father
Margaret Walker
June 29, 2011
Ruth & Family,
Deepest Sympathy to you and your family. The obituary is wonderful testament to a very full and accomplished life. His legacy will live on forever. May you find comfort in all the wonderful memeories you hold in your heart with your Father.
Maek Oumedian
Mark Oumedian
June 29, 2011
Ruth and family - my deepest sympathies to you. You are in my thoughts and prayers.
John McIntyre
June 29, 2011
With our condolences to the family... Who knew that Prof. Al Walker would lead me to a successful career and a husband?! First the career: While it may not be unusual for students to get that Aaaha! moment sitting in Dr. Walker's class, it was for this reporter/ editor on the Northern Star. Listening to him explain PR case studies and hear his invited guests tell their stories, I was hooked. He taught me how I could still use my skills from my beloved Northern Star to become a successful PR professional and he was right. Under his guidance, I learned how to problem-solve, ask the right questions and push the envelop on creativity. Dr. Walker could be tough and in my first few classes I found him to be intimidating. But, I soon learned that beneath that hard exterior was a much softer man--one who truly believed in the art of PR and who took great pride in seeing his "kids" succeed.

Now, the husband: During one of our lectures, Al Walker spoke of one of his graduate students whose timely thesis was on the Critical Role of PR in Healthcare Marketing. In fact, it was of such interest that it was stolen out of the university library. Years later, I met my husband-to-be and as we were comparing notes, he told me about a professor who had a profound influence in his life. He shared classic Al Walker stories including his about the stolen thesis. The romance was born!

Today, my Al and I have had a thriving PR and continuing education business for more than 20 years--and we owe our success in large part to the one and only Dr. Al Walker.
--Al Blitz & Caron Weil Blitz, Riverwoods, IL
Caron Blitz
June 27, 2011
Dr. Albert Walker was truly a great man and one of the great visionary pioneers in public relations education. He inspired me to earn a doctorate and to become a public relations scholar and educator. Dr. Walker had both tremendous knowledge and great wisdom, and he was always able to motivate me to perform to the best of my abilities. He will be greatly missed, but his legacy will never be forgotten, and his many contributions to public relations education and professional practice will live on.

Dr. Dean Kruckeberg, APR, Fellow PRSA
Professor, Department of Communication Studies,
And Executive Director, Center for Global Public Relations
5044 Colvard
University of North Carolina at Charlotte
9201 University City Blvd.
Charlotte, NC 28223-0001 USA
Ph.: (704) 687-0770; Fax: (704) 687-5286
E-Mail: [email protected]
Dean Kruckeberg
June 27, 2011
Dr. Walker was singularly responsible for kicking my academic butt just when it needed kicking. He was my first mentor and holds a special place in my heart for many reasons. He counseled me to stay away from academia. But I became a professor later in life partly to try and pass along his legacy. My best to Margaret and her sisters in this difficult time.
June 27, 2011
Dr. Walker will always hold a special place in my heart....he loved his trade and inspired his students to do the same. He was so far ahead of his time in developing a solid internship program that helped to develop his students and lead them directly into their careers. Thank you, Dr. Walker, for playing a significant role in my life.
Carrie Reckert
June 27, 2011
My condolences to Barbara, Margaret and Ruth. Your dad was one of the NIU Journalism Department's stars and his expertise in public relations education was unsurpassed. He and your mom, Meg, enjoyed a long and close friendship with my parents and spent many a happy time together. May they both rest in peace.

-Virginia (Grubb) Seymour
June 27, 2011
Al Walker was a great man who inspired and motivated many. He made a significant impact in the marketing community through his work and passion for public relations education.
Laurie Scanlon Hobbs
June 26, 2011
Dear Dad,

You were well loved and we will miss you. Say hi to Mom!!!

Love, Barb
June 25, 2011
Many careers of NIU PR graduates are the result of Al Walker’s incredible contacts in the Chicago PR community. As one of his NIU journalism departmental colleagues, I feel that he surely made a positive difference for us all.
Avi Bass
June 25, 2011
Miss you, Dad!