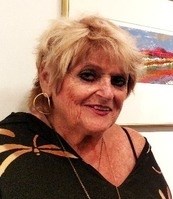 BORN
1939
DIED
2021
FUNERAL HOME
Beverage Family Funeral Home
104 Terry Street
Sandwich, IL
Dale Osterle
Dale Osterle, of DeKalb, Illinois, passed away on August 28, 2021, after a long struggle with her health. The longtime artist and gourmet caterer was known for her wonderful and well-attended parties (particularly in the 1970s and 80s), her dedication to art of all kinds, passion for jazz music, and her delicious cooking. Her fine art and cooking were among the highlights of a life dedicated to her friends, family, and fun.
She was born in the early Spring of 1939 in Massachusetts as the only child of her parents, Charles and Ida, of Newton, Mass. She graduated a year early from high school and spent the summer traveling Europe before starting her Bachelor of Fine Arts degree program at the Rhode Island School of Design in Providence, RI, where she made wonderful, life-long friends and met her future husband, who was working toward his PhD at Brown University at the time.
On January 11, 1963, she married Heinz Osterle. Together, they lived in Clinton and New Haven, Conn., Washington, DC (where their two sons were born), New York City (where their daughter was born), and finally settled in DeKalb, Illinois in 1972 for Heinz's tenure-track position at Northern Illinois University. Dale was a city girl through-and-through, and so she quickly established a large circle of friends all over northern Illinois and frequently made trips into Chicago. Her many friends over the years, near and far, expressed amazement and enthusiasm for her independent spirit, wonderful food, award-winning art, and her staying power in virtually every social context. In better times, she was a true friend to those in need, and she certainly made the City of DeKalb a lot more interesting and glitter-filled.
She is survived by one of her two sons, a daughter, seven grandchildren (Missouri and Tennessee), and four great-grandchildren. She was preceded in death by her son and more recently by her husband.
There will be no funeral service. The greatest expression of condolences may be made with a donation of any amount to The Women's Caucus for Art, Chicago Chapter, where she served as Chapter President for two terms: http://www.chicagowca.com/support.html Funeral arrangements were entrusted to Beverage Family Funeral Home. Online condolences may be made at www.beveragefamilyfh.com
Published by Daily-Chronicle from Aug. 31 to Sep. 1, 2021.
To plant trees in memory, please visit our Sympathy Store.
MEMORIAL EVENTS
To offer your sympathy during this difficult time, you can now have memorial trees planted in a National Forest in memory of your loved one.
Funeral services provided by:
Beverage Family Funeral Home
MAKE A DONATION
MEMORIES & CONDOLENCES
Sponsored by Beverage Family Funeral Home.
0 Entries
Be the first to post a memory or condolences.