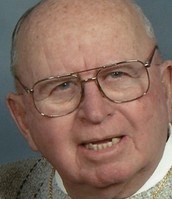 BORN
1932
DIED
2021
FUNERAL HOME
Burkhart-Eighner Funeral Home
606 East Arnold Road
Sandwich, IL 60548
Dwight M. Klotz
Born: August 24, 1932 in Sandwich, IL
Died: April 24, 2021 in Big Rock, IL
Dwight M. Klotz, 88, of Big Rock, IL passed away Saturday, April 24, 2021 at his home surrounded by his family in rural Big Rock, IL. He was born August 24, 1932 in Sandwich, IL the son of Glenn and Eleanor (Voss) Klotz. He married Patricia Nelson on July 20, 1952 in Somonauk, IL and later married Irene Allen on April 7, 1991 in Sandwich, IL. He was a member of Salem Lutheran Church in Sandwich, IL and served on the board for several years. Dwight was also on the Hinckley-Big Rock School Board for eight years. He farmed the area since 1952, with the help of his children. He loved traveling and telling jokes. Dwight was an avid Cubs fan. He enjoyed watching college basketball games. He was a social butterfly and talked to anyone he met. He is survived by his four children; Michael (Joyce) Klotz, Gregory (Renee) Klotz both of Big Rock, IL, Vicky Wielert, Melinda (Tim) Engel both of Hinckley, IL; six stepchildren Joan (Don) Haffenrichter of Yorkville, IL, Larry (Laura) Allen of TX, Patty Allen of CA, Susan Allen of Yorkville, IL, Debi Merriken of TX, John (Christine) Allen of CA; several grandchildren, and numerous great-grandchildren. He was preceded in death by his parents; his two wives; one daughter Gay Coakley, one stepdaughter Julie Allen, one brother Jacque Klotz, one great grandson Jeffrey S. Klotz, and two son-in-law's Randy Wielert and Barry Coakley. Due to Covid-19 restrictions, there will be no visitation. Private Graveside Service will be held on Wednesday, April 28, 2021 at 11:00 a.m. at Oak Ridge Cemetery in Sandwich, IL with Pastor Wayne Derber officiating. In lieu of flowers, memorials may be directed to National Ataxia Foundation, or Vita's Hospice. For more information, or to sign the online guest book, please go to www.EighnerFuneralHomes.com Burkhart-Eighner Funeral Home 606 E Arnold St. Sandwich, IL 60548 (815) 786-2165

To plant trees in memory, please visit our Sympathy Store.
Published by Daily-Chronicle from Apr. 24 to Apr. 27, 2021.
MEMORIAL EVENTS
Apr
28
Graveside service
11:00a.m.
Oak Ridge Cemetery
, Sandwich, Illinois
Funeral services provided by:
Burkhart-Eighner Funeral Home
MEMORIES & CONDOLENCES
Sponsored by Burkhart-Eighner Funeral Home.
1 Entry
When we got married Dwight and Irene were among our guests. It so happened that Dwight and Irene were not married at the time, but after Irene caught my bouquet and Dwight my garter, it was inevitable.

It's a good thing that such a loving man was able to share his love with not one but two very wonderful and deserving women. It was a joy to see Dwight walking with Irene during the fair.

May your memories bring you comfort today and always.
Ginger Lang and Mark Wade
Friend
April 26, 2021